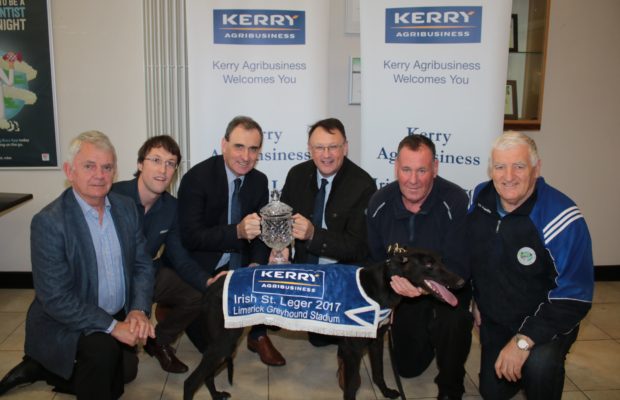 The event, which is one of Ireland’s major Classic Greyhound Racing events, carries a total prize fund of over €60,000.

Seventy-two greyhounds are expected to compete in the opening rounds of the competition on Saturday, October 7. The racing action will continue over five weeks, culminating in the Final on Saturday, November 4.

Speaking about the event, Frank Hayes, Director of Corporate Affairs, Kerry Group said: “Kerry Group is pleased to sponsor the 2017 Kerry Agribusiness Irish St Leger. Limerick Greyhound Stadium provides an impressive venue and we look forward to many enjoyable race evenings over the next number of weeks in the run-up to the final of the 2017 Kerry Agribusiness Irish St Leger on November 4.”

Phil Meaney, Chairman of the Irish Greyhound Board, added “The Irish St Leger has always proved popular with race-goers in the Mid-West and beyond. As a long-term sponsor of the Classic, we are thankful for the continued support of Kerry Agribusiness. I look forward to the opening rounds on the 7 October, and another exciting competition.”

The trap draw for the opening rounds will be made on Tuesday, October 3 at Limerick Greyhound Stadium. The stadium restaurant and admission packages are available to book now for all stages of the competition, including the Final.

This is the 16th running of the event with Kerry Agribusiness as title sponsors. The Classic has been running since 1944 in Limerick and is run over a distance of 550yds.

The Irish St. Leger was first run in the Market’s Field in 1944 and was won by No Relation, owned by Mr T. Rea, Kilmallock, Co. Limerick, in a time of 31.48. Run over 550 yards, the event is one of the most prestigious in the Irish Greyhound Racing calendar.

This is the eight running of the event in the Greenpark location, following the opening of Limerick Greyhound Stadium at the site in 2010.