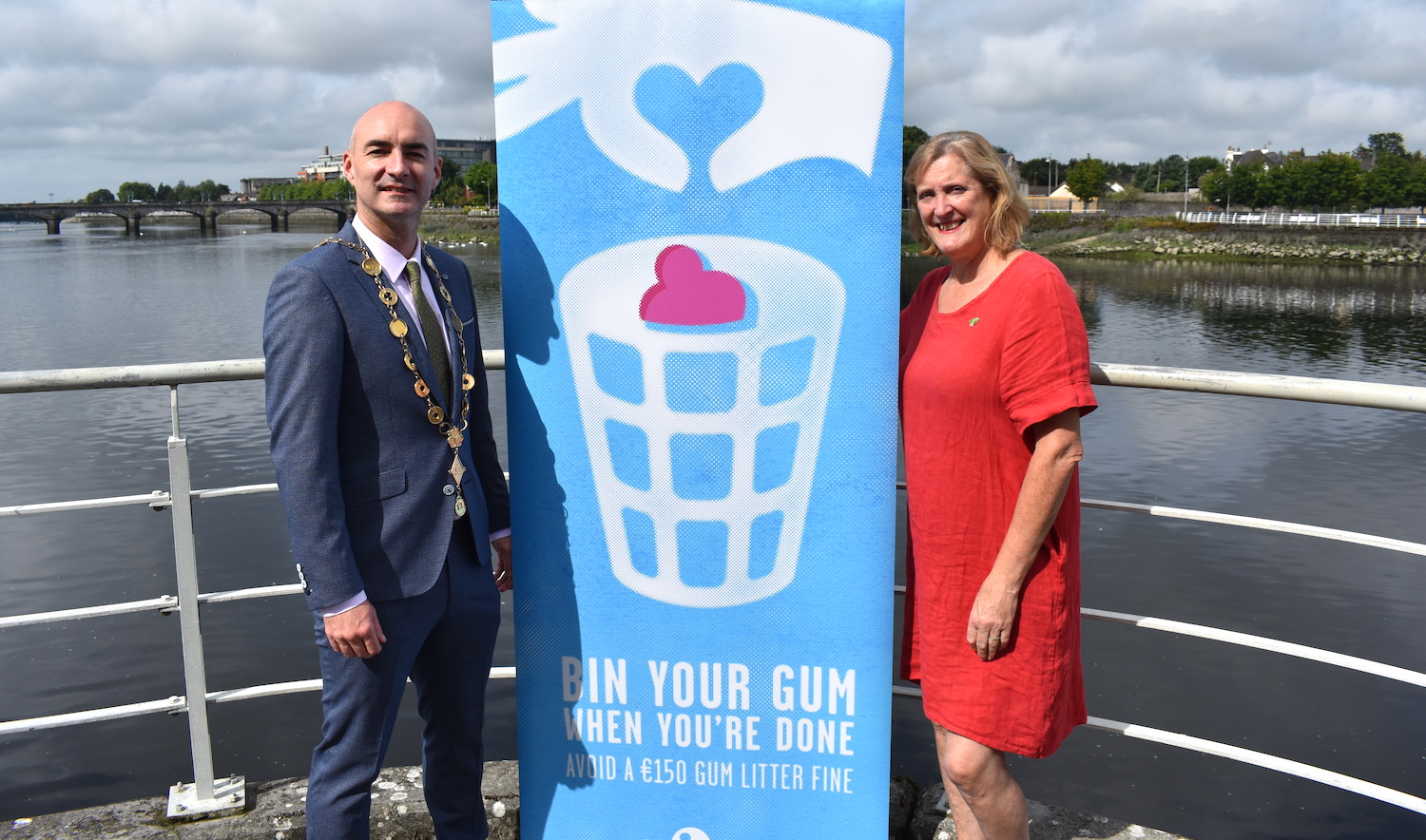 2021 Gum Litter Taskforce – pictured above are Daniel Butler, Mayor of the City and County of Limerick and Helen O’Donnell of Limerick Tidy Towns launching the campaign

The Gum Litter Taskforce (GLT) is an environmental initiative that was set up to develop and implement an awareness campaign to reduce gum litter in the most sustainable way.

Supported and funded by the chewing gum industry, the GLT initiative has made very real and significant improvements in relation to gum litter awareness and disposal behaviour over the last 14 years since its inception in 2007.

The 2019 campaign maintained an all-time high of 93% of people stating that they regard chewing gum as litter, up from 74% when the campaign first began in 2007, pointing to the attitudinal impact which the campaign has had.

The campaign is looking to build on the positive momentum of previous years’ campaigns and is making a strong return for 2021 after being postponed last year due to COVID-19.

This year’s campaign will have a stronger social media presence in order to reach a wider and younger audience.

Research commissioned by the Gum Litter Taskforce and conducted by Kantar Millward Brown during the 2019 campaign highlighted the campaign’s continued positive effect on people’s behaviour towards gum disposal.

In 2019, the results showed that 88% of people said that they always dispose of their gum correctly, which was up from 54% when the campaign first began. This shift in public behaviour has been evident throughout the 13 years that the campaign has been running, as the proportion of gum as a percentage of litter has decreased by 64%.

FDI and @ibec are delighted to launch the 2021 Gum Litter Taskforce Campaign with Minister Ossian Smyth. The campaign has been successful in educating the public on correct gum disposal behaviour with the percentage of gum as a proportion of litter dropping by 64% since 2007. pic.twitter.com/dpmzRjNT3I

Speaking at the launch, Mayor Daniel Butler said: “We can never underestimate the pride that people have in their local towns and villages. As ever, I am confident that the people throughout Limerick will do their town and local community proud by embracing the Gum Litter Taskforce campaign in an effort to invoke positive change within their local communities.”

The Mayor invited Limerick City Centre Tidy Towns Chair Helen O’Donnell to be part of this year’s launch to acknowledge the work this group of volunteers has undertaken in the city centre particularly with their current Twitter campaign targeting gum litter.

When the current campaign ends, Limerick City and County Council will re-use the campaign assets for a separate campaign later in the year.

Paul Kelly, Chairman of the GLT added: “It is great to see the GLT campaign return and continue its success in changing the public’s behaviour towards gum litter. Since 2007, we have seen a significant decline in the amount of gum litter present throughout the streets, villages and towns of Ireland. Alongside the Green Schools, Tidy Towns and Neat Streets programmes, this campaign aims to play a significant role in the overall reduction of litter and contribute to the betterment of the environment.”

“The relaunch of the GLT campaign in its revised format this year, along with our advertising campaign and Bin It! school education programme, can only be successful through continued support from our schools and local communities.”

Nicola Forde, Corporate Affairs Manager, Mars Wrigley Ireland said: “Mars Wrigley are pleased to support the return of this positive and vibrant awareness campaign in 2021. It is important that we maintain momentum on our journey to achieving a cleaner, greener Ireland through initiatives like the GLT and build on the success that the campaign has achieved since it commenced in 2007.”

“COVID-19 has brought more people outdoors to gather, socialise and enjoy the beauty of their local area. As a result, both younger and older generations are becoming more aware of the importance of maintaining the surrounding natural environment.”

“Through the GLT campaign, Mars Wrigley is proud to support the hard work of local authorities, community groups and schools in spreading awareness of the importance of correct litter disposal. It is through education that we can drive change and every little positive effort adds up to make a big long-term difference to the environs of our local towns and communities.”

For more info on the 2021 Gum Litter Taskforce go HERE