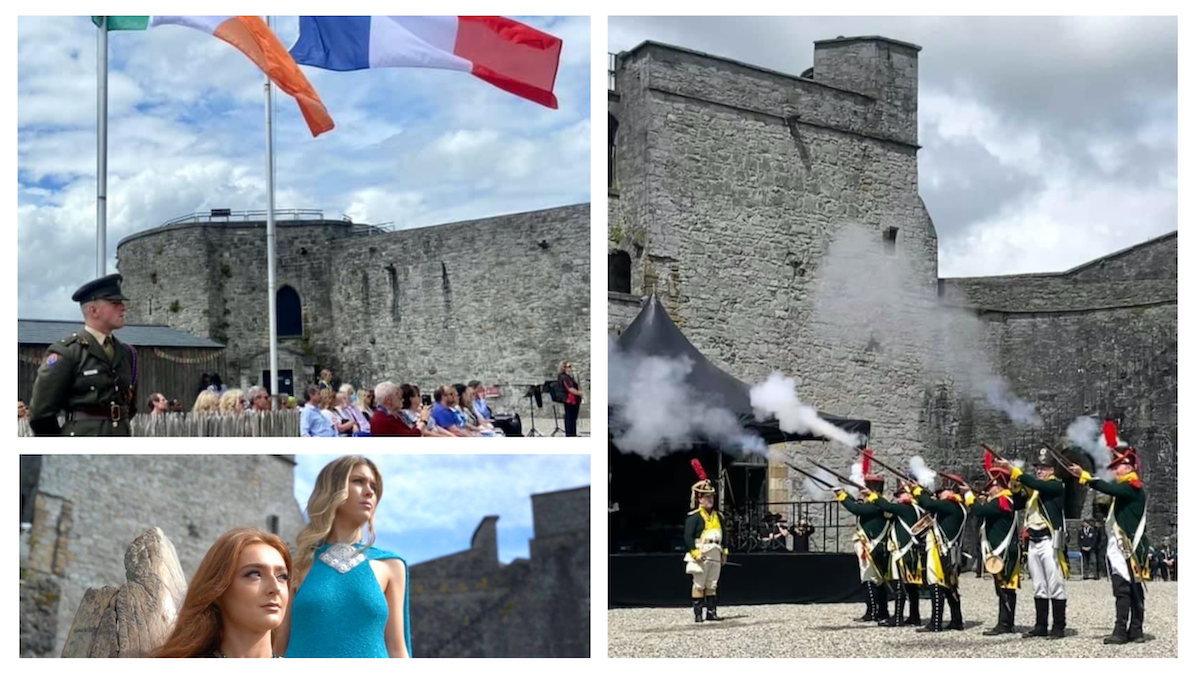 2022 Limerick Bastille is organised by Alliance française Limerick in partnership with the Limerick Civic Trust.

The Limerick Bastille Day Wild Geese Festival is back this July! Launched in 2019 by the Limerick City & County Council and the Consular Agency of France in Limerick, Limerick’s annual summer festival commemorates the Flight of the Wild Geese and celebrates the longstanding friendship between Ireland and France, now our closest EU neighbour. The festival is one of the very few cultural events listed in the joint action plan between Ireland and France signed during President Macron’s visit last August. The 2022 edition is organised by Alliance française Limerick in partnership with the Limerick Civic Trust and will be held as usual on the weekend closest to Bastille Day, the French national day (15,16 & 17 July).

The 2022 Limerick Bastille will begin on Friday 15 July with an open-to-all two-day conference bringing together some of the best experts on the Wild Geese and Irish migrants in early modern Europe. The first day will take place at Mary Immaculate College and the second day in St John’s Church, John’s Square. The event is free for all but pre-registration is required (see links on the festival’s programme). The conference is funded by an Irish Research Council’s New Foundations award secured by Dr Liam Chambers, Head of the History Department at MIC.

Dr Chambers said, “We are looking forward to welcoming a group of distinguished international speakers to Limerick to share their research and insights during the festival.”

On Saturday, July 16, a boules tournament will be held in the Hunt Museum garden where historical reenactors from En Garde will set up their Living History Camp and where live performances by the Limerick School of Music, the St Mary’s Prize Band and Scoil Ui Ruairc will take place in the afternoon.

The day will culminate with an amazing international fashion show which will be held in St Mary’s Cathedral at 8pm with over 30 French and Irish designer brands on display. Co-organised with the Holman-Lee Agency, this exceptional event will focus on diversity and sustainability in the fashion industry and will be entitled the Honora French & Irish Sustainable Couture Show as a tribute to Lady Honora Burke, Patrick Sarsfield’s wife, whose style and charisma made a sensation at the royal court of Saint-Germain in France where the couple had gone into exile following the Flight of the Wild Geese in 1691. The event is supported by the LCCC and organised in partnership with the French Embassy in Ireland.

On Sunday, July 17, a parade and flag-raising ceremony supported by the Defence Forces and veteran associations will take place at King John’s Castle and will include the performance by the Irish Chamber Orchestra and special guests (including Jean-Michel Veillon) of “Symphony 32 / Siansach 32”, an original piece of music written by French composer Dr Erick Falc’her-Poyroux in honour of the centenary of Ireland’s partial independence. The performance will be conducted by French-Irish maestro Robert Houlihan and is part of Limerick’s Decade of Centenaries and of the UL50 programme of celebrations. It is organised in partnership with the French embassy and the Irish World Academy of Music & Dance, with the support of the Fondation Nantes Université, the GIS Eire and the French Society for Irish Studies (SOFEIR).

Live music and street animations will mark the end of this year’s festival on Nicholas street. Dr Loïc Guyon, Honorary Consul of France, Alliance française Limerick Cultural Coordinator and founder of the festival said “We are all very excited to celebrate again Limerick’s local history and Ireland’s special connection to France through three days of free educational events, entertainment, fun and artistic performances for all. I am very grateful to the many local businesses and entities who are supporting us and, of course, to our official sponsors, Heavey Technology, Saint-Gobain and Arup Consulting Engineers for their generosity without which our festival could not exist”.

Ms Patricia Roberts, Chairperson of the Limerick Civic Trust, said, “The Limerick Bastille Day Wild Geese Festival is an exciting celebration of Ireland and France. This summer festival, now in its third year, is a well-established annual event. It celebrates our heritage and culture through a range of events specially curated by a passionate hardworking voluntary committee.  The festival promotes our unique Treaty City, its music culture, fashion couture, our food culture and much more.”

The full festival programme can be found on the Limerick.ie website or HERE