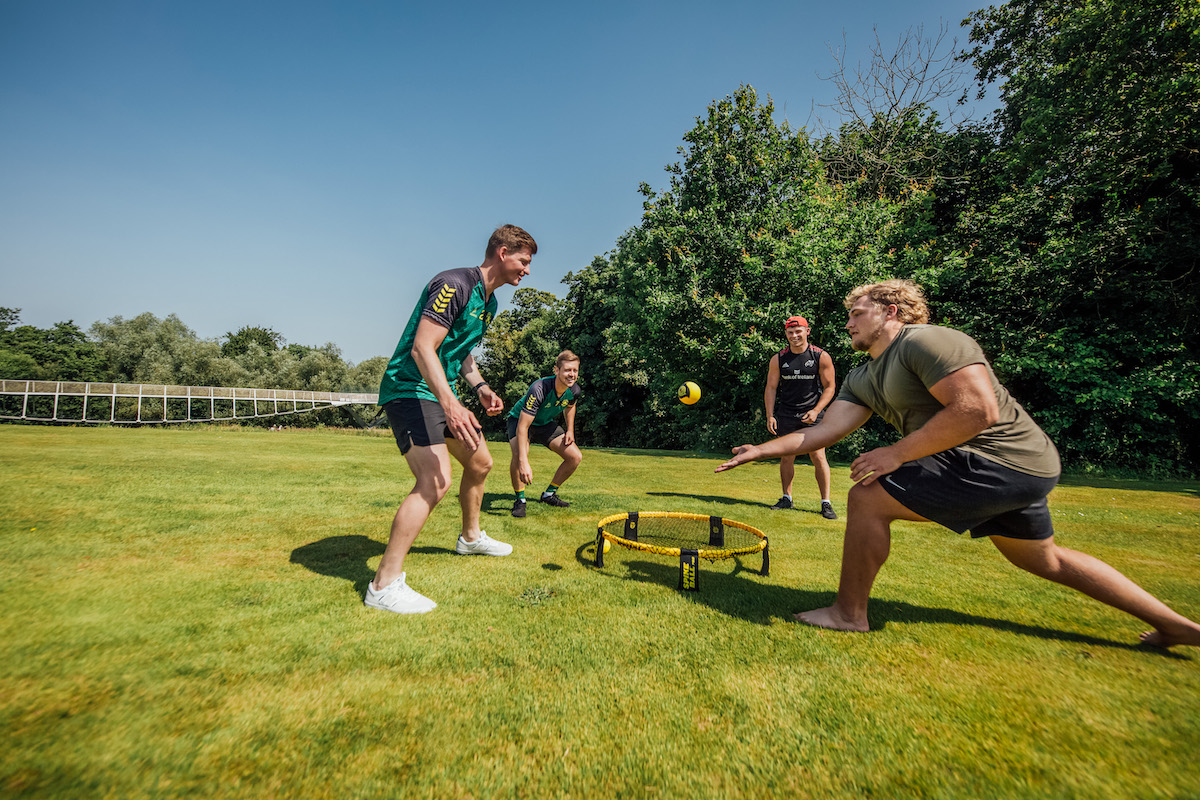 Featuring 200 teams and their supporters from 15 European countries

Limerick is set to host the 2022 Roundnet European Championships this coming August. Over 500 participants will travel from 15 European countries to attend the Championships in UL on the 6th and 7th of August.

Limerick was chosen to host the European championships for this new alternative sport, which is taking over Ireland’s parks, beaches, and back gardens each summer, following a bid by Roundnet Ireland in collaboration with UL and the support of Failté Ireland, Shannon Conference & Sports Bureau and Limerick City & County Council. The European Championships were first awarded to Ireland in 2019 and postponed for 3 years due to Covid.

A relatively new but rapidly growing sport, Roundnet first started in the US in 2011 and has grown significantly in Ireland since it was introduced in 2017. The European Championships in Limerick will be the biggest event in the history of European Roundnet.

Speaking at the 2022 Roundnet European Championships launch event, Councillor Azad Talukder, said, “Limerick has built an outstanding reputation for hosting large-scale International sporting events. Attracting such a prestigious event provides us with a fantastic opportunity to showcase what Limerick has to offer to a worldwide audience. We are looking forward to welcoming the best Roundnet players in Europe to Limerick this August to see who will be crowned at the European Championships. The response to Roundnet in Ireland over the last five years has been phenomenal and it’s very exciting for Limerick to be part of the growth of the sport. Congratulations to everyone involved, we look forward to seeing the games take off and welcoming so many European visitors to our city and county.”

Simon Leonard, Founder of Roundnet Ireland, said, “Roundnet Ireland was honoured to be selected as the European Championships hosts back in 2019, but of course in 2020 everything changed. Now, three years from the last Euro’s, we are finally getting to fulfil our dream of hosting 400 players from 15 countries at the number one sports campus in Europe, The University of Limerick. Roundnet Ireland would like to welcome both players and spectators to come along to experience this once-in-a-lifetime event and see some of the best players in Europe playing the most exciting sport in the world.”

Andrew Khuel, Head of the EURA (European Roundnet Association), commented “Roundnet Ireland has organised an amazing tournament that will go down in history. Roundnet has grown so much since Ireland won the bid to host Euro’s and as a result, this will be the biggest event held on European soil.”

Karen Brosnahan, Shannon Region Conference & Sports Bureau, said “We’re delighted that Limerick was selected to host the 2022 Roundnet European Championships this summer. Our ability to attract such events to the Shannon region is due to the world-class facilities at the University of Limerick and the strategic and collaborative approach taken by the Shannon Region Conference & Sports Bureau, Failte Ireland and the University of Limerick. Such sporting events provide a huge economic boost for Limerick and Ireland.”

Roundnet is a combination of several elements of popular sports such as volleyball, table tennis, badminton, and tennis. This sport is played by two people per team. Each team is only allowed to touch a maximum of three times as in volleyball. The game begins with service from one team to another, and each team takes turns hitting the ball back into the net which is shaped like a mini trampoline. The equipment used in the game is called Spikeball.

The European Tour series is taking place this summer with four grand slams in Romania, UK, Latvia and Germany, and finishes with the European Championships in Limerick when the best European teams will be crowned European champions in the men’s, women’s and mixed divisions. This will be the last tournament before the first ever world championships hosted in Belgium.

Roundnet has become the new sport of the summer since lockdown, in fact, lockdown almost did the sport a favour. Simon Leonard explains, “We discovered that family mash-ups, in people’s gardens, were the best fun. People were playing it safely within their homes and then in parks once things opened up again. We had 100 teams at the first tournament post-lockdown.”

“The great thing about Roundnet is that it’s for everyone – from those that don’t have a sport to the ultimate athlete. It’s easy to pick up, inclusive and social and it’s bringing together players in sports like GAA, Rugby and soccer with those who like to play sports for fun. The European Championships are a great opportunity for amateur players across the country to witness the sport at its highest level and register their interest in playing for Ireland in the future,” he continued.

Ellie Lambe, Head of Women’s Roundnet in Ireland, said “With weekly training and regular tournaments, Roundnet Ireland provides a fun and welcoming environment for all ages that allows you to get your exercise in while meeting new people. The number of women playing Roundnet in Ireland is growing through introducing the sport to schools, colleges and workplaces. It’s also growing the confidence of our players from the start and this can be seen in our standard of play.”

Roundnet Ireland is developing this new exciting sporting community through schools and university clubs. For every Spikeball set bought from Roundnet Ireland, all profits go back into their events, players and community outreach programmes.