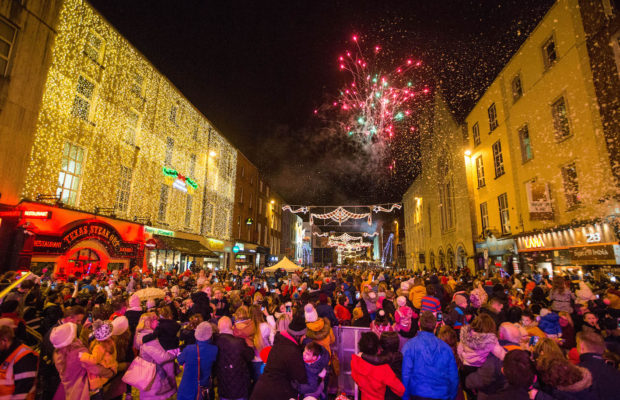 More than 300 free Limerick car parking spaces will be available for shoppers and visitors to the city centre this Christmas.

220 of the free Limerick car parking spaces are located at the Cleeve’s site, just a short walk from the central shopping area.

Parking will be available from Friday 8 December 2017 from 9 am until 9 pm every day up to and including New Year’s Eve.  The site will remain open until midnight New Year’s Eve to facilitate those wishing to attend the New Year’s Eve Fireworks.  (New Year’s Eve entertainment will begin at 8.30pm with the fireworks display from 9 pm.)

There will be round the clock security at the Cleeve’s site for the duration of the parking.

Limerick City and County Council is also making its staff car park (85 spaces) located behind its headquarters at Merchant’s Quay [access from Nicholas Street] available for free parking for the next three weekends in December.

Security will again be provided for the duration of the free Limerick car parking initiative. The spaces, called ‘Park & Strides’ are designed specifically for shoppers and other visitors to Limerick city centre to allow them to soak up the unique atmosphere of Limerick during the festive period.

Both sites provide shoppers and other visitors to the city centre with free spaces and this late night availability ties in with retailers throughout the city centre who are opening late on Fridays and extra hours on Sunday in the run-up to Christmas.

Visitors and shoppers to Abbeyfeale, Kilmallock and Newcastle West in County Limerick will be able to avail of free parking in the mornings in the run-up to Christmas.

Limerick City and County Council is to suspend on-street car parking charges every morning until 11.30am in the three towns from the 15th of December 2017.

Limerick City and County Council is to extend the availability of free parking in the county towns of Abbeyfeale, Kilmallock and Newcastle West in County Limerick during the Christmas period.

Visitors and shoppers will be able to avail of two hours free on-street car parking in the towns anytime between 9 am and 1 pm every day from the 15th of December 2017.

The promotion, which will run up to an including New Year’s Eve, is one of a number of incentives to promote the local authority’s ‘Christmas in Limerick’ campaign.

The ‘free parking’ promotion will hopefully encourage more people to pop down to the shops and continue to support businesses which in turn is helping to sustain employment locally.

Over the past number of years, Limerick City and County Council has provided free on-street parking, either in the mornings or afternoons.

However, feedback indicated that it was almost impossible to avail of this offer as all of the on-street spaces were taken and there was no little or no turnover of spaces throughout the day.

Following a review, Limerick City and County Council has introduced these Park and Strides, which will guarantee more than 200 free car park spaces every day and more than 300 spaces at weekends for the busy Christmas period.

Mayor of the City and County of Limerick, Cllr Stephen Keary said: “The provision of the ‘Park & Strides’ are in keeping with Healthy Ireland, the national framework for improved health and wellbeing.  The council is encouraging members of the public to be physically active this Christmas and walk the last 5-10 minutes of their journey to shop in the city centre.”

Dr James Ring, CEO of Limerick Chamber added: “The city is expected to be even busier over the weeks ahead and this dedicated free car parking sends out a positive signal that Limerick city centre is open for business.  We’re asking retailers to stay open late on Friday nights and on Sundays for the month of December and with a range of free family events in the city over the next few weekends, Limerick excels at Christmas time.”

As part of a sustainable transport in Limerick, members of the public may also avail of the bus services across the region to travel to the city centre.

LEAP cards offer up to 30% discount on regular fares, while the National Transport Authority has extended the city centre fare zone to encompass Ardnacrusha, Castleconnell and Clonlara meaning it is now cheaper to catch the bus into Limerick city from these areas.

This weekend (9th-10th Dec) Santa’s elves will be arriving in Bedford Row to help the children of Limerick to write their Santa letters to post into Santa’s Magic Post Box in plenty of time for the big day.

The songs of Christmas will ring out as the Musical Treats on Thomas Street (also from 12 noon) will put all the shoppers and visitors to the city centre in a festive mood.

The Christmas programme in Limerick is being coordinated by Limerick City and County Council Arts Office and the Office of Marketing and Communications with help from Grooveyard Event Management and GoldieFish events.