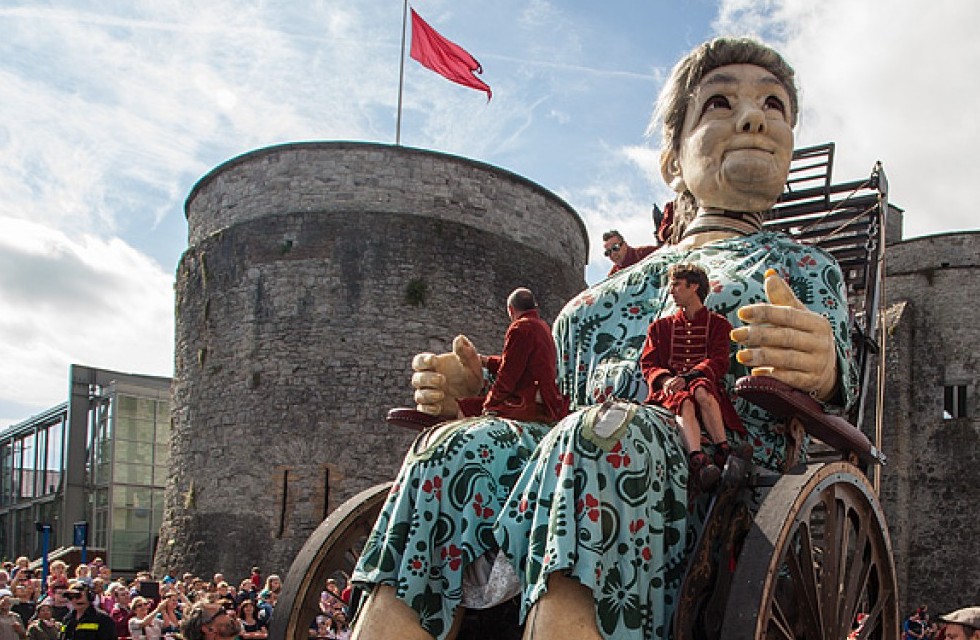 44M generated for economy by Limerick City of Culture 2014

44M generated for economy by Limerick City of Culture 2014 based on an economic impact assessment published on Mon 16 of June.

The economic impact study by Grant Thornton Ireland* assessed the impact of Limerick’s hosting of the National City of Culture title following a €12m year long programme of events which was aimed at showcasing Limerick as a vibrant city with a rich cultural community.

Over 3,000 events took place in Limerick in 2014 as part of 156 projects with an estimated audience of 1.8m people. Royal De Luxe Giant’s Journey (Granny’s visit) in September 2014 attracted the largest audience ever assembled in Limerick for a single event – 230,000 people.

A separate social impact study** also published on Monday revealed 364 new local partnerships were formed and 2,504 Limerick artists were employed in various projects as a result of the year.

Key findings of the 2014 designation based on the assessment of data by Grant Thornton include:

·       The €12m invested into the cultural services sector during the Limerick National City of Culture (LNCoC) programme generated a minimum €13.4m benefit to the regional and national economy including €1.4m indirect and induced benefits.

·       The year long programme generated a €13m cumulative advertising value (AVE) based on a total of 4,887 press and broadcast articles during 2014 (Analysis Kantar Media)

·       On average 86% of the business community felt LNCoC had a positive impact on image/perception, future confidence, business activity and social inclusion

Other key findings from the report:

·       The majority of events targeted all audiences took place in many art forms and located in a variety of situations from the street, to the domestic home, to abandoned buildings and specially constructed stages in unique one off productions

Welcoming the report, National City of Culture 2014 Board chairman Pat Cox said it was evident that the 2014 programme not only promoted Limerick as a cultural centre but also improved its image, perception, supported social inclusion and boosted the region’s economic recovery.

“Limerick National City of Culture was an ambitious project which aimed to transform Limerick into a cultural hub for Ireland, re-imagine the city and provide a great opportunity for the people of Limerick of diverse backgrounds and social standing to come together and celebrate a cultural programme over 12 months,” he said.  “We have exceeded our expectations and the objectives and I’m confident that Limerick is now being looked at locally, nationally and internationally with a fresh eye after undergoing its very own renaissance as a result of this successful designation. I’m also confident that the continuation of various cultural activities and community involvement is already generating a long term positive effect on the city and I wholeheartedly welcome this. Limerick can take confidence from it and can do so much more.”

Limerick City and County Council Chief Executive Conn Murray said it is now vital that Limerick grasps the momentum and ensures that the benefits generated from the successful hosting of the year long 2014 programme are maintained.

“Limerick was presented with a unique opportunity during 2014 to attract national and international attention and I’m particularly pleased with the feedback from the business community, the cultural vibrancy between practitioners and in communities, the scale and impact of the year and huge economic and social benefits that were generated,” he said.

We are in the midst of preparing a bid to host the European Capital of Culture title for 2020 and the experience and knowledge gained by the organisation and management of more than 3000 events will no doubt be brought to bear by Limerick’s team in our bid for the European title,” Mr Murray added.

Its key findings include:

·       83% agreed that they enjoyed Limerick National City of Culture

Citizen Researcher Sadhbh McCoy who worked on the Social Impact study said of the research:

“The word ‘Love’ is coming to mind and I know that sounds really soppy. But I think people really fell in love with Limerick again over the year and especially people who wouldn’t go to much. The year invigorated people’s love for Limerick and what Limerick is capable of.”

Adare to Survive 2015 to partner with Clionas Foundation