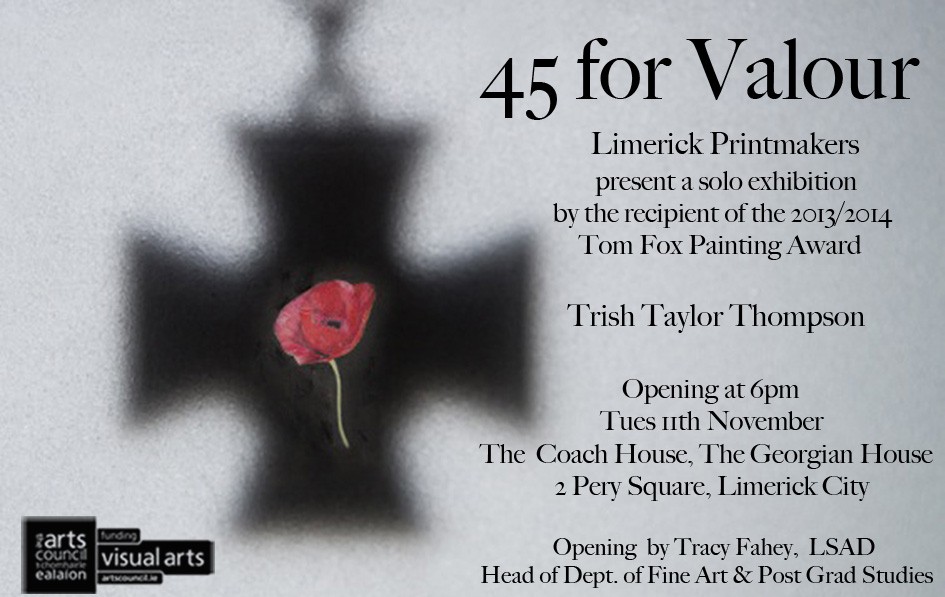 Limerick Printmakers Studio & Gallery are delighted to present 45 for Valour, a solo exhibition of new work by the visual artist Trish Taylor Thompson. The exhibition will be officially opened by Tracy Fahey, Head of Department of Fine Art & Postgraduate Studies in the Limerick School of Art & Design on Armistice Day, Tuesday 11th November at 6pm. This exhibition will be available to view Monday – Friday from 9am – 5pm in The Coach House at No. 2 Pery Square until Tuesday 9th December.

Trish Taylor Thompson is the recipient of the 2013/2014 Tom Fox Exhibition Award. This bursary has very kindly been provided by the Fox family to commemorate the Limerick based painter, Tom Fox’s untimely passing in September 2010. A prolific artist, he exhibited extensively both nationally and internationally. This award was created in his name by the Fox family to support & encourage a graduate painter in the early stages of their career by having a prominent solo exhibition in a well-established gallery. Limerick Printmakers Studio and Gallery would like to thank all the team in No. 2 Pery Square & The Coach House for helping to facilitate this exhibition.

‘45 for Valour’ is a series of oil paintings on linen created in response to the one hundredth anniversary of the advent of the First World War. This transformative period in history prompted Trish to explore in further depth the ‘war to end all wars’ from an Irish perspective. A focus developed on the forty-five Irish soldiers who were awarded the Victoria Cross for their heroic deeds during The Great War.

‘45 for Valour’ is an emotive collection of artwork that encourages the viewer to appreciate the importance of remembering those who sacrificed their lives in order to protect the freedoms and ideals of a nation. Ireland’s contribution to the history of the Great War cannot be underestimated and the Victoria Cross has always been acknowledged as one of the most coveted of all military medals.

’45 for Valour’ was influenced by a number of artists including Anselm Kiefer, John Singer Sargent, Walter Sickert, Lucien Freud and Sir William Orpen, along with musical influences such as Ralph Vaughan William’s piece ‘A Pastoral Symphony’ (an elegy to the dead of WW1) and works by Frank Bridges and George Butterworth. Inspiration for ’45 for Valour’ also comes from the work of poets John McCrae and Ewart Alan Mackintosh. The exhibition was further informed by visits to Collins Barracks in Dublin, The Imperial War Museums in London and Manchester and through researching the abundant writings on The Great War.

The body of work ’45 for Valour’ incorporates many visual expressions of the red poppy (papaver rhoeas) – which is a symbol of remembrance for all of those who served in the war. The allegorical, metaphorical and symbolic attributes of botanicals are a recurring feature of the artist’s work. The use of the poppy flower communicates the themes of fragility, beauty, delicacy and irrevocable demise that is in turn echoed so closely in the realities of war and its huge human cost.