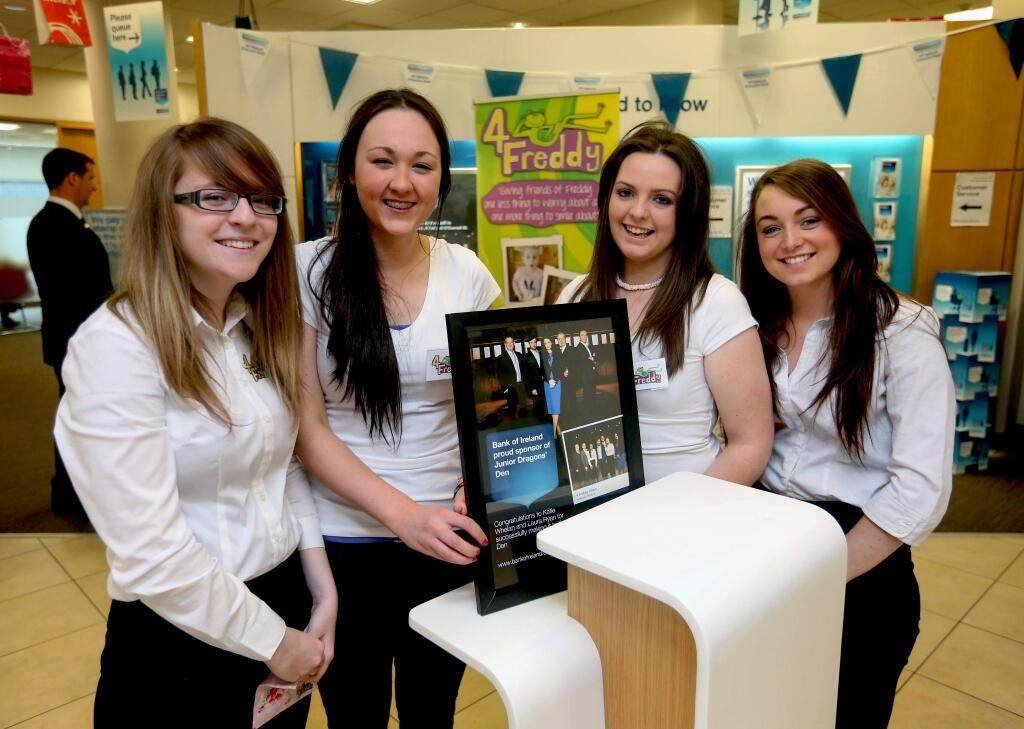 The 4Freddy Team is made up of 4 girls (Emma Cullen, Molly Power, Laura Ryan and Katie Whelan) from Ardscoil Mhuire, Corbally, Limerick.

‘4Freddy’ first began in 2013 as a simple Mini-Company idea as part of the Transition Year Programme in Ardscoil Mhuire, Corbally and The Junior Achievement Mini Company Programme. The four inspirational young students involved, Emma Cullen, Molly Power, Laura Ryan and Katie Whelan, won most innovative idea at the Dell School’s Trade Fair in 2013 and went on further with their idea, to reach the regional finals of the Junior Achievement Mini-Company Competition.

‘4Freddy’ is a company that was set-up in order to make life a little bit easier for children suffering with long term illnesses and the treatment that goes along with it. The product is a handmade 100% unbleached cotton cover that aids the protection of a child’s Hickman/Freddie line, which is essentially a venous catheter that allows easy access to veins in the long term. There is a secure safety strap around the child’s neck to hold the cover comfortably in place. The covers are durable, comfortable, colourful, and adaptable and can also be personalized by each individual patient.

In December 2013, the four brilliant girls decided to apply to RTE’s series ‘Dragons’ Den’. It wasn’t long after this that they received a phone call to inform them that they had been short listed in the last 300 out of over 1000 overall applicants. The girls later received even greater news that they had made it into the final 64 of the process. In February 2014, both Laura and Katie travelled to Dublin to attend a Trade Fair at which they showcased their idea to the producers of the hit RTÉ business reality show. The following week, the girls got a call informing them that they had made it to the final 20. This meant they would get the once in a lifetime opportunity to pitch their idea to the infamous Dragons in the RTÉ studios. Laura and Katie went on to appear on Junior Dragons’ Den on the May 18 on RTÉ1, through which they brought their amazing product to national attention. There, they delivered a professional and impressive pitch to the Dragons that ultimately saw them receive a €2000 investment bursary from the Dragon, Eamonn Quinn who was once Marketing Director and Deputy Chairman of the Irish supermarket chain ‘Superquinn’ until the company was sold in 2005. The girls expressed sincere gratitude to everyone involved and especially to Mr. Quinn for investing and believing in their product.

The four Limerick girls have given children a chance to keep “clean and cool” for the duration of their treatment. A huge congratulations to the girls for doing their school, families and Limerick proud in producing an extremely feel-good invention for the unfortunate children who have to endure unpleasant medical treatment.

‘4Freddy, giving friends of Freddy one less thing to worry about and one more thing to smile about!’