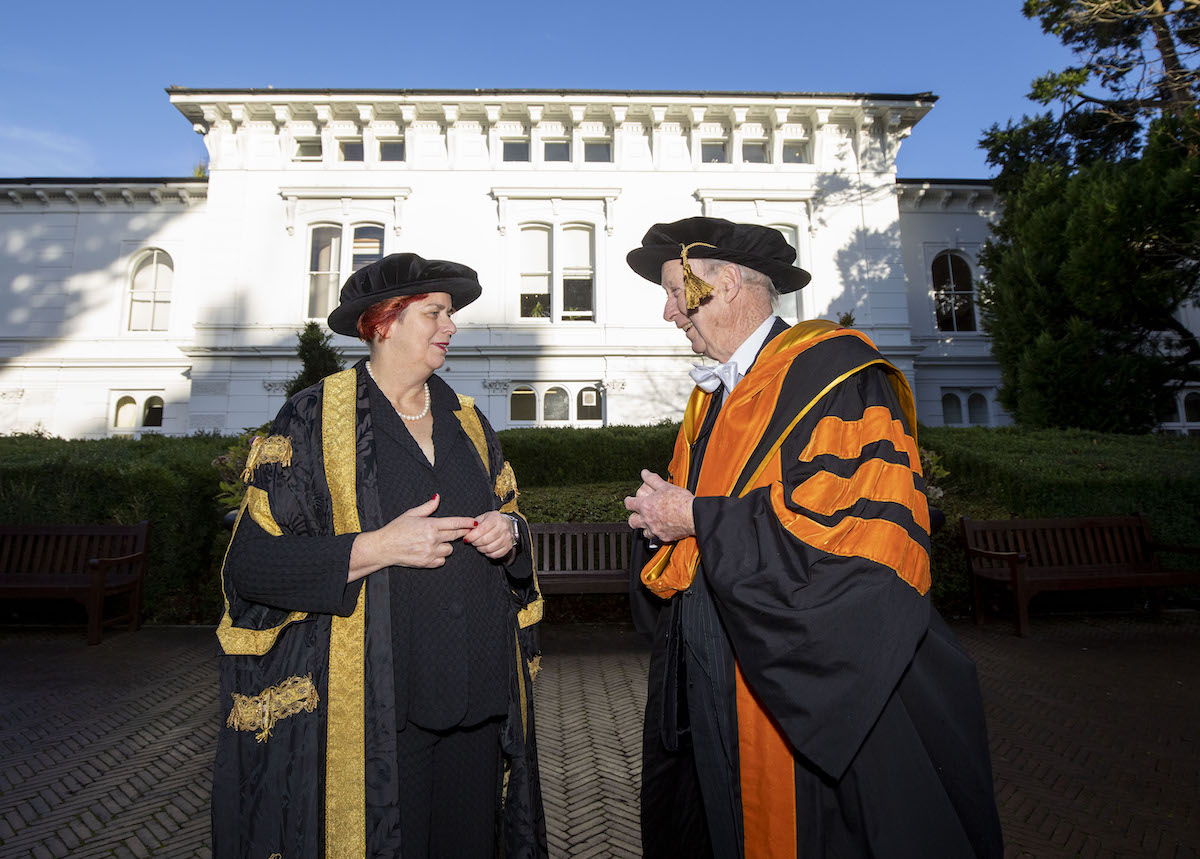 Hundreds of staff and invited guests marched in procession through the University of Limerick campus this Friday in a key event to mark the UL 50th anniversary.

The UL50 Jubilee Convocation of 500 UL faculty, staff and invited guests was convened today at the University Concert Hall (UCH) to formally mark the UL 50th anniversary of the foundation of the University’s predecessor the National Institute of Higher Education (NIHE) in 1972.

As one of the key events taking place over a year-long programme marking the anniversary of the establishment of the University, a large number of faculty, governing authority and executive committee processed behind the UL ceremonial mace from the institute’s original single building at Plassey House to the UCH.

Speaking at the Convocation UL President Professor Kerstin Mey talked about the extraordinary growth of the institution over the past 50 years and outlined ambitious plans including a commitment to anchor sustainability in all future development activity at the University.

“This public university, the first one founded after the independence of Ireland, came into being through the determination of the people of Limerick to serve as a catalyst for the economic and social transformation of the Midwest by developing graduates with much needed skills and an outlooking mindset.

“Building on and developing the talent of staff and students has been a key ingredient for the innovation of education brought about by UL since its inception: Cooperative Education, modularisation, continuous assessment, semesterisation and a strong commitment to student and staff exchanges in Europe and worldwide.

“Over the years, the high-quality research of this now comprehensive university has grown from the original blueprint and expanded in breadth and intensified in focus as is not only evident in our growth of quality research outputs, the increasing success rate in national and international competitions and respective grant capture or the lead position in Ireland in the number of patents filed, but is manifest in the proven impact of our research.

“The notion that technology must serve as a bridge between the arts and the sciences paved the way for NIHE to be developed as a conduit between the regional technical colleges and universities.

“We take this responsibility very seriously and we can build on what has already been achieved, above all, through the talent of our staff and students.”

The Convocation kicked off UL’s Gala Week which includes UL’s Alumni Awards, a reception for the original class of 1972, various events on campus and key event ‘Sounding Sionna: A Celebration of Music at UL’, which takes place in the UCH on November 24.

There will also be the launch of UL’s 50forFifty Scholarships during the gala week.

The week running up to the Convocation also saw an honorary doctoral award to Limerick hurling manager John Kiely and the inaugural lecture by Professor Kerstin Mey – just over 12 months after her appointment as the first woman president of an Irish university.

The exhibition ‘A University of Our Time: University of Limerick, 1972–2022’ in the Millstream Building near the Living Bridge, which is open to the public and explores the origins and development of the University and the institutions that went before it.

A separate exhibition is on display in the Glucksman Library called ‘50 Years of Pioneering Women at the University of Limerick Past and Present’ and which shows how women advocated for equality within the University and society. It runs until May of next year.

More than 117,000 students have graduated from University of Limerick in the past 50 years and over 20,000 international students from 136 countries have studied at UL. Over 5,800 people have been employed on a full-time capacity at UL in its fifty-year history, making it one of the Limerick region’s biggest employers.

In 1972 the campus consisted of 73.8 acres (29.86 hectares). Today the campus expands across 367 acres (149 hectares) in counties Limerick and Clare and in Limerick city. NIHE opened its doors in 1972 with a campus consisting of just two buildings – Plassey House and its stables – there are now 50 buildings on the UL campus which is also home to more than 4,000 trees.

Find out more information about UL 50

Related stories on the University of Limerick