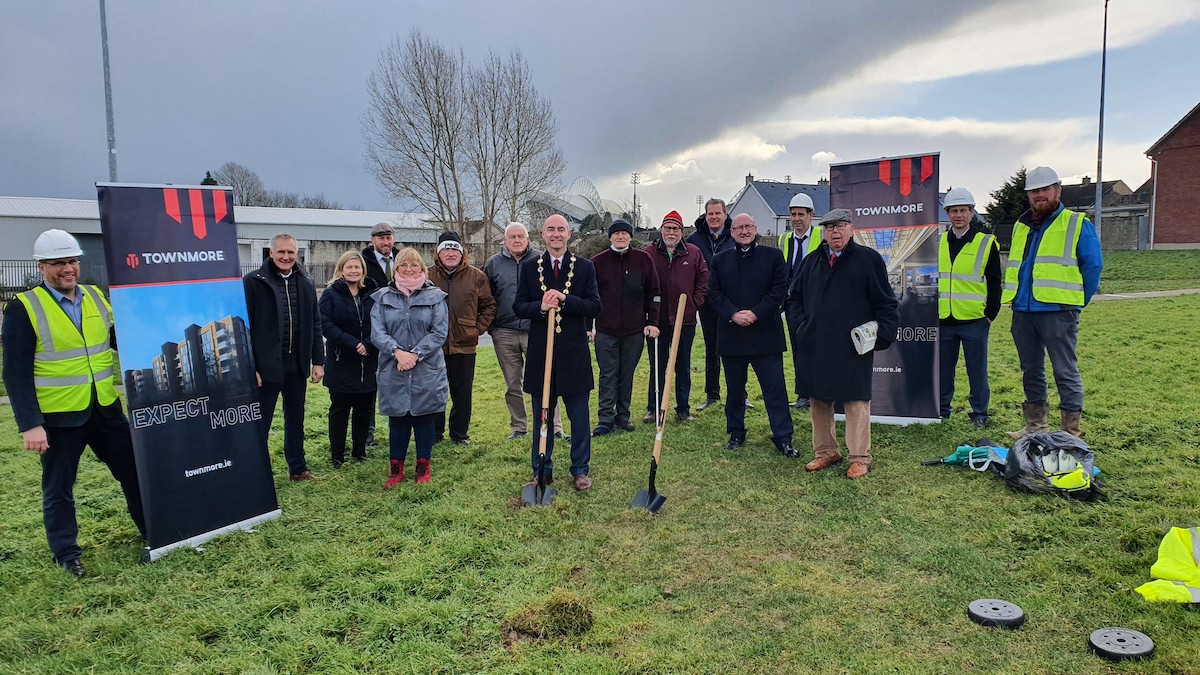 57 new Moyross homes – Mayor of the City and County of Limerick Cllr Daniel Butler at the sod turning in Dalgaish and Cosgrave Parks in Moyross in the presence of Regenerations staff, contractors from Townmore and members of the local Moyross Community.

Construction is due to begin shortly on 57 new Moyross homes as part of the Limerick Regeneration Project.

The development spans two sites in Dalgaish Park and Cosgrave Park and is within walking distance to the Watch House Cross Neighbourhood Centre, public transport and the local school and church.

The development will be a blend of one to four-bedroom homes, which will see a broad mix of people living in them.

Contractors Townmore Ltd are ready to go on-site to begin the construction phase. It is expected that it will take 20 months for the homes to be delivered. The contract also sees upgrade works to the lower sections of Moyross Avenue.

Welcoming the news at the sod-turning ceremony of 57 new Moyross homes in Dalgaish Park, Mayor of the City and County of Limerick Cllr Daniel Butler said: “This is a great day for Moyross. It is an exciting day for the community in the estate as we prepare to build on 57 new Moyross homes across Dalgaish and Cosgrave Parks. It’s important that we see new people being welcomed into the area. It is an amazing and strong community as it is and this new development can only improve that strength and unity.”

Billy Lynch, Senior Executive Engineer with Limerick City and County Council said: “This project is part of the wider Limerick Regeneration project and is funded by the Department of Housing, Local Government and Heritage. The site is split across both sides of Moyross Avenue. Thirty of the 57 homes are being built in Cosgrave Park with the remainder in Dalgaish Park.”

“Selected demolition works took place last month to prepare the site and now Townmore Construction, who won the tender for the development are going to be on site very shortly.”

The commencement of construction is the latest in a series of projects across the regeneration areas which included contracts being signed for new homes in Southill and Moyross and the Moyross Jobs Fair.