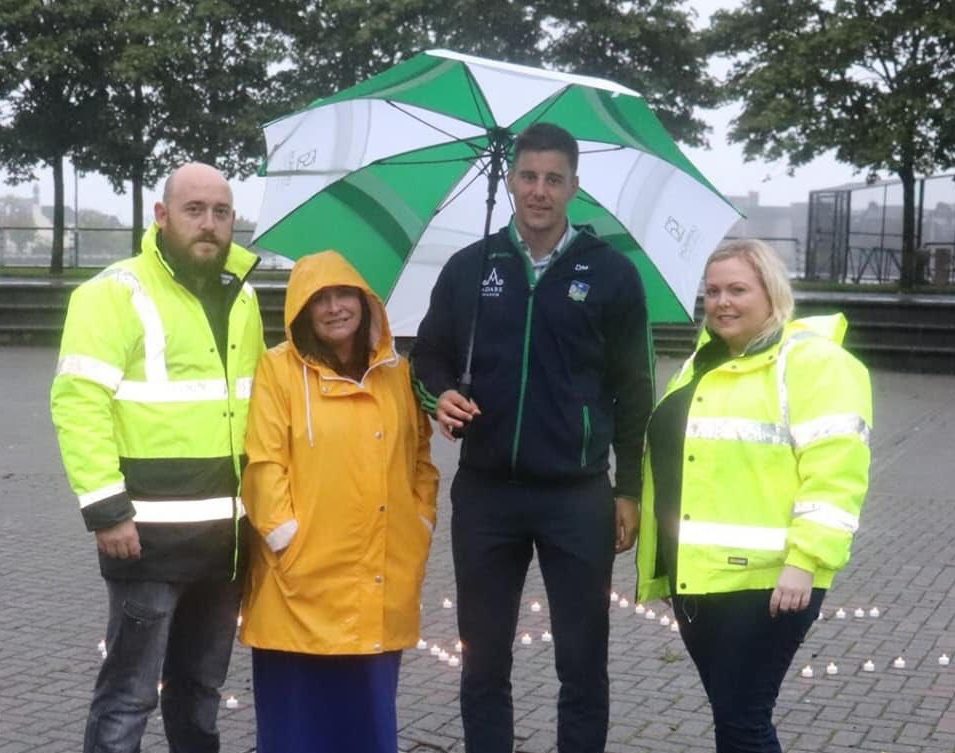 ABC Candlelit Vigil was held in Arthur’s Quay Park last night in association with A.B.C for Mental Health in honour of International Suicide Prevention Day at half seven.

A Candlelit Vigil was held in Arthur’s Quay Park on Monday evening in association with A.B.C for Mental Health in honour of International Suicide Prevention Day.

The event was attended by over 200 people in the pouring rain each holding a battery powered candle to show that those with mental illnesses are not alone and there is always someone you can talk to. The event showed great support and solidarity for those with a mental illness.

“We each have our own reality and if we reach out to another human being we realise we have empathy and empathy is what ignites hope for those with a mental illness,” Amanda Clifford, organiser of the ABC Candlelit Vigil for Mental Health event told ilovelimerick.

Dan Morrisey, All Ireland Senior Hurling Champion and Niall O’Donovan who is on the coaching team for Munster Rugby came to the event to show their support and were the first two to light their candles as everyone else at the event followed.

ABC Candlelit Vigil event was attended by over 200 people in the pouring rain each holding a battery powered candle to show that those with mental illnesses are not alone.

Everyone was stood in a circle “because it shows that there is no beginning and no end,” Amanda said. All the attendees were told to connect with the person next to them to show that everyone there had gone through tough times and lonely times and that they got through those times.

“People came over and told me their story and the people they have lost and people came over to tell me the pain they are going through now and it had a beautiful way of showing community as a whole that we can make a difference if we work together,” Amanda said.

The Samaritans and Limerick Suicide Watch also attended the event to show solidarity and support. The event was free of charge and kicked off with music and was a beautiful night even though the rain was non-stop pouring down.

Amanda would like to thank everyone for coming to the event on Monday for being understanding and supportive and being the light for everyone who would need it.

Related Topics:ABCarthur's quay
Up Next

Elemental Presents returns to Limerick for a weekend of great events

A Narrative for Limerick: Nameless