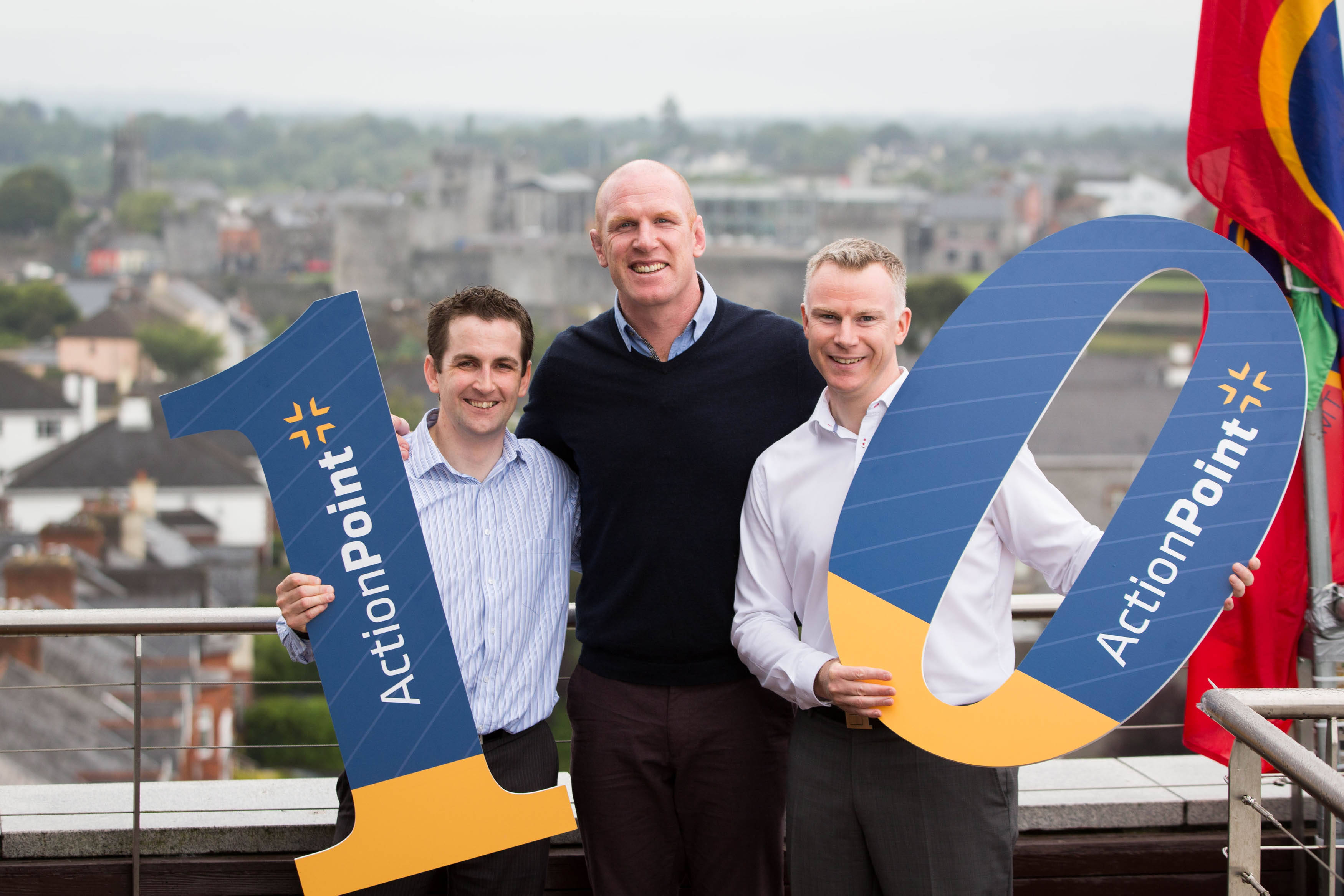 One of Limerick’s fastest growing indigenous technology companies, Action Point Technology Group, has celebrated ten years in business by renewing its partnership with Munster Rugby to deliver technology services and software requirements for the province for a further two years.
The deal was announced at the Action Point 10th anniversary celebration in The Stand Hotel in Limerick with Munster representatives, Director of Rugby Rassie Erasmus, Conor Murray and Sam Arnold, and former player Paul O’Connell in attendance.The deal will see Action Point, with the support of Dell products, continue to manage the IT requirements for Munster Rugby and Thomond Park. This involves delivering a full suite of technology services including IT security, managed services, preventative maintenance, and help desk support. action point 10th anniversary
Addressing the event, Action Point CEO David Jeffreys said, “We started out in this business ten years ago when the economy was flying but we all know what happened after that. We worked extremely hard throughout that period and have most definitely come out the other side but it was due to a great team, a strong vision and really supportive clients.
“It was also due to the ‘can do’ spirit of the environment we are in, in the National Technology Park, a lot of which comes from the innovation at the University of Limerick. Certainly in that period the IT ecosystem strengthened in Limerick and I see a very positive future for Action Point, and the city in general as a technology hub.” action point 10th anniversary
Commenting on the Munster Rugby partnership, Jeffreys said, “We have had an extremely positive working relationship with Munster for 5 years and the decision to extend this relationship for a further two is a very positive endorsement of what we do at Action Point. We have no doubt the province are about to embark on a new era of success and we are delighted to support them every step of the way.”
Enda Lynch, Munster Rugby Commercial & Marketing Manager added, “Action Point have been a fantastic partner to work with since they joined the Munster family five years ago. As we prepare for a new and exciting season ahead, it is wonderful to have the continued support of Action Point both as a sponsor and in supplying us with our IT requirements.”

Action Point was formed just over 10 years ago by David Jeffreys and John Savage, both graduates of UL’s Computer Systems degree course. It delivers an unrivalled mix of technology and software development services to clients in Ireland, the UK and US.
The company’s software development solutions involve a bespoke technology innovation partnership, including a highly skilled and multi-disciplined team, to take client companies from concept through to ‘go-to market’ stage. Its technology services include design, installation and management of technology services for medium size to large companies. Services also include risk minimisation and disaster recovery solutions, involving both storage and virtualisation, as well as cloud.
In the current financial year Action Point expects to reach €10 million turnover, which is over five times that of what it achieved five years ago. It has some 250 leading national and international clients, including Coillte, Chill Insurance, Mazars, the GAA, AGA, the National Lottery, Eflow and more locally but yet national and international brands such as UL, Kirby Group, Holmes O’Malley Sexton, Cook Medical, Regeneron. action point 10th anniversary
It has taken a lead in forging strong customer services around the Internet of Things through its strong partnership with Dell and other key partners across the US, UK and Ireland. The company’s close partnerships with Dell, Microsoft and electronics manufacturers allows Action Point to offer 360° solutions for customers across new products, services and applications.