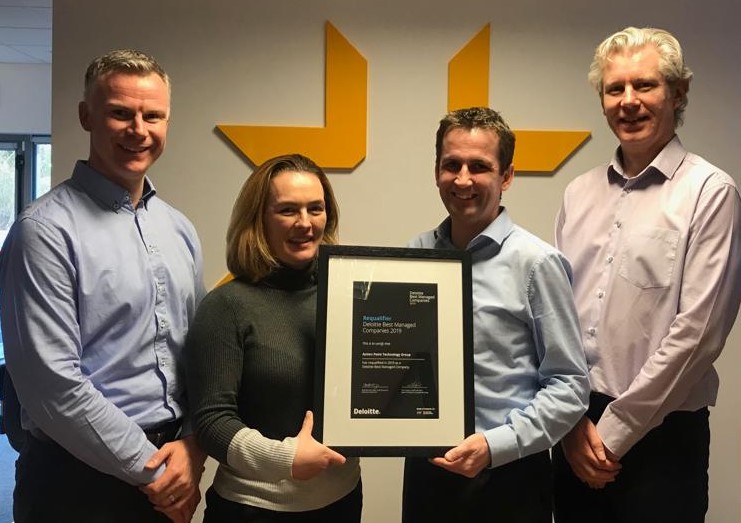 ActionPoint, the award-winning IT Services and software firm, has been named as one of Ireland’s Best Managed companies in the Deloitte Best Managed Company Awards 2019. The company, which demonstrated superior business performance for the 3rd consecutive year, was recognised at a gala awards dinner in Dublin on 1st March 2019.

This year, 12 new companies join a network of 136 companies that were awarded the status of Best Managed. The Best Managed Companies network this year has total revenues of almost €11 billion, export sales of almost €3 billion and total employment of approximately 44,000 people.

Commenting on the award, ActionPoint’s CEO David Jeffreys said, “Achieving this award for the third consecutive year is fantastic recognition for the wider ActionPoint team. The capabilities and dedication of the team, as well as the structures and processes in place within the company, have enabled our UK expansion and allowed us to take on high-profile projects such as our recent announcement with Dubai-based motorsports organisation, The ATCUAE.”

Anya Cummins, Partner, Deloitte said: “Well done to all of the winning companies on their achievement. The Best Managed Companies process is a rigorous one, examining every facet of an organisation, and the bar is set high by our judging panel. As ever, the spread of companies, right around the country and across a number of industries, underlines the importance of Irish and Northern Irish companies to the economy and in the midst of economic uncertainty, technology disruption, an open competitive market and full employment, the continued strong performance of these businesses is admirable. In the current environment, it is important for this contribution to be recognised, supported and showcased.”

Tom Hayes, Chief Executive, Bank of Ireland Corporate Banking said: “It’s a challenging time for businesses in general, with the operating environment consistently and rapidly changing, due to technological developments, new ways of doing things, and challenges on the macroeconomic horizon. The Best Managed Companies this year have demonstrated that they can optimise each area of their business while always operating with an acute awareness of their environment, recognising the opportunities of expansion into global markets, in addition to strategic alliances and partnerships. I look forward to their continued growth.”

ActionPoint was founded in 2005 by David Jeffreys and John Savage and employs over 100 people across Ireland, the UK and the US. It provides custom software development and IT services to clients in many verticals including Manufacturing, Government, Financial Services and now Motor Sports. Its mission is “To help companies achieve their greatest potential using the power of technology.”
ActionPoint joined the Deloitte Technology Fast 50 in 2014 winning further awards consecutively from 2015 to 2018. It also won a Deloitte Best Managed Company in 2017 and 2018. Within the Microsoft community, ActionPoint was awarded Data and AI partner of the Year 2018. ActionPoint was also the first company in Ireland to be recognised as a Dell Certified Partner.

ActionPoint’s key clients include Analog Devices, Johnson and Johnson, VoxPro, Mazars Ireland, Chill Insurance, Kirby Group and Munster Rugby. A recent key project for the ActionPoint team was the eagerly anticipated online renewal system for the Irish Passport Office, a project commissioned by the Department of Foreign Affairs and Trade. The project won a World Class Civil Service award in 2017 and followed that up with Impact in Digital Award at the Customer Experience awards in 2018.

The Best Managed Companies Programme originated in Canada in 1993, where it has been run successfully ever since and is the country’s leading business awards programme. In addition to Ireland and Canada, the programme is also run in The Netherlands, Belgium, Turkey, Mexico, Chile, with upcoming launches taking place in Germany, China, the Nordics and Scotland.

For more stories on ActionPoint and Technology and IT in Limerick, click here.