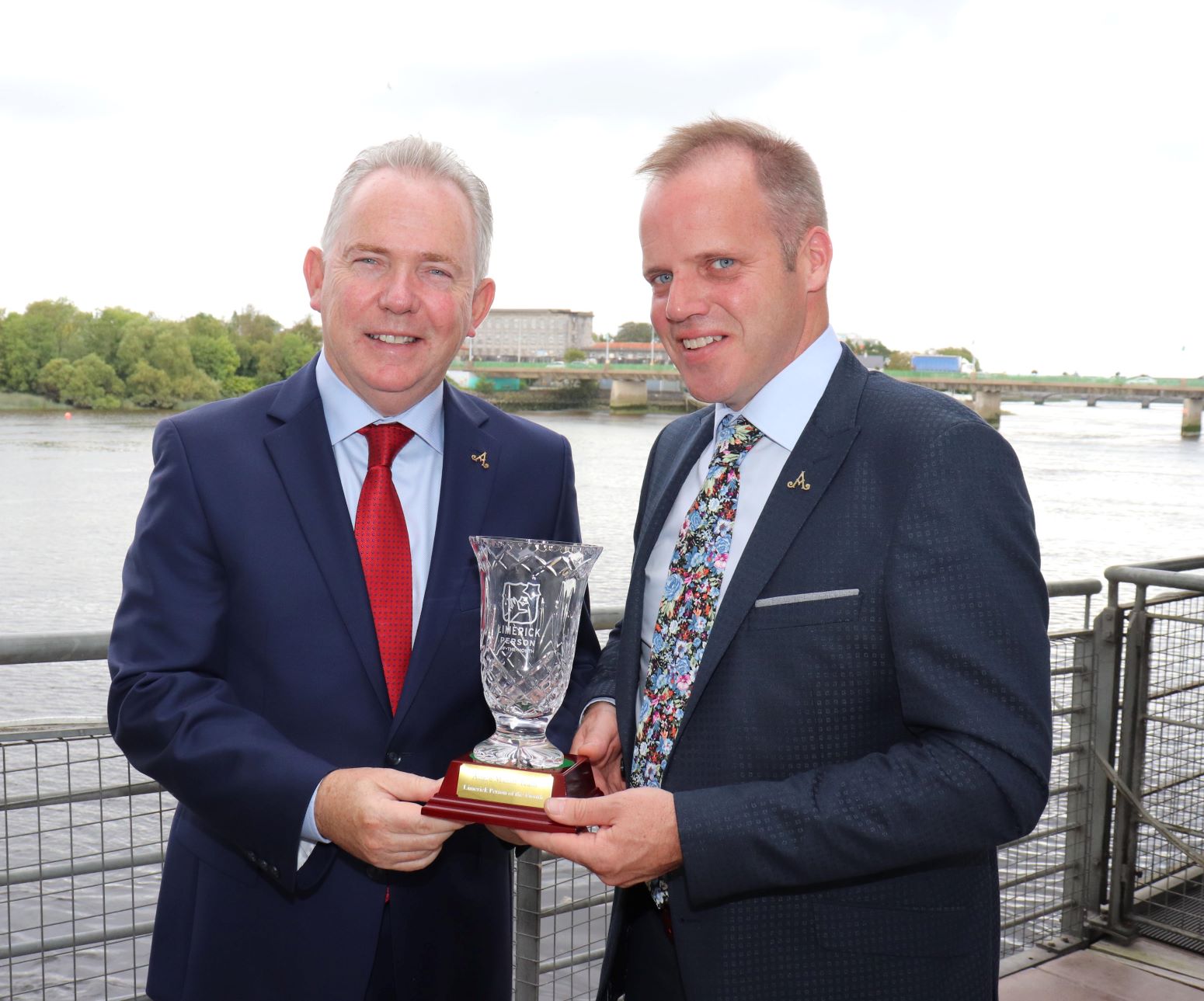 Colm Hannon, CEO of Adare Manor and Alan MacDonnell, Adare Manor Golf Course superintendent accepting the Limerick Person of the Month award on behalf of the team at Adare Manor who secured The Ryder Cup in 2026. Picture: Mike Cowhey

The five-star Hotel Adare Manor, voted ‘Hotel of the Year 2018’ at the world-renowned global Virtuoso ‘Best of the Best Awards’ and recently voted ‘AA Hotel of the Year 2019’, are delighted to announce that the highly successful team who secured golf’s international tournament, the Ryder Cup for 2026 have been named the Limerick Persons of the Month.

Colm Hannon, CEO at Adare Manor, accepted the award along with the resort’s Golf Course Superintendent, Alan MacDonnell, on behalf of the team who secured the return of the Ryder Cup to Ireland for the first time in 20 years.

The Ryder Cup coming to Ireland is great news for the community of Adare, the County of Limerick, the Mid West region and the whole of Ireland.

Accepting the award on behalf of the team, Adare Manor’s CEO, Colm Hannon said “It is a great honour for me to accept the Limerick Persons of the Month Award on behalf of our hugely committed and hard-working team at Adare Manor.  It was a dream of JP, Noreen and the McManus family to bring The Ryder Cup to Limerick and Ireland.  It has been a work in progress for the last couple of years and we are delighted that it has all come to fruition.  It is a great opportunity to showcase Ireland.  We hope the many tourists, golfing and business organisations will work together to identify all the opportunities for the benefit of the Ryder Cup tournaments, the Irish economy and across the southwest community.”

Since the re-opening of the resort in November 2017, following an extensive restoration, refurbishment, and expansion programme, Adare Manor has attracted worldwide attention and collected a number of international awards and accolades.

The securing of the Ryder Cup confirms Adare Manor as one of the leading hotel and golf resorts in the world. The Limerick Person of the Month award is sponsored by the Limerick Leader, media agency Southern and the Clayton Hotel.

For more stories about Limerick Person of the year, go here.

Set on an 840-acre estate, Adare Manor in Co. Limerick is one of Ireland’s leading five-star castle properties. The resort re-opened in November 2017 following an extensive restoration, refurbishment, and expansion programme over a 21 month period. The largest restoration project of its kind in Ireland, the renovation and expansion honours the building’s architectural heritage as a Neo-Gothic masterpiece while incorporating the latest in contemporary luxury. Most notably, the expansion included a new 42-bedroom wing, increasing accommodations to a total of 104 guest rooms, and a ballroom which can host up to 350 guests. The riverside demesne is also home to Ireland and the UK’s 1st and only La Mer Spa, elegant fine dining facilities including the luxury Oak Room restaurant, a championship golf course redesigned by award-winning designer Tom Fazio, trout fishing on the River Maigue and a host of other estate activities, including falconry, archery, and clay pigeon shooting, which will intrigue even the most experienced travellers. Situated in the heart of picturesque Adare Village in Co. Limerick, Adare Manor is surrounded by medieval ruins, walled gardens, and winding woodland paths and just 25 minutes from Shannon International Airport.

The Resort has won a host of world distinguished Awards, including:

May 2019 – Adare Manor has been named as AA Hotel of the Year 2019, the most prestigious prize in the Irish hospitality industry.

August 2018 – Adare Manor has been declared as the Global Winner of ‘Hotel of the Year 2018’ in the highly competitive Virtuoso ‘Best of the Best Awards 2018’.

May 2018 – Adare Manor has been named on the Conde Nast Traveler’s Hot List as one of the best new Hotels in the World.

Ireland’s ‘Hotel of the Year’ 2018 by Georgina Campbell.