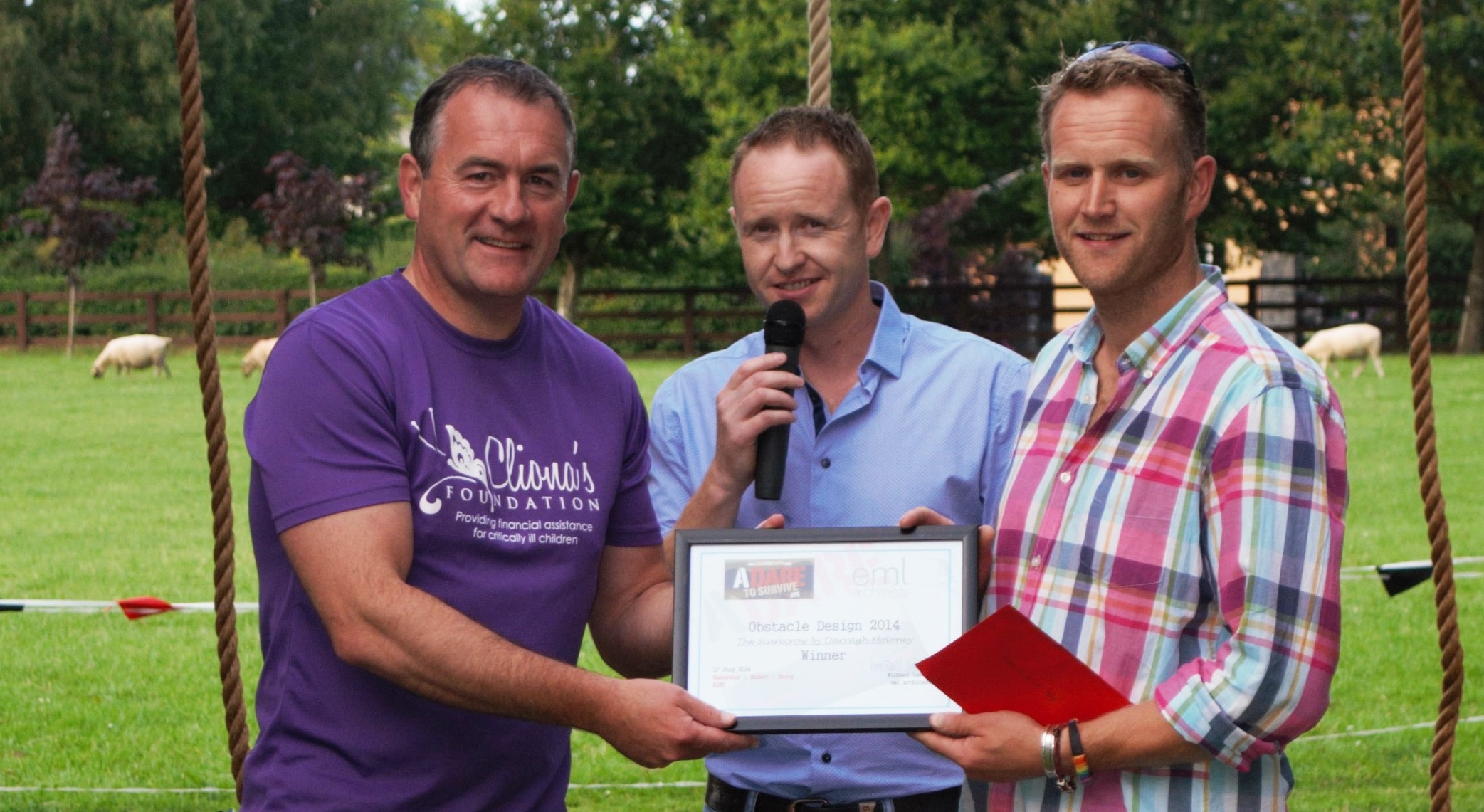 Pictured above: Brendan Ring and Timmy Mulvihill present Darragh Moloney as the winner of the Adare to Survive Design an Obstacle Competition.

An estimated 1,500 people are set to take part in the second annual Adare to Survive challenge on September 28 in Limerick – more than twice the number of participants in the inaugural event. The 7.5km military style obstacle challenge set over 600 heart-rates soaring last year when it was held in the grounds of Clonshire Equestrian centre, taking in 38 natural and man made obstacles. Limerick charity, Cliona’s Foundation, which provides financial assistance to the families of critically ill children, is the official charity partner for the second year running. 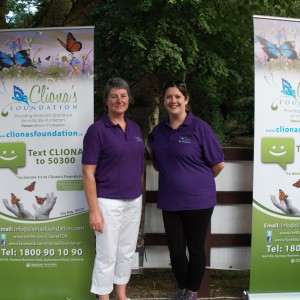 A design called The Scarecrow by Darragh Moloney of West Limerick company, Environmol, has won the Adare to Survive Design an Obstacle Competition. The competition was a collaboration between the #ATS organisers and eml architects and the winning design will be brought to life to form part of the 2014 course that will feature over 30 man made and naturally occurring obstacles on Sunday September 28th in Clonshire Equestrian Centre, Adare.

Having taken part in Adare to Survive last year, the Knockaderry man said he drew inspiration from his personal experience of the adventure challenge and combined it with his knowledge as an Evironmental Engineer to come up with the “Scarecrow.” Athletes must negotiate a muddy pool full of barrels before stepping onto a small ledge to scale a climbing wall that has built in sprayers that will drench them. On climbing the wall they will encounter a bed of chopped straw when they jump down on the other side to ensure that they leave the obstacle looking like a scarecrow. “I’m absolutely thrilled that my design won,” Darragh said adding that he was “very much looking forward to trying it out in person” in September with his team mates.

The Scarecrow design narrowly beat the Edge by Liam Kenny, Co Clare and the Gauntlet by David Randles, Dooradoyle. 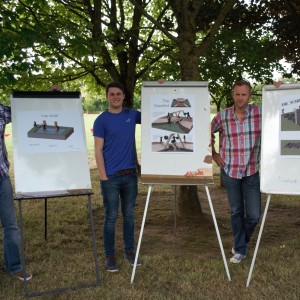 A look at the shortlisted designs and their creators (from left to right): Liam Kenny, David Randles & Darragh Moloney (winner)

“It is amazing, the talents people can display when the opportunity arises to challenge and humiliate their fellow competitors! It’s been an eye opener for us and we are confident “The Scarecrow” will be a talking point on the day,” Mr Landers said.

Having presented prizes to the winner and runners up, Brendan Ring of Cliona’s Foundation said, “I am so excited that Cliona’s Foundation is the chosen charity for Adare To Survive for the second year running. It means so much to the charity to be involved in such a wonderful event and to receive such great support from the community. I am going to be taking part in the event myself again this year and I am really looking forward to the challenge and a wonderful day out.”

Over 1500 participants are expected to converge on Clonshire Equestrian Centre to take part in Adare to Survive or cheer participants along. If you would like to undertake the military style challenge, early registration is advisable on the event website www.adaretosurvive.com