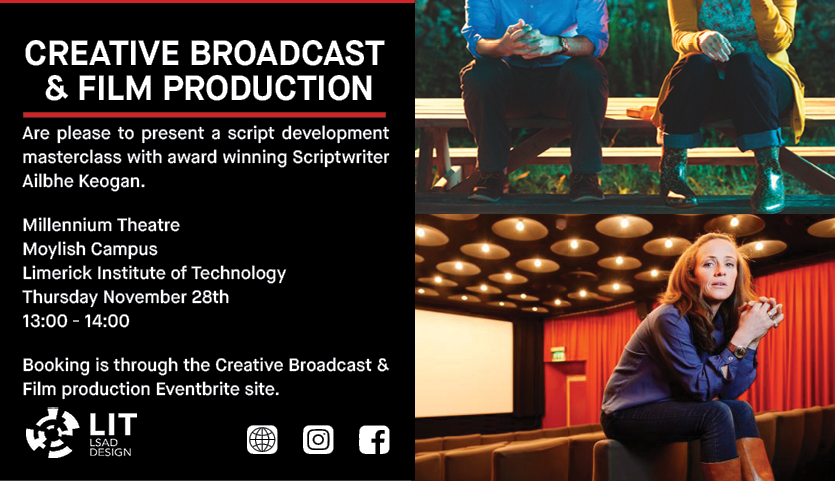 A free Script Development Masterclass with Ailbhe Keogan will take place on Thursday, November 28 at Millennium Theatre from 1 pm to 2 pm.

Ailbhe started her writing career with her novel Molly & the Cyclops, published by Hag’s Head Press, in 2006. From there, she moved into screenwriting. Her first feature film, Run & Jump was selected as part of the Berlin Talent Campus Script Station and the Sundance Institute’s lab. Directed by Oscar-nominated Steph Green, it premiered at Tribeca in 2012 and the script went on to win numerous awards including a 2014 IFTA nomination and a Zebbie for best screenplay 2014.

Her second feature film, Joy & Mully, went into production in 2018, a co-production between Zentropa Films (Denmark) and Subotica (Ireland) She is currently working on Sidelined, a feature film for Parallel Films and the Irish Film Board. Ailbhe was selected for Guiding Lights 8, the UK film industry’s leading mentoring programme. She was under the mentorship of Alex Garland.

Ailbhe’s short film script, Take Me Swimming, was one of four films to be funded by the Irish Film Board Focus Shorts scheme in 2016 and premiered at the Cork Film Festival 2017. It stars Barry Ward, Olwin Fouere and B.J. Hogg. Ailbhe is on the board of the Kerry Film Festival and has worked with the Youth Justice programme for many years in conjunction with KDYS.

Book your place through Eventbrite here

For more in Ailbhe go here