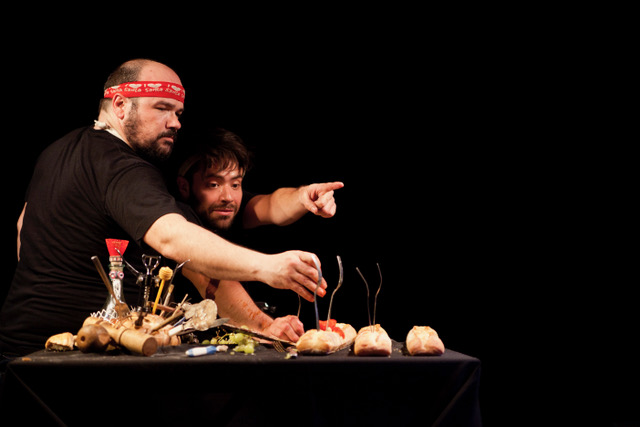 After over 800 performances around the world, in more than 15 countries, this acclaimed adaptation of Alfred Jarry’s Ubu Roi comes to Limerick.

All bets are off as the fate of Poland is sealed on a tabletop. Two armies of French baguettes face each other in a stand-off as tomato bombs explode, an egg beater hovers over fleeing troops and molasses-blood splatters on fork-soldiers.

The objects’ raw form and the performance’s frenetic pace are perfectly suited to Alfred Jarry’s cruel farce.  Together with the Bottle as Père Ubu, the Mini-Mop as his wife Mère Ubu, the Big Teapot as King Wenceslas, the Hammer as Captain Bordure and many other bizarre kitchen utensils that double as gorging tools and weapons to annihilate the “sagouins”, two talented actor-puppeteers hammer out a small-scale fresco of grandiose buffoonery.

Ubu on the Table was translated into English by Bobby Theodore and created by Olivier Ducas and Francis Monty.  It is performed by Étienne Blanchette and Mathieu Gosselin with lighting by Jonas Bouchard.

Since its creation, the critically acclaimed and multi-award winning show Ubu on the Table has taken to the stage in cities and festivals in more than 15 countries, including France, Spain, Belgium, Finland, Romania, Bulgaria, Mexico, Brazil, Turkey, and Russia.

Founded in 1999 in Montréal by Francis Monty and Olivier Ducas, La Pire Espèce is a pioneer in object theatre in Québec and one of its puppetry scene’s leading figures. Impertinent, festive and witty, the company’s approach to theatre combines raw materials with unbridled imagination, baroque plenitude with surgical precision. La Pire Espèce’s repertoire is now made up of 19 original productions that have been performed around the world.

“An iconoclastic version of an already irreverent and unbridled work, the performance is great fun and yet quite learned: theatre specialists and connoisseurs will delight in the many subtle references, twists and delicious technical feats.” — Le Quotidien on Alfred Jarry’s Ubu Roi

To book tickets for Ubu on the Table click here

To read more about entertainment in Limerick click here