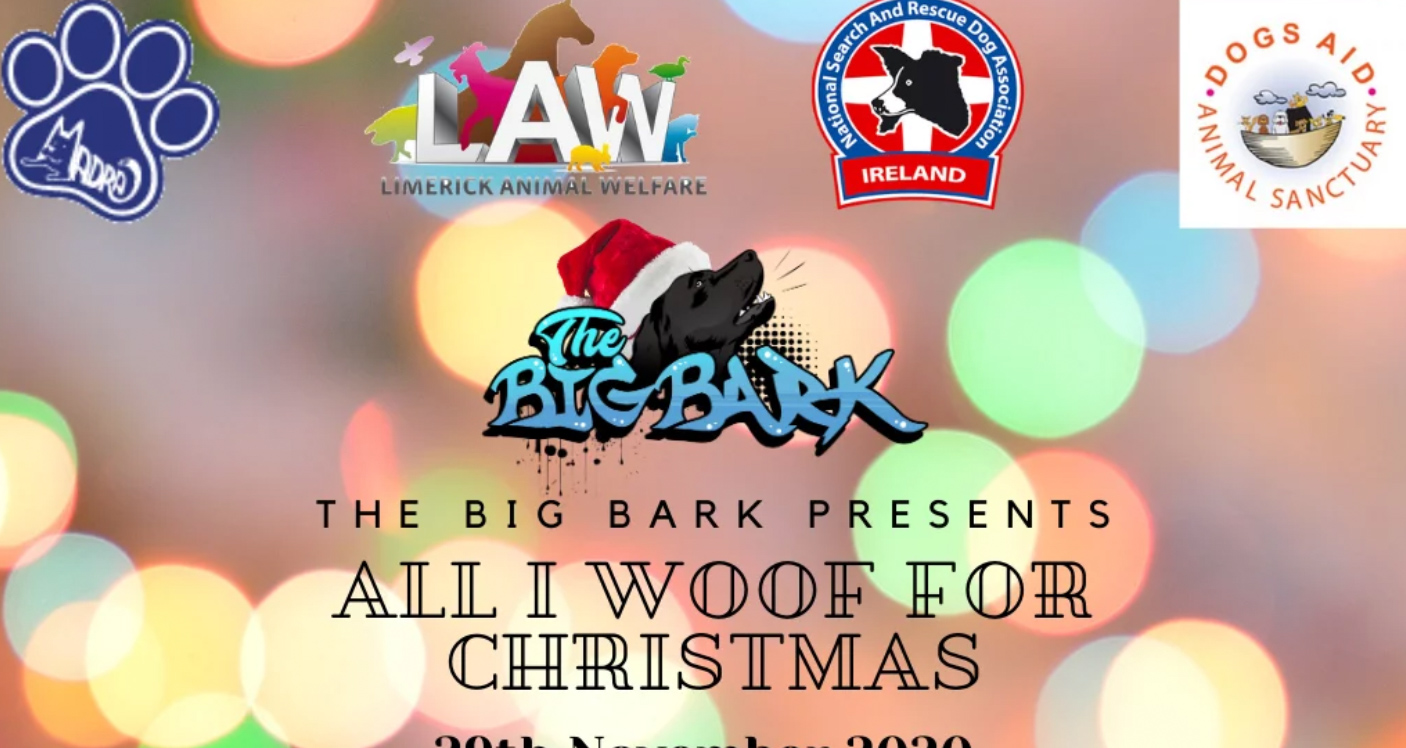 All I Woof for Christmas raises funds for animal charities

All I Woof for Christmas raises funds for animal charities

Limerick’s own, The Big Bark K9 podcast host Darragh Bourke is a loving dog owner with a passion for canine psychology and behavior.  He has recently announced their festive line up of events that will kick off on November 29 with a series of virtual events and live shows.

On November 29, the festival kicks off at 4.30 pm with All I Woof for Christmas, this will be a virtual showcase of Irish Pet Businesses, to encourage the purchase of Irish goods and shopping local this Christmas. The show will feature product demonstrations, raffles, giveaways, and Live entertainment from Irish musicians. All funds raised from the raffle will be distributed among the above charities.

On December 6, The Big Bark will host a live Q&A session with Dr. Tim Kirby of petbond.ie discussing why a dog is for life and not just for Christmas, why you should adopt and not shop at Christmas while offering some great tips for pet owners.

This will then be followed by Virtual visits with Santa Paws on the weekend of December 12 and December 13. Pet owners will be offered the opportunity to meet with Santa Paws virtually, will have the chance to submit their letters to Santa in advance on behalf of their pets, and will also receive a personalised letter from Santa Paws. Pet owners will also have the opportunity to purchase just a personalised letter from Santa Paws without the visit. All funds will once again be distributed among the above charities.

Finally, on December 20, the festive series of The Big Bark wraps up with an evening of festive charts with some of the favourite guests of the show, live entertainment from more of Ireland’s talented musicians. The total funds raised for the four charities will also be revealed during this show.

The Big Bark is a dog podcast series that focuses on bringing you the best content from the canine world. Each episode is streamed live from Limerick, a city in the Midwest of Ireland. Each week they have a different guest co-host who joins the host Darragh Bourke to chat about what is happening in the canine world.

Currently, averaging at number 10 in its category on the Podcasts charts. The Big Bark has quickly grown to become a fan favourite. They have a growing fan base not just in Ireland but on a global scale with dog owners watching their live streams from as far away as Texas and New Zealand.

Announcing the series, owner Darragh Bourke, explained why he chose to undertake this project saying, “For me, Christmas has always been a special time of year and my dogs are a huge part of that for me. Owning a dog really does bring the magic of Christmas to life. I love nothing more than waking up on Christmas morning, and giving my dogs all of the presents wrapped under the tree with their names on it and I know that there are many pet owners out there that do the same, they spoil their pets at Christmas. But there are a lot of dogs and cats as well as other animals who do not get to experience this joy on Christmas morning. I wanted to do something to give back to those who need the support and withThe Big Bark canine podcast going so well and consistently growing, I knew that I could utilise that to bring an event to the followers of the show that would help raise these much-needed funds.”

For more about The Big Bark Canine podcast, go HERE

Related Topics:Big Bark
Up Next