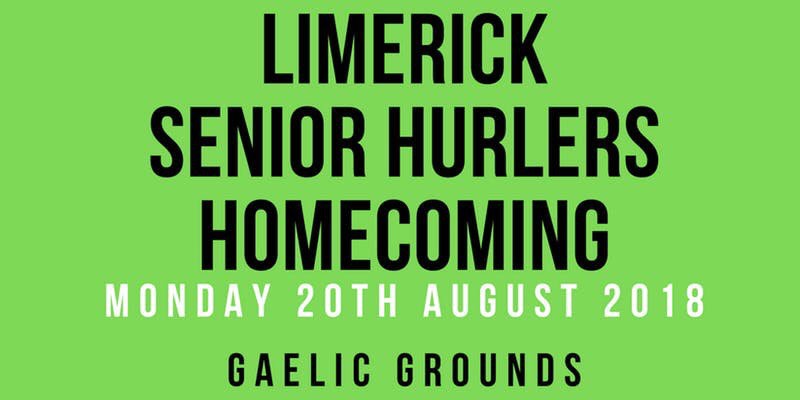 All Ireland Senior Hurling champions homecoming is at the Gaelic Grounds on Monday, August 20.

The Gaelic Grounds will host the homecoming for the All-Ireland Senior Hurling Champions tomorrow (Monday 20 August 2018).

Well done to #Limerick. So sweet a victory after so many years. Great day for hurling. Glad #Galway not going home empty handed. #AllIreland

A massive party, All Ireland Senior Hurling champions homecoming is planned at the home of Limerick GAA as supporters will get a chance to welcome home their heroes – the first Limerick team to bring the Liam McCarthy Cup to the Treaty County in 45 years.

Limerick City and County Council in association with Limerick GAA are inviting supporters to come and join the free family-friendly party at the homecoming in an expected capacity crowd in the Gaelic Grounds.

All Ireland Senior Hurling champions homecoming is a ticket-only event with free tickets available from Eventbrite.ie from 6 pm Sunday, August 19.

Please be patient as you log on to get your tickets, which are available on a first come first served basis.

They are all free with no charges and can be downloaded onto people’s phones.

In the interests of fairness and allowing as many supporters as possible to get tickets, they will be limited to six tickets per transaction

You will need a ticket to enter the Gaelic Grounds for the All Ireland Senior Hurling champions homecoming, so please don’t come to the grounds if you don’t have a ticket.

Limerick City and County Council and Limerick GAA are encouraging supporters to get to the stadium as early as possible to soak up the atmosphere.

Gates will open at 4 pm with entertainment beginning shortly afterward.  It is extremely important that you get there early to soak up the atmosphere.  Once the stadium is at full capacity, no others will be admitted.

Gaelic Grounds to host All Ireland Senior Hurling champions homecoming. Award-winning Irish group Beoga, fronted by Limerick woman Niamh Dunne, will get the party started before The Blizzards continue the entertainment, while DJ Mark McCabe will have no problems keeping the spirits high as Limerick celebrates its first All-Ireland Senior Hurling title in 45 years.

In the interests of health and safety, the last admittance to the Gaelic Grounds for supporters will be 6.30pm.

Liam McCarthy is due to make his first appearance in the Gaelic Grounds around 7 pm as the victorious team is welcomed onto the stage to have a chat with RTE’s Marty Morrissey.

The party is due to finish around 9 pm.

Images from a momentous day for Limerick as it celebrates being All-Ireland hurling champions after 45 years pic.twitter.com/L42U2v85wk

There will be widespread traffic restrictions around the Gaelic Grounds.  Supporters planning on going to the homecoming are urged to use public transport or park in the city centre and walk the short distance to the Gaelic Grounds. (See road closure details below).  There is no parking available on the grounds.

Bus Éireann is to provide additional frequency on the city’s route network to cater for the expected crowd.

The train carrying the victorious team will arrive into Colbert Station at 5.40pm where the team will be greeted by the Mayor of the City and County of Limerick Cllr James Collins.

The team will be brought out to the steps of the station before travelling on an open-top bus to the Gaelic Grounds for the official homecoming.

The bus will travel down Mallow Street, O’Connell Street, Sarsfield Street, over Sarsfield Bridge and out the Ennis Road to the Gaelic Grounds.

This will give supporters not going to the Gaelic Grounds a chance to greet their heroes.

There will be rolling road closures in the city centre from 5.30pm until 7.30pm as the team makes its way to the home of Limerick GAA.

After an incredibly tense 2nd half Limerick Senior Hurlers are the All-Ireland CHAMPIONS for the first time in 45 years!!! #LuimneachAbú Well done to Galway on a great summer of hurling, but to the Limerick team and particularly our UL students and graduates we are VERY PROUD. ? pic.twitter.com/LAE6Xn9hal

Congratulating the team on their famous victory, Mayor of the City and County of Limerick Cllr James Collins said: “This is incredible, unbelievable!  The team performed with such determination and skill in the final.  They showed their true colours and the pride they have in the green of Limerick.  On behalf of the people of Limerick, I would like to thank them for this amazing All-Ireland journey.  It is not just the win that fills us with pride, it is the manner in which the team and management have carried themselves throughout the campaign. It was such a nailbiting finish but your belief in your abilities and never say die attitude shone through.”

John Cregan, Cathaoirleach of the Limerick County Board added: “We set out together last January to embark on a journey to success. This has now been achieved in a truly remarkable fashion. We have now just won what many believe to be the greatest All Ireland championship of all times. This year was different, this championship was different and this Limerick Team is now very different. This so-called championship that kept on giving has now given us the greatest prize in hurling, Liam McCarthy, after a 45-year absence.”

“In what is my greatest ever privilege, on behalf of Limerick County Board, I salute all involved in this famous victory, our team captain Declan Hannon and his 35 colleagues, manager John Kiely and his management and backroom teams, our team sponsor Adare Manor and JP and Noreen Mc Manus, our additional sponsors, my fellow officers and staff of Limerick County Board, and of course our clubs and many thousands of supporters both at home and scattered throughout the world all of whom have contributed to this success.”

“Many thanks to our Homecoming hosts Limerick City and County Council, to An Garda Síochána and to all of our other civic authorities for your massive input into this event and indeed for your ongoing support for and cooperation with Limerick GAA. Ar son Coiste Luimnigh go raibh míle maith agaibh go léir agus míle míle buíochas do gach éinne.”

Motorists are also advised that Limerick city centre will be subject to significant traffic diversions, with rolling closures from 5.30pm until 7.30pm due to the homecoming of the victorious Limerick Hurling team.  Traffic delays are expected.