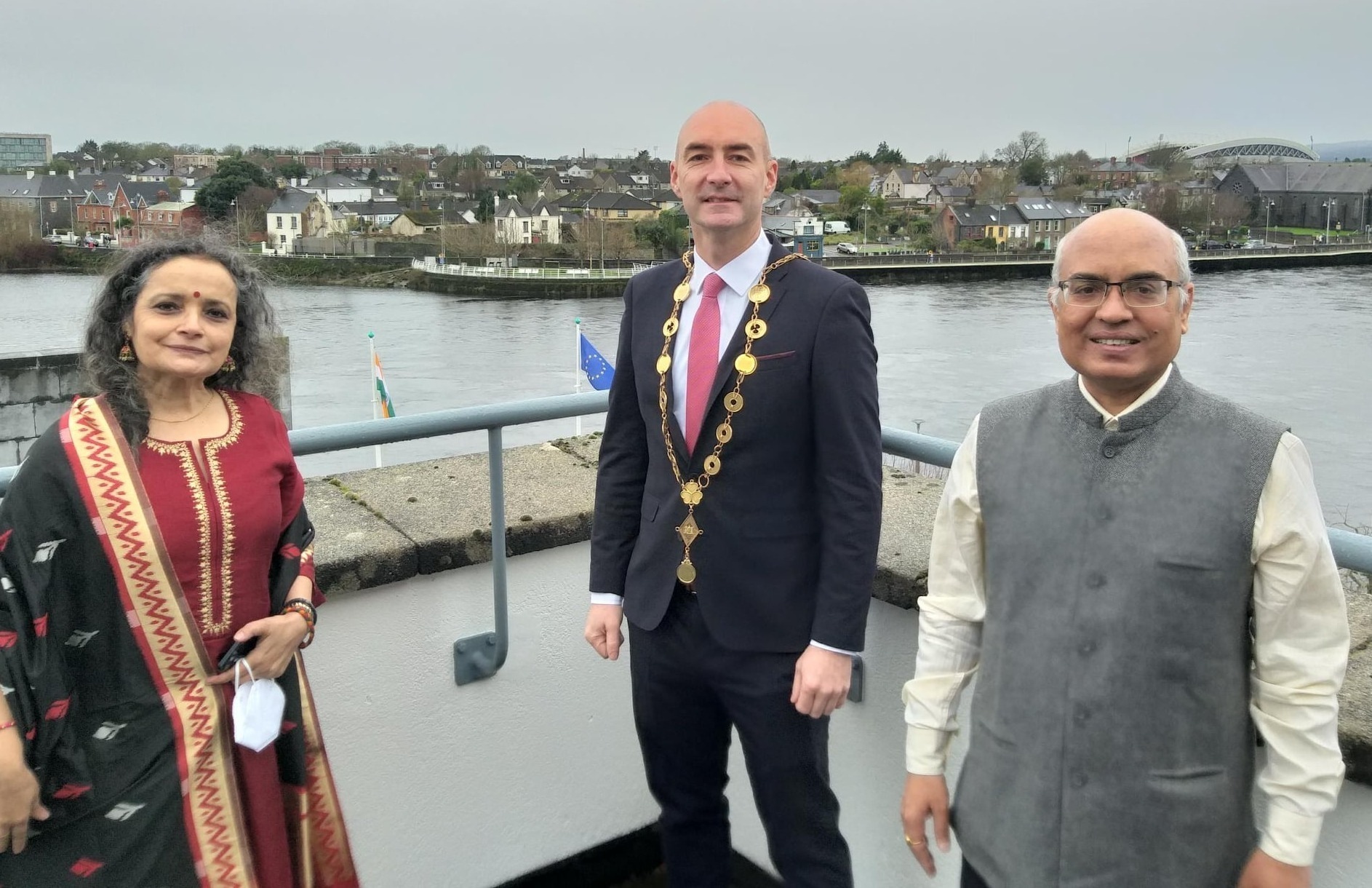 Ambassador of India to Ireland, Akhilesh Mishra and his wife Reeti pictured above with Mayor of Limerick City and County, Daniel Butler.

The two representatives discussed ties between India and Ireland, as well as the Indian connection to Limerick.

The Ambassador of India to Ireland, Akhilesh Mishra, has met with Mayor of Limerick City and County, Daniel Butler. The diplomat visited Limerick on Monday, January 10, to discuss ties between India and Ireland, as well as the Indian connection to Limerick.

Ambassador Mishra and his wife Reeti spent time at the Limerick City and County Council offices, where they spoke about Ireland’s well-established Indian community with Mayor Butler.

“I was delighted to welcome the Indian Ambassador to Ireland, Akhilesh Mishra to Limerick to discuss increased links between our two countries economically, educationally, culturally and socially,” said Mayor Butler.

“We have over 3000 neighbours and friends living in Limerick from India, who form a valuable and enriching part of our community.”

Ambassador Mishra, who arrived in Ireland to take up the role in October 2021, has worked as an Indian diplomat for over three decades. He is dedicated to promoting India’s economic, technological and innovative strengths, as well as improving the nation’s relationship with other countries.

The ambassador said of his Limerick visit, “I had the great privilege to meet the honourable Daniel Butler, the charismatic Mayor of Limerick.

“I am grateful for his hospitality & generous support for strengthening cooperative linkages between Limerick and India in business, culture & education.”

Mayor @DanielButlerfg welcomed Ambassador of India to Ireland, Akhilesh Mishra, & his wife to Limerick today. They discussed the importance of relationships between Limerick & India in light of Brexit & the 3,000+ Indian Diaspora community living, working & studying in Limerick pic.twitter.com/YSIHs4Ct5t

Furthering his work in Limerick, Ambassador Mishra attended a virtual conference with the University of Limerick, meeting senior representatives of the institute. He discussed new ideas for collaboration between the university and India in 2022, as UL celebrates its 50th birthday and India celebrates 75 years of independence.

It is estimated that there are over 40,000 members of Ireland’s Indian community. Each year, scores of people within the community become Irish citizens. There are Indian groups and associations in most Irish counties, including the Indian Cultural Association of Limerick here in the Treaty City.

For more information on the Irish Embassy of India, go HERE