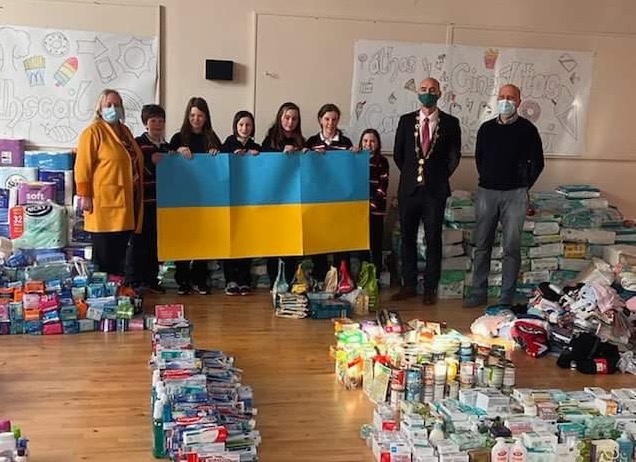 An Mhodhscoil Ukraine donation – An Mhodhscoil has shown its support to the Ukrainian people through generous donations of important items from the school’s children, parents, and teachers. Mayor Daniel Butler pictured above visiting the school.

Necessities such as blankets, bars of soap, thermal foil blankets and baby formula were all included.

An Mhodhscoil is a non-denominational, co-educational, all-Irish language school which nurtures a positive and co-operative educational environment located on O’Connell Avenue right in the heart of Limerick city.

An Mhodhscoil has shown its support to the Ukrainian people through generous donations of important items from the school’s children, parents, and teachers.

The An Mhodhscoil Ukraine donation is a strong declaration of solidarity from the school after the unjust military invasion the Russian Government placed upon Ukraine just two weeks ago.

An Mhodhscoil Parents’ Council made a post on Facebook urging members of the community to take part in the An Mhodhscoil Ukraine donation drive as the people of the Ukraine need all the support they can get in these unprecedented times.

Necessities such as blankets, bars of soap, thermal foil blankets and baby formula were all included in the list of items accepted in An Mhodhscoil Ukraine donation appeal.

A touching letter written by 8-year-old Iris, a student at An Mhodscoil was among the items sent to the Ukraine people. It read, “Dear Ukraine, my name is Iris. I’m really sorry about the war. I’m not from Russia, I’m from Limerick,” she wrote. “The money I gave you was all of mine.”

An 8 year old child from Ireland ?? supports #Ukraine. With real action. An example for to follow #StandWithUkraine pic.twitter.com/kq3AW52VXE

Members of the parents’ council contacted a transport company called Greenspeed who will send the goods free of charge to Poland where the supplies will be distributed to refugee centres based around the border.

Dublin WOŚP, an Irish branch of the Polish non-governmental, non-profit charity organisation based in Poland was at the loading site yesterday to fill the lorries.

“A wonderful and very touching day is behind us – a day full of tears,” a spokesperson for Dublin WOŚP posted on Facebook.

The donations amassed a huge two lorries full, one carrying 45 pallets full of items for children, women, and medical supplies that will be repacked in Kraków and transported directly to Ukraine and another carrying 11 pallets of food that is heading directly to Ukraine.

Irish people are being asked to continue to support Ukraine in all the ways that they can, even small donations of essential items and money can go a long way.

An Mhodhscoil would like to thank the Modhscoil community: children, parents and teachers, for gathering an array of important items for the people of Ukraine and would also like to thank Mayor Daniel Butler for lending his support.

For more on An Mhodhscoil, go HERE

Today we were shipping off two trucks Dmytro and Eugene. Dmytro is going to Cracow carrying 45 pallets of goods, which will be then sent to #Ukraine, while Eugene will go directly to Ukraine carrying food. Our friends from Freightspeed Group organised a big send off (1/2) pic.twitter.com/TUEWAyHP1v

Doras Working Around The Clock as Ukrainian Refugees Arrive in Limerick