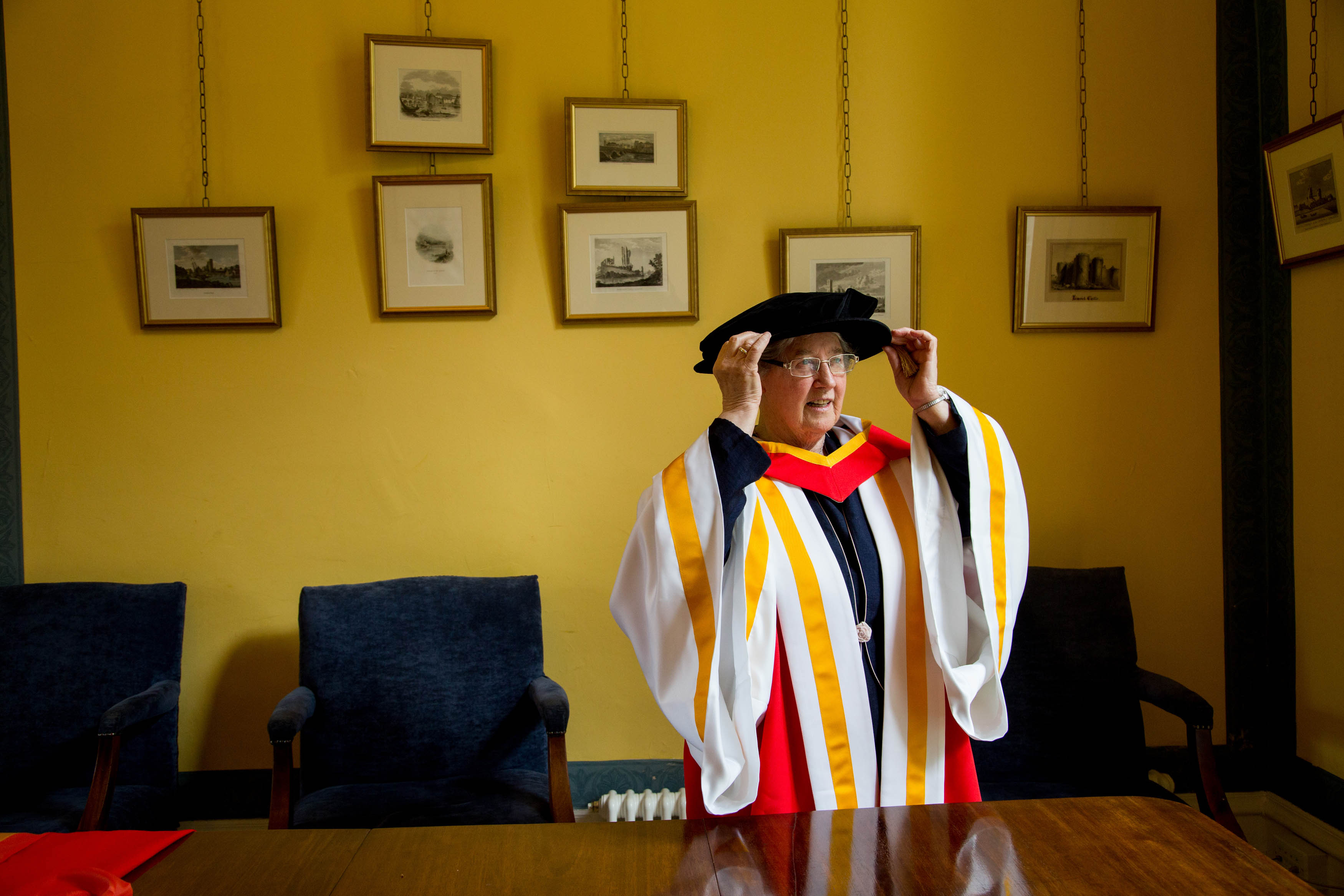 Pictured is Sr. Angela Bugler, former President of Mary Immaculate College Limerick who was conferred with the honorary degree of Doctor of Letters. Picture: Alan Place.

This week saw the University of Limerick pay tribute to a woman who played a vital role in securing the future for Mary Immaculate College. Sr Angela Bugler, former President of Mary Immaculate College, was awarded an Honorary Doctorate Award from the University of Limerick in recognition of her leadership of MIC during her term as President from 1988 – 1999.

Speaking at the ceremony the Hon Mr Justice John Murrary, Chancellor of UL and Chair of UL’s Governing Body spoke of the pivotal role Sr Bugler played in leading MIC through a decade of unchartered waters, resulting in her achieving something exceptionally not only in her own life but also in the life of the University.  Sr Bugler’s strong leadership, resourcefulness, ambition and diplomatic skills proved crucial in the delivery of Mary Immaculate College from a difficult situation and were instrumental in securing a future for the College he said.

Born in Mountshannon, Co. Clare, Sr Bugler began her career in education as a national teacher in the 1950s. A proud graduate of Mary Immaculate College, she taught for five years before entering religious life at the Convent of Mercy in Westbourne, Limerick. She obtained her BA in Irish and French, Higher Diploma in Education and Graduate Diploma in Librarianship from UCD. Her MA in Education was conferred by NUI, Maynooth.

Appointed to MIC in 1966, Sr Angela Bugler lectured in Irish language and French as well as managing the library, being the college’s first professional librarian. In 1984, she was appointed Rúnaí Acadiúil, serving as academic secretary to the president of MIC from 1984 until her own term of presidency began in 1988.

Due to a sharp decline in birth, resulting in a huge drop in demand for primary teachers at this time, MIC faced a critical challenge for survival.  However, not one to be daunted, Sr Angela Bugler faced the challenge and embarked on an ambitious diversification programme. Plans included proposals for introducing a Bachelor of Arts degree, postgraduate degrees in education and the arts, curriculum development, second-chance education and research. A broad internationalisation programme was initiated by establishing networks with colleges in Europe through the EU and Council of Europe. Links were also forged with universities in the United States and Wales.

Following the inauguration of the University of Limerick in 1989, the secretary of the Department of Education instructed MIC to open discussions with UL with a view to establishing a more formal relationship between the two institutions. To that end, negotiators from both institutions entered into talks which led to the formation of a mutually beneficial partnership. On November 1st, 1991, the Minister for Education announced that thenceforth degrees in MIC would be conferred by UL. The benefits of such an arrangement were immediately obvious. MIC could now implement its plans for admitting liberal arts students, and in 1992, 150 students registered for a registered for a new Liberal Arts degree at MIC, making MIC the first institution of its kind to be a College of Education and the Liberal Arts.  Over the course of the next 25 years, 3,500 MIC students have been conferred with Liberal Arts degrees.

According to Chancellor Murray, “Sr Angela played a pivotal role in initiating and progressing the process. This is her legacy, and it is still significant today”.

Furthermore, the link with UL afforded MIC the opportunity to raise the scale of its ambition by offering postgraduate degree programmes for the first time. Consequently, mid-way through her presidency, Sr Angela oversaw the delivery of the first taught master’s programme in education. Since then, the breadth and trajectory of postgraduate study at MIC have accelerated – the first PhD scholar was conferred in 2003 and the 100th in 2015.

Congratulating Sr Bugler Professor Eugene Wall, Acting President of MIC “We remain indebted to Sr Angela Bugler not only for her enormous contribution to Mary Immaculate College but also for the vital role she played in the development of education provision in Limerick. While Sr. Angela Bugler’s achievements as President of MIC can be readily appreciated from an intra-mural perspective, it is the partnership with the University that is recognised today as an exemplar of institutional collaboration that was given its foundations and underpinnings during her tenure. As President, and as a person with the vision and commitment to foresee the dividends of the MIC-UL relationship Sr Angela laid the bedrock essential to its future development”.

He continued to say that fittingly, in the year of the 25th anniversary of the first Memorandum of Understanding between the two institutions, a UL-MIC Joint BA degree has been launched. Delivered across both campuses, the programme will commence in September 2017 and will boast the broadest range of humanities subjects ever offered to students at either institution.  “In a tangible sense, this new moment in the MIC-UL partnership will derive from Sr Angela’s vision and legacy as President of MIC from 1998-1999.  Today we thank you.”