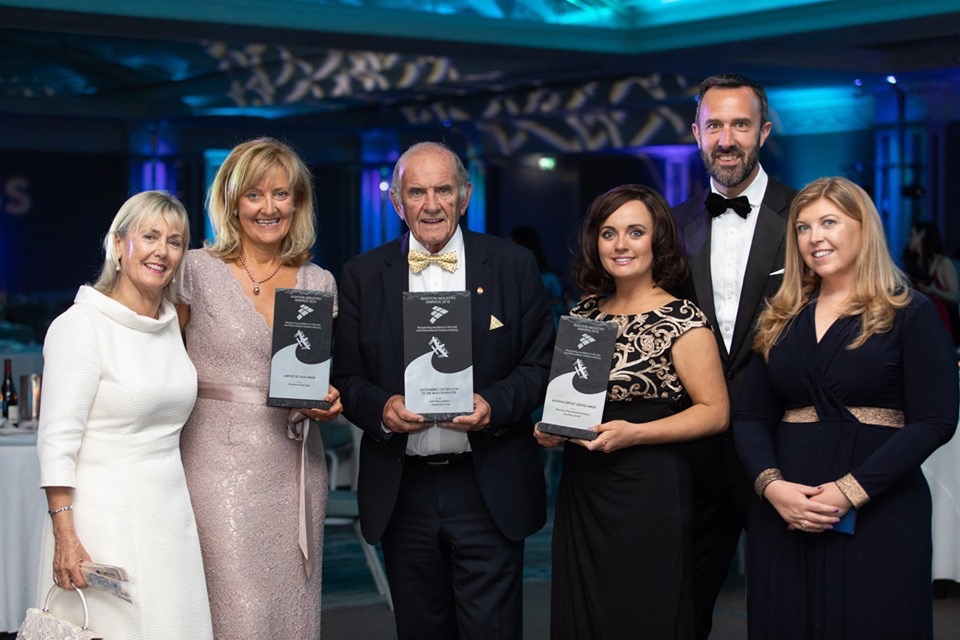 Shannon Group and Shannon based companies have soared again in the eyes of industry experts after claiming several awards at the Annual Aviation Awards 2019 at the weekend.

Held at the Clayton Hotel on Friday night, the awards are the benchmark for excellence for those demonstrating best practice and innovation in the aviation sector in Ireland. The awards reflected again Shannon’s huge influence in Irish and international aviation, with two Shannon Group companies picking up awards and six other awards also deeply connected with Shannon.

One of the Shannon Group awards went to the International Aviation Services Centre (IASC) – the largest aviation cluster in Ireland, with over 60 companies based in the Shannon Free Zone – for the Aviation Support Services.

Another link with Shannon was the Aviation Leasing Achievement Award, which went to Avolon, the leasing company founded by Clare man Dómhnal Slattery, its CEO and industry leader who started his career with Guinness Peat Aviation in Shannon.

Dómhnal Slattery said, “These awards remind us yet again of the incredible role Shannon has had on aviation, not just in Ireland but globally.”

“Not alone did Shannon Group entities, Shannon Duty-Free and IASC, win awards, but to have eight awards in total connected with what has been built up here over the years is a testament to the quality and calibre of the aviation companies based in Shannon. I would like to pay tribute to our staff who have worked hard to achieve this recognition and congratulate Colm Mc Loughlin on his outstanding contribution to the industry.  Last week we celebrated the 80th anniversary of the first commercial flight into Shannon and Friday night’s awards illustrated the remarkable aviation heritage we have, a heritage we continue to honour today and into the future,” he added.

The second was picked up by Shannon Duty-Free as it was announced Airport Retailer award, validation for the significant investment in the historic outlet, which was the birthplace of airport duty-free shopping globally, in 2018.

The Outstanding Contribution to the Aviation Industry award also reaffirmed Shannon’s global influence, with the recipient Colm McLoughlin, CEO of Dubai Duty-Free, a former Assistant Manager at the Shannon Duty-Free Outlet.  Now leading one of the world’s largest duty-free companies, Mr. McLoughlin was a member of a Shannon Duty-Free team that was invited to Dubai by the city’s rulers to help establish the now iconic Dubai Duty-Free brand.

The MRO Achievement Award went to Aero Aviation in Shannon, while the Upcoming Aviation Professional Award went to Owen Bagnall, Director of Operations at Aero Inspection.