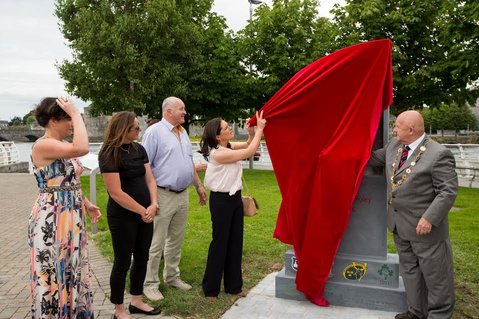 Limerick City and County Council has enshrined the powerful image of Shannon, Munster and Ireland’s favourite No. 8 in a riverside memorial to the late, great Anthony Foley.

In the local authority’s official dedication to the iconic rugby star, who died suddenly last October in Paris, it has erected a 2m tall memorial stone with an iconic image engraved of the legendary forward charging, ball in hand on Clancy Strand.

The Anthony Foley Shannonside Memorial was the initiative of Mayor of Limerick Kieran O’Hanlon and was unveiled in a low-key event attended by the late player’s wife Olive, father Brendan and sisters Rosie and Orla.

A number of the Foley’s closest friends were also in attendance, among them Keith Wood and Marcus Horan.

Unveiling the memorial, Mayor O’Hanlon said: “This is a fanatical rugby city and county, with many heroes but they did not come bigger or prouder than Anthony Foley.”

“Every rugby fan had their own special relationship with Anthony because he was that modest everyday type of guy who just happened to be one of our greatest and most celebrated rugby stars.”

The Mayor of Limerick Kieran O’Hanlon unveils the plaque with Olive Foley pictured at the unveiling. Picture Sean Curtin/True Media

He continued: “Given the city’s relationship with him and the sense of loss that people will have for a long time to come, a loss that pales in comparison to what his family is going through, we wanted to come up with something that the public could connect with and relate to and the memorial stone has done that for us.”

Anthony Foley’s sister Rosie said: “It’s a beautiful location and an outstanding tribute to him. It’s a sculpture in limestone from Clare, erected here in Limerick, close to Thomond Park and by the very river that we grew up beside out in Killaloe.”

“Anthony wouldn’t have liked the fuss or anything like that but at the same time, we are delighted as a family to have him honoured in this way.”

“We have been overwhelmed by all the kindnesses, including this. The outpouring is amazing, not just from the rugby community but the wider sporting community, supporters, people that we will never actually get to thank. But we really do appreciate all the help and support they have given us through a tough time”, she said.