Anti Sexual Harassment Mural in the University of Limerick, which supports the “It Stops Now” campaign.

UL Student Life and the University of Limerick installed the Anti Sexual Harassment Mural prominently on the side of the student bar, The Stables, at a busy thoroughfare of students, staff, and visitors, to create a strong visual impact commanding the attention of passers-by. 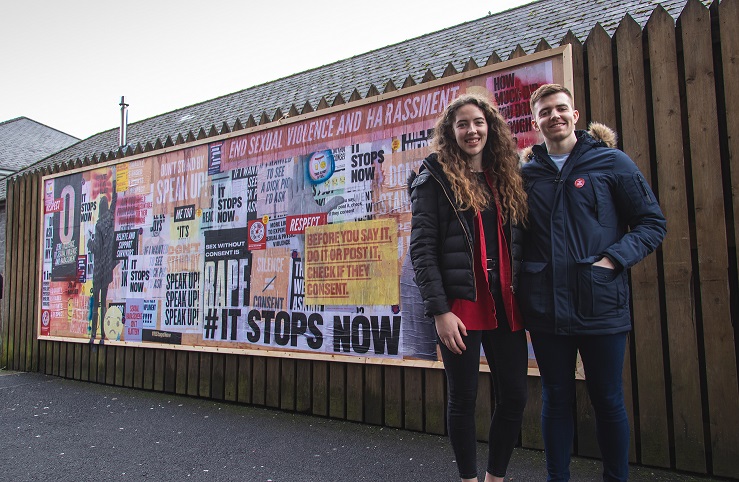 Lorcan O’Donnell, Welfare Officer of UL Student Life, said, “A report by Union of Students Ireland (USI) in 2013 found that 1 in 7 people will experience some form of unwanted sexual contact during their time in college. It is essential that we take collective action to ensure the safety, equality and full participation of 15,000 UL students, the university academic and support staff, and all those who visit the campus. The ‘It Stops Now’ campaign mural is a central tool in sharing key messages and encouraging cultural change in attitudes towards and behaviours of sexual violence and harassment. By installing this mural, UL is making an important contribution to tackling sexual violence and harassment on campus. Our hope is that the mural will challenge harmful language and preconceptions around sexual harassment and assaults, sending a strong message to all who use our campus that we are addressing the universal, societal problem of sexual misconduct”.

He added, “UL Student Life has recently finished another rollout of sexual consent workshops for first year students, bringing the total number of students receiving training in this area to over 1,000 since last September. These workshops have been a great success and would not have happened without the support from the university faculties and departments.”

Tara Brown, Project Coordinator for the ‘It Stops Now’ campaign, stated, “Every student has the right to an education free from sexual violence and harassment. ‘It Stops Now’ is based on the reality of student experiences, the majority of whom are women, and aims to empower students and universities to challenge the victim-blaming and toxic behaviours which feed a sexual violence culture. We are proud to work with the University of Limerick and UL Student Life on this campaign as they join universities across Ireland in demanding a zero tolerance approach. The mural reminds us of our shared responsibilities to believe survivors, become active bystanders, and always check consent. Universities play a vital role in changing cultural norms as the values students take from their experience here will shape a safer, more equal society for everyone.”

Limerick Printmakers at 20: LP at 20 Exhibition of New Prints at The Hunt Museum