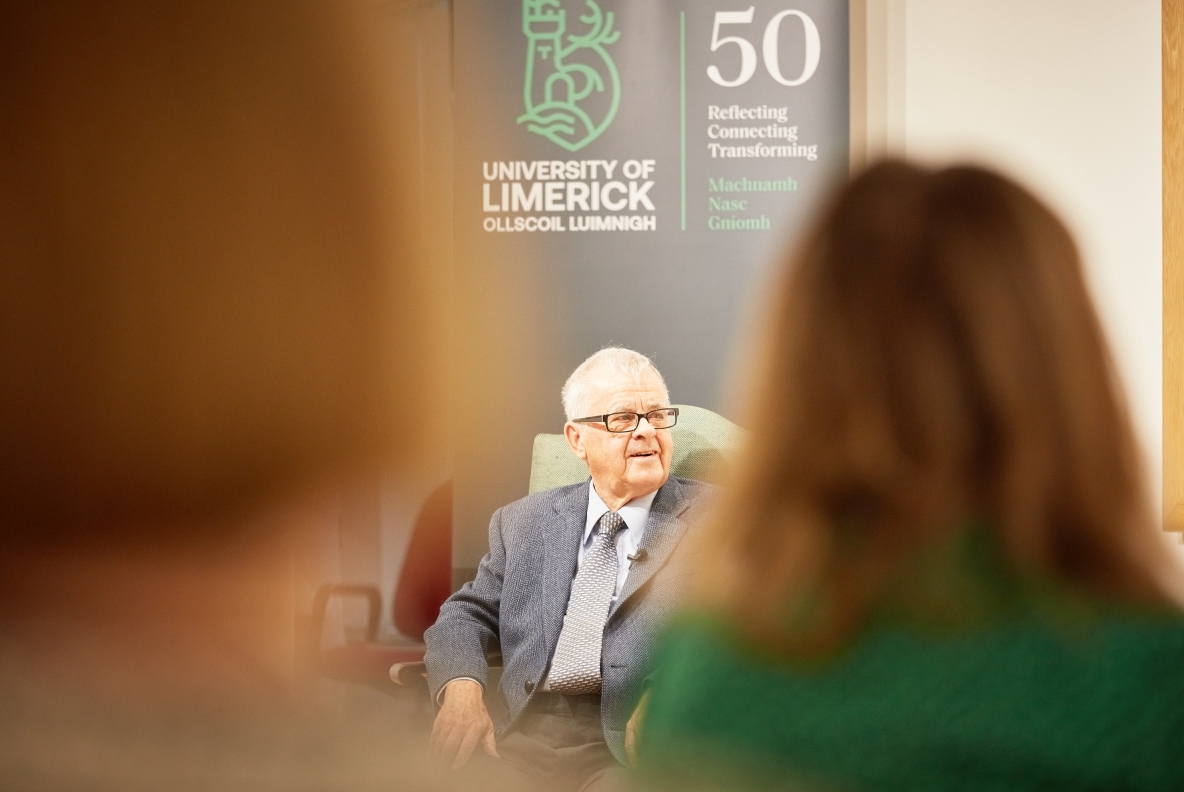 Aonad na Gaeilge – Liam Ó Dochartaigh pictured above at the special event to mark 21 years at the Irish Language Centre at University of Limerick.

A special event has taken place to mark 21 years of Aonad na Gaeilge, the Irish Language Centre at University of Limerick.

As the University marks its fiftieth anniversary this year, the organisers were very lucky to have Liam Ó Dochartaigh, a stalwart in the history of the University – and Thomond College/NIHE – present to give a wonderfully rousing interview on his life and fond memories of UL.

The event was held in the Bourn Vincent Gallery this Thursday where Cúirt an Mheán Oíche / Midnight Court, a visualisation of Brian Merriman’s poem, by Pauline Bewick is being exhibited until October 7.

To document the story of the promotion of the Irish language in Thomond College of Education (TCE) and in UL over the years, the celebration opened with a live public oral history interview with Liam Ó Dochartaigh.

At the time of the amalgamation of TCE in UL, Liam tried to ensure that the foundations laid in TCE in relation to Irish as an academic field, Irish in teacher education, and having an Irish language presence on campus, would be secured and safely transferred into UL. This was by no means guaranteed at the time, but it was achieved, and Liam is extremely gratified to see how Irish had prospered on the Plassey campus since his time.

RIAN, a series of 21 short videos was also launched as part of the event. RIAN, meaning to leave a mark or trace, celebrates innovation and impact in teaching and learning, language support, research, and community engagement at Aonad na Gaeilge 2001-2022, and the growing support of University of Limerick for the Irish language.

The inspirational address given by the late Professor Mícheál Ó Súilleabháin at the 10th anniversary celebration of Aonad na Gaeilge in 2011 was shown during the launch and warmly received by the audience. This address has been packaged as one of three feature videos from archived material in the RIAN series.

The second feature provides an overview of how Aonad na Gaeilge has showcased the life and work of Pádraig Ó Siochfhradha, An Seabhac over the years; while the third is from a more recent event, that of the launch of the Limerick Knowledge for Change Hub in 2019, a global UNESCO initiative which promotes and values the Irish language in university-community partnerships and projects.

Students, staff, researchers, community partners, and members of the public who have engaged with the Centre in various ways over the 21-year period participated in the RIAN series.

RIAN captures stories of some of those, who through their interactions with Aonad na Gaeilge, chose new directions in personal or professional lives – for example a change of occupation, becoming new speakers of Irish, deciding to raise children through Irish and so on. It also documents stories of well-being, growing confidence and belonging to a vibrant language community.

The RIAN series (21 videos) will be released from September 15 – December 15 on the Aonad na Gaeilge Vimeo channel and social media as part of the UL50 programme of events. The project is funded by HEA Special Provision for the Support of the Irish Language 2021.