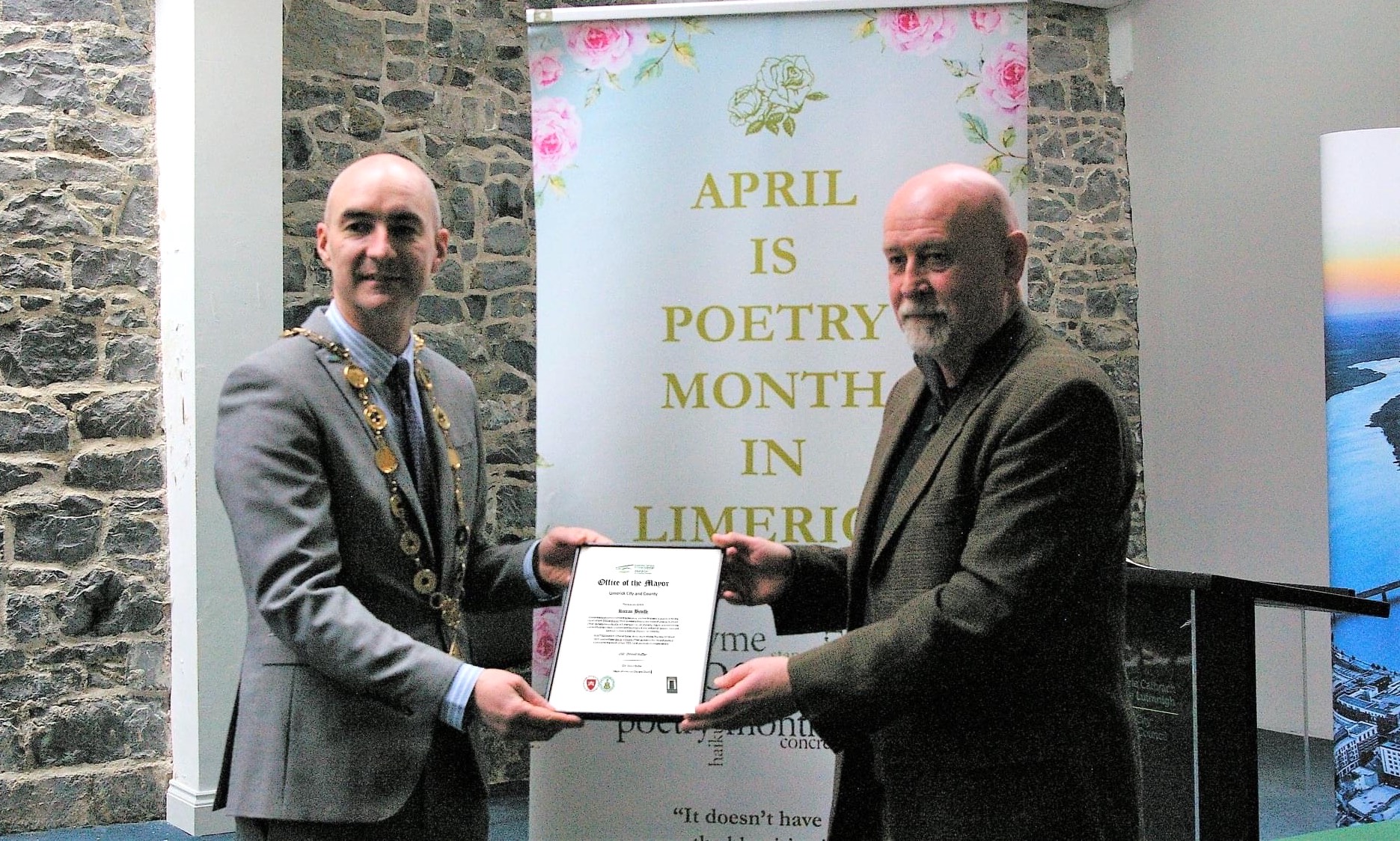 Limerick’s fantastic annual poetry festival April is Poetry Month in Limerick returns. Over 30 performers will share their talents across 20 events throughout the month of April.

Like many festivals and arts events, the annual April is Poetry Month in Limerick festival was paused for two years due to the pandemic. The organisers wish to remind the public that poets have an integral role to play in our culture and that poetry matters. The festival is back in full swing this year, and once again, beautiful poetry will fill the streets and intimate venues of Limerick this April! For the month of April, Limerick will showcase the best from the world of poetry, including local, national, and international guest readers. It’s a very special event that you wouldn’t want to miss!

The Mayor, Daniel Butler officially proclaimed April as Poetry Month in Limerick by signing the Proclamation and presented the poet Kieran Beville with his scroll of office. Speaking at the launch, Daniel Butler said that in his capacity as Mayor, “I appreciated the value of words and am delighted to be here to launch April is Poetry Month in Limerick”. He went on to say that the pandemic has shown the importance of arts and culture in our lives and poetry was one of the major ways people coped with the lockdowns. He emphasised how he values the passion of the organisers and encouraged the public to come out and support the events.

Dominic Taylor, director of the festival, thanked Limerick City and County Council for their continued support for the April is Poetry Month in Limerick 2022 event and their help to develop the festival further. He also expressed his gratitude to the mayor Daniel Butler for officially declaring that April is Poetry Month in Limerick. He spoke on the community aspect of the festival he said “poetry, like all genuine cultural activities, must have its roots among the “clay and soil” of its communities”.

Limerick’s poetry scene will be celebrated at this year’s festival with readings and pairings of poets including poet Tim Cunningham and Paris based Richard W Halperin who will read alongside Wexford poet AM Cousins on Wednesday, April 6 in The People’s Museum of Limerick at 7pm.

On the Saturday, April 9 between 10am and 1pm in Central Buildings, 51 O’Connell Street the Limerick Writers’ Centre present ‘I Am in Need of Music’, a music inspired creative writing workshop with poet and author Jessica Brown.

A memorial reading honouring the late Limerick poet Desmond O’Grady will take place on Thursday, April 13 at 7pm in The People’s Museum of Limerick with poets Adam Wyeth, Kieran Beville and Vivienne McKechnie. Adam Wyeth is the judge of the Desmond O’Grady International Poetry Competition for this year, and he will announce the winner of this year’s competition after the reading.

On Saturday, April 16 Quay Books and the Limerick Writers’ Centre present a lunchtime reading celebrating the poetry of James Joyce by having a recital of Joyce’s poems from his two books of ‘Chamber Music’ and ‘Pennyeach’.

UL Poet in Residence Emily Cullen and Limerick poet Eoin Devereux will read on Wednesday, April 27 at Sexton’s Bar, Henry Street and they will be joined by Tipperary poet Michael Durack.

The festival will also revive one of Limerick’s iconic reading series the White House Poetry Revival in the White House bar, 52 O’Connell Street, Wednesday, April 20 7pm to 9pm. The series was founded in 2003 by the late, legendary Barney Sheehan and for one night only all past readers and supporters are invited to relive those days of past glories and take part in the open mic. The special guest poet for this unique event will be senior Limerick poet John Liddy and master of ceremonies will be the festival’s Ollamh/Poet Laureate poet Kieran Beville. Also includes is a tribute to the recently deceased Limerick poet Mark Whelan.

An exciting lunchtime lecture series is also planned for the Limerick City Library (now located at Barrow House, Michael Street) with topics Surrealism in Poetry, the Transformational Power of Confessional Poetry, a lecture on Irish poet Sean O Riordain and his work and Fiona Clark Echlin will give a lecture on Poetry, Symbolism and the Sea.

New books of poetry from Revival Press will be published in the Limerick City Gallery of Art from poets Kieran Beville, Imelda Maguire and an tAthair Micheál de Liostún, poet and priest plus a new Limerick Broadsheet, edited by poet and author Eoin Devereux will be published by Limerick Writers’ Centre.

The festival is also looking back at one of Limerick’s most famous poet sons Michael Hogan, the Bard of Thomond. Local legend Mae Leonard will join Patrick Power and others for a celebration of his work in The Marquee @ Bake House 22, Nicholas St from 7.00pm Friday, April 29.

There is also a special celebration for UNESCO World Book Day on Saturday, April 23 at 1pm at Quay Books, Sarsfield Street, Limerick.

This year’s events (except workshops and concerts) are free and open to the public. So come and join the fun, you don’t want to miss out on this fabulous event!

The 7th annual festival will take place in various venues around Limerick/ Check out their Facebook page ‘April is Poetry Month in Limerick’.