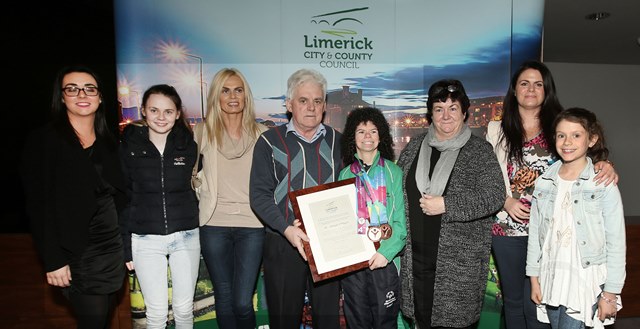 A Civic reception for Special Olympics athlete and two bronze medal, Daughters of Charity and O’Brien’s Bridge winner Ashleigh O’Hagan who was presented with a signed and framed scroll by the Mayor of the City and County of Limerick Cllr. Liam Galvin. Ashleigh is photographed above with her family, sister Erin, niece Naomi Hackett, aunt Dawn Hackett, dad Brian, Mum Philomena, sister Leanne and niece Faye Pearse. Photograph Liam Burke/Press 22 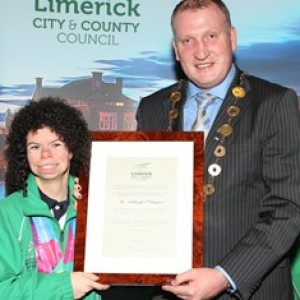 Ashleigh O’Hagan who was presented with a signed and framed scroll by the Mayor of the City and County of Limerick Cllr. Liam Galvin.
Photograph Liam Burke/Press 22

Limerick lady Ashleigh O Hagan who has brought “great honour to the Special Olympics, to her family, her friends, fellow athletes and the city and county of Limerick” was honoured with a civic reception this week.

Ashleigh was Limerick’s only athlete to compete in the games and her huge success was welcomed in her home town. Ashleigh, who hails from Derryhasna, O’Brien’s Bridge, County Limerick, was among 88 people from across the 32 counties who competed in various events in the City of Angels in late July and early August.

“Along with competitors from across the world, Ashleigh’s journey began many years before and involved plenty of hard work and sacrifice down through the years,” said Liam Galvin, Mayor of Limerick, who was speaking at the civic reception.

“Limerick City and County Council has honoured numerous men and women who have excelled in all sports. Today, my colleagues and I are delighted to be able to honour Ashleigh. You are a credit to your community, Lisnagry Special Olympics Club and of course, Limerick,” he added.

As well as flying the flag for Limerick and Ireland, Ashleigh, who is a gymnast with Lisnagry Special Olympics Club, was also doing all her teammates at the Limerick club proud.

While she is busy becoming Limerick’s latest superstar during her time in LA, Ashleigh has met some other stars. Ashleigh has been pictured with singer and ex-Pussycat Doll Nicole Scherzinger and Hollywood A-lister Colin Farrell.

Despite all the glitz and glam, Ashleigh’s proudest moment was winning her medals after all her hard work. “I’m really proud to represent Limerick. The Special Olympics is very important. It has given me confidence every step of the way. I’ve made loads of friends,” she explained.

Cheering Ashleigh on in LA were her parents Brian and Philomena and sister Erin. Her other two sisters, Dawn and Leanne, followed her progress from home. On returning to her native city, Ashleigh was greeted with whoops of delight and warms cheers by family, friends – and even some tourists – when she posed for photos at the city landmark, the Treaty Stone. Ashleigh is keen to thank everyone who has helped her on her journey to LA.

Speaking to Ashleigh’s sister Erin at the time of Ashleigh’s win she says: “Ashleigh began training with the gymnastics club in Lisnagry in limerick 12 years ago and she has since taken part in many Irish national special Olympic Games including Belfast in 2004 and Limerick in 2014. She has won many gold, silver and bronze medals competing in the ribbon, ball, hoop and rope events. Ashleigh thoroughly enjoys gymnastics which requires a lot of hard work, training and determination. She has never been one to shy away from a challenge and even though Ashleigh has a different ability, she has continued to strive from strength to strength and succeed. Most importantly, Ashleigh loves the sense of achievement that comes with it all.”

LIT in need of investment in facilities and infrastructure