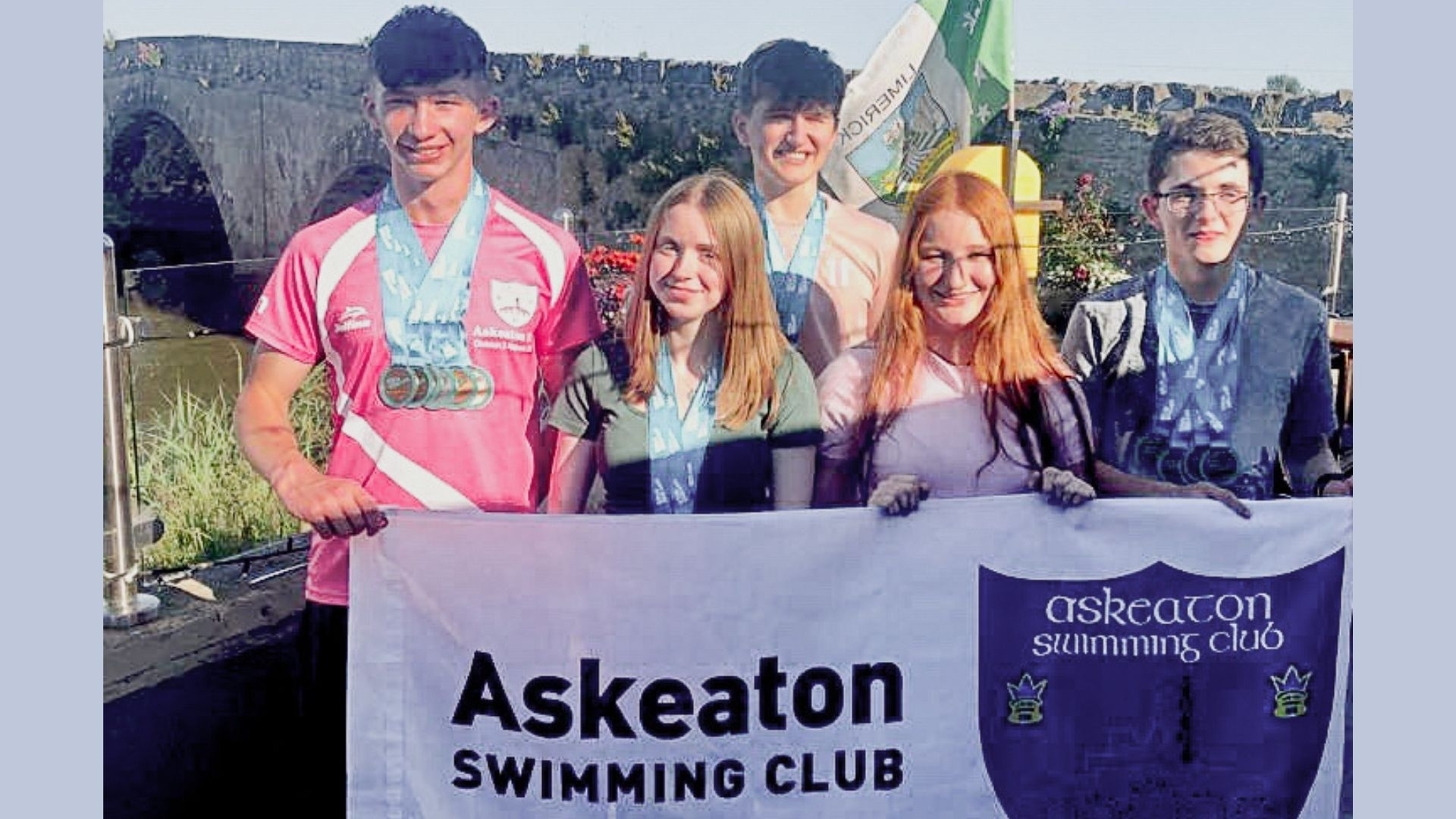 Askeaton Swimming Club swim to success at the Nationals

98 swim clubs from across Ireland were represented by 770 competitors

Last week, UL Sport Arena hosted the 2022 Irish National Division 2. Swimming kicked off on Wednesday, July 3rd, and continued until Sunday, July 7th. It was a fantastic event where 98 clubs from all of Ireland were represented by 770 swimmers. Askeaton Swimming Club was one of those clubs, with five swimmers in attendance, Sean Alfred, Emily Dore, Lily Faulkner. Cian Houlihan, and Jack Hutchinson.

Day 1 on Wednesday saw a strong start from the Askeaton Swimming Club swim team in the heats, with all four in action qualifying for the finals. Medals came home with Sean Alfred and Jack Hutchinson for their age groups. Sean got Bronze in the 100m Breaststroke and Gold in the 200m freestyle. Jack got Bronze in the 200m free. Cian Houlihan and Emily Dore both achieved Personal Bests in their events.

Day 2 was a busy day for the ASC athletes. Sean, Cian, and Lily all participated in their 50m freestyle events, with Sean and Cian qualifying for the finals. Sean, Cian, and Jack all qualified for the finals of 100m butterfly. Cian also qualified for the 200m breaststroke, gaining a new PB in the finals. At the end of the morning session, Emily had her 1500m freestyle event. Between PBs and medals, it was hard to keep track of for the Coach and Team Managers! Going home on Thursday, Sean had Gold for 50m freestyle and Bronze in 100m butterfly. Cian took Silver in the 50m free, and Jack won Gold in the 100m butterfly. Emily’s 1500m freestyle saw her win Silver after swimming strongly for 60 lengths of the pol at UL.

Day 3 came with blazing sunshine and extreme heat on the deck of the pool. The Coaches and Team Managers deserve medals for coping with the sweltering heat! Another successful day for ASC swimmers, with the ‘big one’ happening for the boys – the 100m freestyle event. We saw our club represented fully on the podium with Cian winning top spot for Gold, Sean winning Silver, and Jack in the Bronze position for their age groups. Emily gained a 4-second PB in her 400m free event. Sean was back on the podium to receive Silver for his 200IM, his last event of the Nationals. Jack was then in the top spot, winning Gold for the 1500m freestyle.

Day 4, and it felt like the end was in sight for everyone! A slightly quieter day at the pool, but no less successful for the Askeaton Swimming Club swim team! Cian brought home Bronze in the 400m free. Lily and Emily had 100m freestyle heats, with strong swims from them both. Emily qualified for the finals that evening, which saw her back on the podium getting a Silver medal for the 100m freestyle.

Day 5, another scorcher of a day outside from early in the morning as everyone arrived on deck. Jack and Emily were in the last event for ASC swimmers of the Nationals: The 800m freestyle. And what a way to round off the five-day event, Emily won Silver in her age category, and Jack won Gold. There was a visible relaxing of the shoulders all round at that stage, delighted and content for the swimmers and all their achievements. ASC’s time in UL and the melting heat was finished for now.

Considering the preceding 2.5 years where all the swimmers had interruptions to training and competition due to the pandemic and lockdowns; to see the Swim Ireland 2022 Irish National Division 2 run at full tilt was simply brilliant. From an Askeaton Swimming Club perspective, Head Coach Leona Blackwell, deserves recognition and thanks from the swimmers and their parents. Leona, and the coaching team, have diligently and professionally coached all the club swimmers with the results speaking for themselves at these Nationals. Anything is possible if you work hard enough for it, and Leona’s attitude and commitment is testament to that. In total, ASC brought home 16 medals from the 2022 Irish National Division 2 competition. Behind all the PBs and medals there are hundreds of hours of training, preparation, camaraderie, support, and commitment – by everyone involved: The coaches, parents, club officials, and the swimmers. ASC was one of the smaller clubs represented at this event, but what they may have lacked in quantity was most definitely made up for in quality!

Related Topics:Askeaton Swimming Club
Up Next