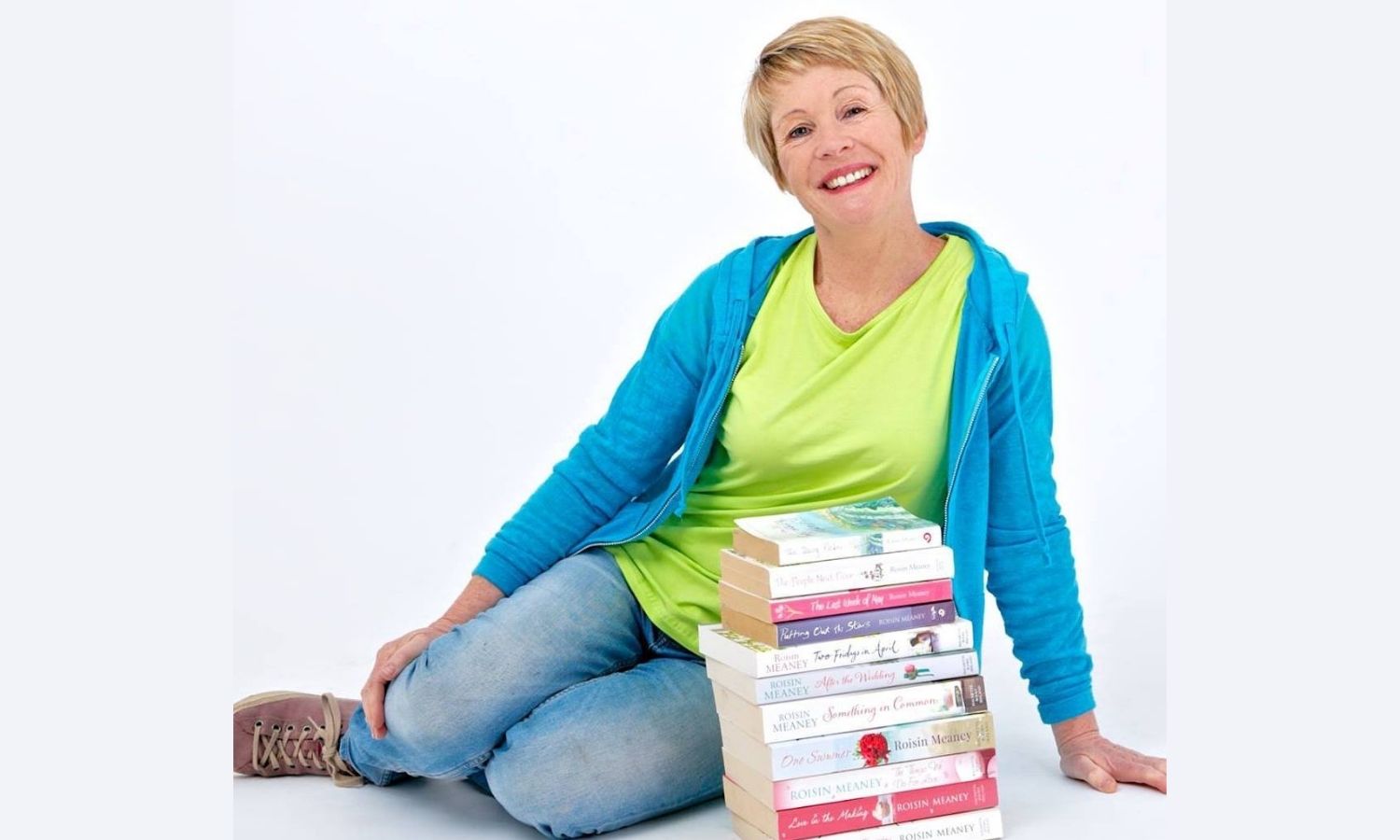 Author Roisin Meaney tells Ger Leddin, “I was reading since the time I learned how to. Eventually, I started to think I could write my own book because I had read so many of them.”

Roisin’s books, with twenty published to date, are about ordinary people and their lives and are no strangers to Ireland’s top ten bestseller list

Talking to author Roisin Meaney is a breath of fresh air. She has a charming, pleasant and cheery way about her. The sort of person that a chat with would lift you out of whatever doldrums you found yourself in.

It’s this trait, coupled with a way of crafting words into fictional but believable stories, that have positioned Roisin as one of Ireland’s most successful contemporary authors.

Her stories draw you into the lives of her characters and then keep you enthralled and entertained up until you’re forced to put the book down.

Author Roisin Meaney was born sixty-two years ago in Tralee, County Kerry. As an infant, she moved with her public-servant father, mother and siblings to Tipperary and then on to Limerick – a city she has called home for the majority of her life.

Speaking about her inspiration to begin writing, she says, “I was reading since the time I learned how to. Eventually, I started to think I could write my own book because I had read so many of them. I started at six reading the Noddy series, then moved on to Enid Blyton’s The Famous Five and The Secret Seven, and then on to the Nancy Drew detective novels.

“We were probably the last people in Limerick to own a television. God only knows how my mother afforded them (all the books). We read any books we could get our hands on and of course, we always had libraries — we had library books coming out our ears.”

In later years, working as a teacher and copywriter saw Roisin living in Africa, London and San Francisco, where her first novel was born.

That first novel, ‘The Daisy Picker’, was published in 2004, but it took four years of job-sharing as a teacher before the Limerick writer found the courage to take the plunge into being a full-time novelist.

Her books, with twenty published to date, are about ordinary people and their lives – Roisin describes them as escapist fiction – and are no strangers to Ireland’s top ten bestseller list.

She has been published in most European countries along with Australia and the US. Several of her titles have been translated into Norwegian, Danish, German, Italian Russian and Slovenian.

Surprisingly, even with all her literary achievements, Roisin was equally proud to tell me about winning a car in a sentence-finishing competition when she was eighteen.

“I won a Ford Fiesta from the back of a breakfast cereal box, she chuffed. “That was my first experience of earning from writing.”

The best-selling author does most of her writing at her kitchen table, though admits to occasionally lounging on the sofa with her laptop when the mood takes her. She alternates between her home in a quiet suburb on the north side of Limerick and a hideaway in Miltown Malbay, the small County Clare town just a stone’s throw from the Atlantic. Writing abroad, however, is difficult for her.

“In theory, I can write anywhere, but in practice, it just doesn’t really work. I’ve brought the laptop to various places like Lanzarote but I find that it’s too distracting — a nice warm climate and the sea, it just doesn’t work, so if I need to get serious writing done or have a deadline looming I stay put and work at the kitchen table either in Limerick or Milltown. That works best.”

All of Roisin’s novels are based in present-day Ireland. “Twenty years back is the extent of it. I’ve brought some characters on holiday. I’ve used San Francisco, a city I’m very familiar with, to set some scenes.”

Most of her books are set in fictitious towns, usually around the west of Ireland, the part of the country she is most familiar with.

I asked Roisin if it takes a certain mindset to write about romance. In the nicest possible way, she put me in my place, describing her books as “being about people or slices of life. Normal everyday happenings between people. How they interact with each other. Yes, there would be love because that comes into life but it wouldn’t be the be-all and end-all, there is so much else going on in them. Anyway, I wouldn’t regard myself as romantic being a confirmed singleton.”

We spoke about the techniques she employs when researching a novel.

“I usually find someone and pick their brains. I’ve researched many people over the years, a teacher, fireman, doctors and nurses.”

Currently, she is toying with a plot that includes beekeeping and already has her next research subject, or “victim”, lined up – “although he doesn’t know it yet!”

She adds knowingly, “Only write on something you know about. If you don’t know, learn. Nothing is as bad as writing that rings false.”

Does Roisin set out to deliberately promote Ireland through her books?

“If I’m brutally honest, I know I’m writing fiction and I don’t set out to sell Ireland as the perfect place to come and visit. But my books have a very strong Irish flavour, which is popular in America. The dialogue is realistic,” which she is sure gives translators some headaches.

“A pity about them,” she jokes in a confident Irish woman’s tone.

I asked Roisin if she believes the Irish are better storytellers than those elsewhere. She is not sure of this, saying, “They say we are, but I really don’t know. I think we can tell a tale for sure. We have some excellent writers in Ireland, the likes of Donal Ryan, Anne Enright, Colm Tóibín and so many others, who can all spin a good and entertaining yarn, so yes – maybe we have an edge.”

The author’s plots and storylines are found, as she puts it, “Everywhere, and all over the place. I try to keep my eyes and ears open when I’m out and about. One time, I got an idea from a woman I met at a reunion. She said to me, ‘Wouldn’t a reunion make a great topic for one of your books?’, and it did. Inspiration can come from all manner of things — even the TV news can give you a nudge in the head.”

Roisin’s latest book, Life Before Us, is due for release on June 9. It tells the story of George, who is trying to get over the death of his daughter’s mum, and Alice, who finds out her boyfriend is lying to her and returns to her hometown with a heart that’s been trampled on.

As Roisin writes, “One fact about love. It’s out there for George and Alice. All that needs to happen is for them to meet.”

Roisin added that a new plot is rattling around in her head at the moment, and should be on the shelves by Christmas 2023. After that, she is not too sure – but as they say in the best publishing circles, “Watch this space.”