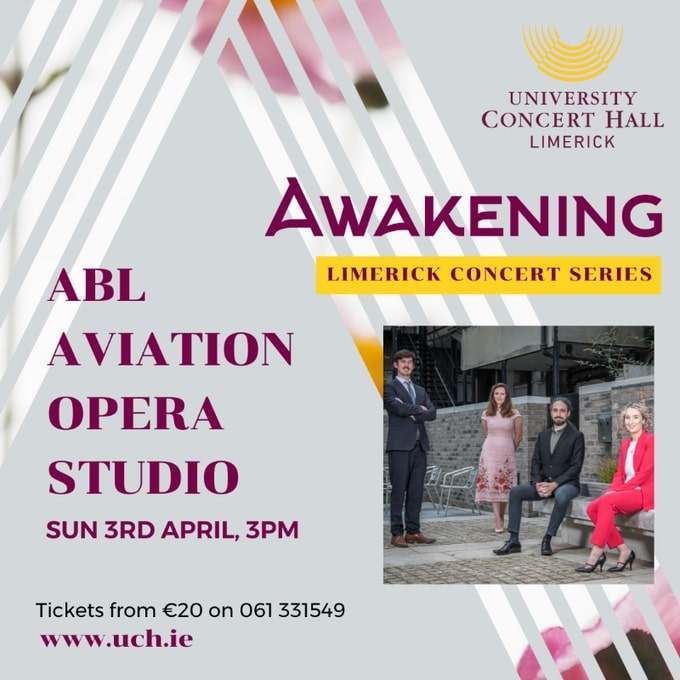 The series will open on Sunday, June 3, with performances from The ABL Aviation Studio

University Concert Hall (UCH) is delighted to announce details of its annual classical Awakening Limerick Concert Series, which will take place this Spring. The series, which is in its second year, will be presented by Lyric FM’s Liz Nolan and will include Sunday afternoon performances from much loved Irish classical performers.

Speaking about the Awakening Limerick Concert series UCH Director Sinéad Hope said “We launched the Awakening Limerick Concert Series last year in the height of Covid restrictions which meant much of the series was streamed online, without a live audience. Naturally, we are delighted to be able to present this year’s series to a live audience and we’re very excited about this year’s line-up of incredible Irish talent.”

The series will open on Sunday, June 3, with performances from The ABL Aviation Studio which features artists participating in the Irish National Opera’s annual artistic development programme. In a programme of opera favourites from well-loved classics such as ‘La bohéme’, ‘The Marriage of Figaro’ and ‘La Traviata’, this is a chance to hear some of Ireland’s most promising opera singers sing some of the greatest pieces in the operatic canon.

The series continues on Sunday, May 8 when acclaimed Irish pianist John O’Conor performs a beautiful programme of Beethoven Sonatas. O’Conor has been gathering wonderful reviews for his masterly playing for over forty years and has performed with many of the world’s leading orchestras including the London Symphony, Royal Philharmonic, Vienna Symphony, and the NHK Orchestra in Japan.

Awakening Limerick Concert closes on Sunday, June 5 with Camerata Ireland who will perform a concert of Mozart and Beethoven. Established in 1999 by international pianist, conductor, educator and recording artist Barry Douglas the chamber orchestra brings together the finest Irish musicians to celebrate the wealth of musical talent from within the island of Ireland.

To buy tickets to the Concert Series, go HERE