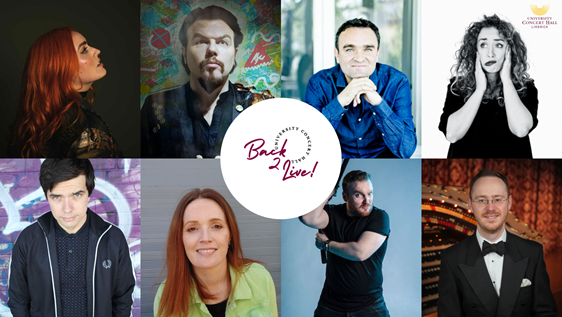 University Concert Hall (UCH) has today announced details of its much anticipated re-opening following last week’s government announcement regarding increased capacity for indoor events. To celebrate their re-opening and the return of live audiences, UCH has announced details of a jam packed ‘Back 2 Live’ series featuring music from the Irish Chamber Orchestra, Jack Lukeman and Róisín O, hilarious comedy with Emma Doran, Chris Kent and Mickey Bartlett and a number of cinema screenings across the Autumn season.

Speaking of the re-opening, UCH Director Sinead Hope said “We can’t wait to open the doors of UCH and welcome live audiences once again. It’s been an incredibly challenging 18 months for us all but the support from our customers, Friends and sponsors during our closure has been incredible. We’re looking forward to seeing them all again and hosting some fantastic shows as part of our Back 2 Live series.”

The venue will initially re-open with a capacity of 60% when The Irish Chamber Orchestra perform an evening of Mozart and Strauss on Wednesday, September 15. With Jörg Widmann at the helm the concert will offer an evening of celebration as the lights of UCH are finally turned back on and over patrons fill the seats.

As part of Culture Night 2021 UCH will host an evening of ‘Classics and Chaplin on the Compton Organ’ on Friday, September 17. The Compton Organ has been in situ at UCH since the venue’s inception in 1993 but has been silent since 1999. Having undergone extensive refurbishment works the Organ has now been restored and, with Richard Hill performing, will take centre stage for this year’s Culture Night!

The Back 2 Live series will welcome award-winning, international artist Jack Lukeman on Thursday, September 23. Lukeman will perform some of his own, much loved songs together with a variety of songbook specials from legendary artists like Leonard Cohen, David Bowie, Bob Dylan, Johnny Cash, the Beatles, Stones and even some 80s hits!

Continuing the Back 2 Live series singer, songwriter Róisín O takes to the UCH stage on Thursday, November 18 by which point UCH hopes to have received the green light to host shows at full capacity. Roisin’s first time to perform at UCH, she will perform many of her hits including ‘Give It Up’, ‘Warn Me of Silence’ and ‘Heart+Bones’.

The Punchline Comedy series, hosted by Tom O’Mahony, also returns with a lineup of some of the best Irish comedic talent including Chris Kent on September 29, Emma Doran and Julie Jay on October 27 and Mickey Bartlett on the November 24.

A number of cinema screenings are also programmed to take place as part of the Back 2 Live series at UCH including National Theatre Lives production of Follies’, ‘Romeo and Juliet’ and family favourites ‘The Wizard of Oz’ and ‘The Addams Family’.

The calendar for 2022 is also filling up at UCH as the venue is set to host some of the biggest names in music and comedy in the New Year including comedian Dara Ó Briain on January 14, country music star Nathan Carter on February 4, rock/pop legend Joe Jackson on March 13 and Irish folk group Clannad on March 24.