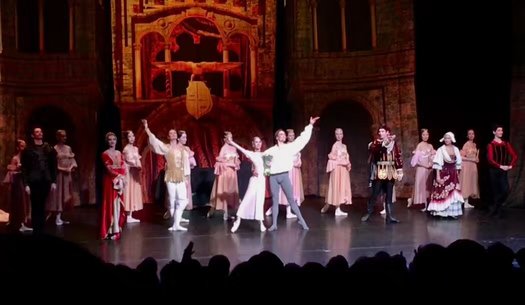 Lights went off, music on. Spotlights were shining on the stage. A group of female dancers turned up, dressing in the style of the sixteenth century. Their steps of ballet attracted applause and cheers from the audience. Later, the colours of the lights changed, the tone of the background music became softened and gentle. The story of love and tragedy was on show.

The concert hall became quiet while the minds and thoughts of the audience were captured by the steps of dancers on the stage. Pirouette, Saute, Echappe… (terms in ballet) or even just a slight movement of suivi arose the emotion of the audience.

Everyone that was watching the show was breathing with the characters and experiencing their love and hate.

It was the ballet, Romeo and Juliet performed by the Royal Moscow Ballet at the concert hall of University of Limerick.

Originated by William Shakespeare, the ballet show of the romantic tragedy, Romeo and Juliet became a hit in Limerick when it was brought to the stage. All of the seats at the concert hall were taken while tickets were sold out on March 5.

Alexander, the audience member who got the last ticket from the box office, said “I feel so lucky and it is the show that I have been waiting for.”

Shakespeare’s works have brought great inspiration and huge changes to the art of dance. Many plays written by him have turned into the source of ideas for dance dramas. The universality of Shakespeare’s theatrical themes became an enduring immortality in ballet. The dance drama “Romeo and Juliet” is undoubtedly a brilliant handed down boutique.

We were glad to witness the charm and beauty of this amazing ballet drama in Limerick in March.

“Thank you Limerick, for providing such a great show.” said Mr.Ó Gallchóbhair from County Sligo,”It’s the first time that I’ve been to a ballet and it leaves you with a sense of joy and elegance. I enjoyed it.”

The University of Limerick seeking to build a new university town