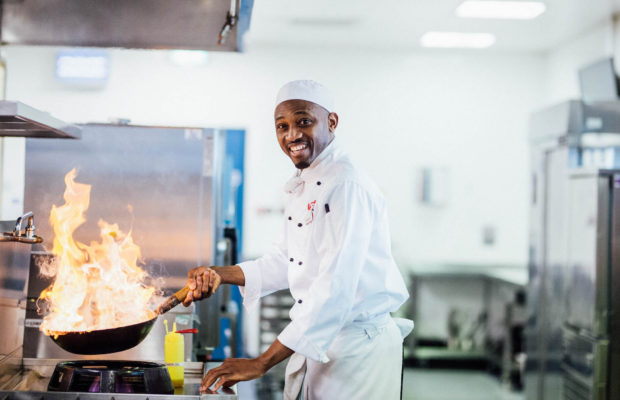 Limerick’s Multi Culinary Award Winner Bangaly Doumbouya has added the gold medal from the prestigious Chef Ireland Competition to his growing list of accolades, all the while continuing as a second-year Culinary Arts student at Limerick Institute of Technology.

A former asylum seeker from Guinea, West Africa, Mr Doumbouya first came to the midwest of Ireland in 2007. He spent five years in Knockalisheen Direct Provision Centre, Meelick, Co. Clare before he was granted refugee status.

Last week, the talented student chef beat off stiff competition from professional and student chefs from all over Ireland and was awarded the highest possible prize in the Asian Cuisine Competition by the World Association of Chefs Societies and the Panel of Chefs of Ireland.

“Bangaly is an outstanding student and to win this competition is a testament to his hard work and dedication here at LIT,” he said.

“His delicate use of spices and aromas in his dish was commended by the judges which included competition sponsor Kwanghi Chan of Chan Chan foods.”

Bangaly began his love affair with cooking and culinary art when he secured his first job in 2013 as a kitchen porter in the Castletroy Park Hotel. He then worked at Hampton’s restaurant for a further two years.

When he then joined the team at the Shannon Springs Hotel, Executive Chef Anthony Walsh gave Bangaly the opportunity to be a Commis Chef. He immediately identified the new employee’s huge potential.

Bangaly was successful in his application as a mature student to the Culinary Arts programme at LIT and hasn’t looked back since.

“Studying culinary arts at LIT and becoming a chef was all I ever dreamed of doing. I am so happy that I can study what I love at LIT, which has also given me the opportunity to complete a 3-month work placement at Dromoland Castle Hotel,” he added.

“I am very excited about the future for myself and my family as I look forward to hopefully graduating in 2020 and beginning a career in a job I am passionate about.”

Joe Mulcahy, Section Head Culinary & Hospitality at LIT’s Sports, Leisure and Tourism Department said, “We are very proud of Bangaly at LIT and would like to congratulate him on both his awards. I have no doubt with his determination, hard work and skill we will be hearing a lot more about Bangaly during his time at LIT and in his future career.

“LIT is a higher education institution that holds inclusivity and access to education among its core values. By opening up education and training to everyone we ensure talents are nurtured, sustainable careers developed, and in many cases dreams realised. This, in turn, benefits both the individual and society as a whole.”