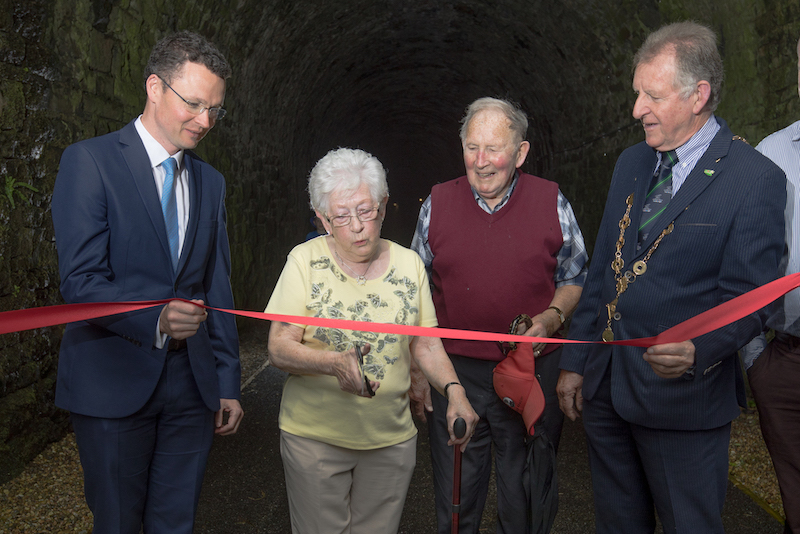 Barnagh Tunnel: Limerick City and County Council has announced the re-opening of the Barnagh Tunnel to the public. Pic: Marie Keating

Limerick City and County Council has announced the re-opening of the Barnagh Tunnel to the public, completing the latest phase of the re-development of the Great Southern Greenway Limerick (GSGL).

A ribbon-cutting ceremony has taken place at the eastern entrance to the tunnel marking the incorporation of the tunnel into the Great Southern Greenway Limerick.

The incorporation of the Barnagh Tunnel onto the Great Southern Greenway Limerick involved the construction of an underpass under the N21 Limerick to Tralee road.

It will add a further 1.3km onto the Greenway and increases safety for walkers and cyclists who, previously had to cross the N21 to the viewing and picnic areas and the tunnel. 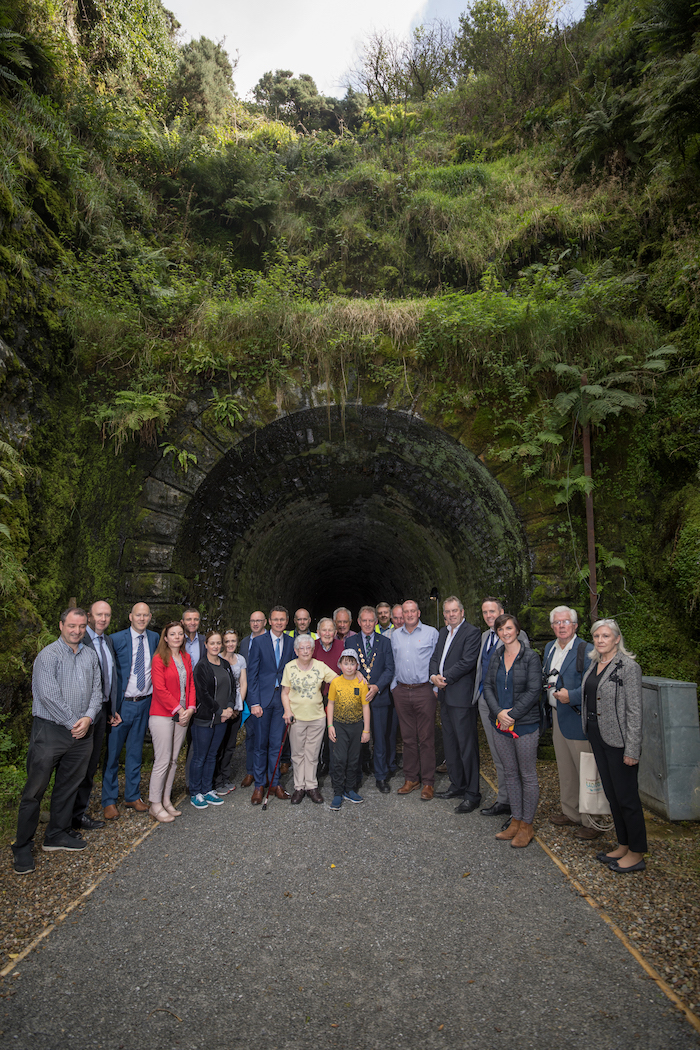 The ribbon-cutting to mark the Integration of the Old Barna Tunnel into the Great Southern Greenway at Barna (Pic: Marie Keating)

Michael Sheahan, Mayor of the City and County of Limerick Cllr, said: “The opening of the Barnagh Tunnel marks an important stage in the development of the Great Southern Greenway Limerick into a world-class amenity for the people of Limerick and further afield.  By having this Limerick Greenway open means people of all ages can get that all-important exercise hit while viewing some beautiful scenery.”

The works were funded from the Hinterland Fund and the Rural Regeneration and Development Fund with monies matched by Limerick City and County Council.

The tunnel itself is over 100m long, with rock-cut approaches at either end and stands as a testament to the sophistication of 19th-century engineering.  The re-opening of the Barnagh Tunnel connects the Limerick Greenway directly with the nearby viewing point and rest area, which offers unparalleled panoramic views of the plains of Limerick and the Golden Vale.

Since Limerick City and County Council took over the management of the Great Southern Greenway Limerick in 2015, the local authority has embarked on a multi-million euro redevelopment of the 39km route.

Gordon Daly, Director of Community Development with Limerick City and County Council, added: “I would like to pay tribute to the work of the former custodians of the greenway for all their hard work through the years. The Council is now well advanced in the complete upgrade of the route with a new surface and enhanced signage to be undertaken in the coming months.

“The revamped Limerick Greenway is increasingly popular for walking and cycling off-road, along the 39km route connecting the towns of Rathkeale, Newcastle West and Abbeyfeale. This route is now augmented by a series of Town Loop routes around these principal towns along the Greenway and now the Barnagh Tunnel.

“We are continuing to commit resources to the Greenway to bring it up to national standard, which will lead to increased tourism and economic benefits for West Limerick,” he added.

A range of other upgrades already funded by Limerick City and County Council and the Hinterland fund have included crossing points, fencing, track surfacing, bridges and signage.

Patrick O’Donovan, Minister of State for Finance, Public Expenditure & Reform, said: “Bringing back the Barnagh Tunnel to its former glory is a massive achievement. The original tunnel was constructed by people who had very limited equipment and tools available to them and to see the workmanship in its current condition is just magnificent.”

“I know that it will be a huge attraction for the Greenway and as someone whose family is deeply rooted in the railway, I’m proud to be here with the Mayor Cllr. Michael Sheahan to be cutting the ribbon to officially open it and giving it a new life as a visitor attraction and local amenity,” he added.

Limerick City and County Council also received €2.7 million for the further development of the GSGL last December from the Rural Regeneration and Development Fund (RRDF).

The Great Southern Greenway Limerick is also a designated section of the EuroVelo Route1, which runs parallel to West Europe’s Atlantic coast stretching from Portugal to Norway. This designation links Limerick with the wider EuroVelo cycling community and also bolsters Limerick’s position as a gateway to the Wild Atlantic Way.

Get involved in the development of Limericks Laneways