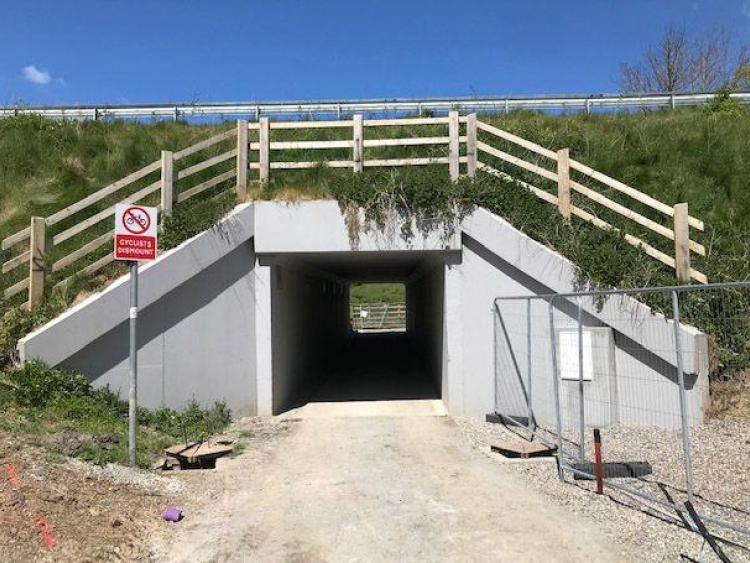 The design theme for the mural is a Historical Railway theme

Limerick City and County Council want to commemorate the Limerick to Tralee Railway line and are calling on artists to submit proposals before May 25 for a new mural on the Limerick Greenway at the N21 Barnagh Underpass.

The Limerick Greenway has been identified by the council as a priority project in West Limerick, investing in the physical upgrading of the original Great Southern Trail to full Greenway status. The development of the Greenway as a national and international tourism product is a key factor to ensuring the overall success of Limerick as a tourist destination.

Following the old Limerick to Kerry railway line, the Greenway seamlessly links West Limerick’s towns and villages with some of the country’s most fertile pastures and historic sites.

The design theme for the mural is a Historical Railway theme, paying homage to the old Limerick Railway while incorporating the Limerick Greenway logo. The line from Limerick to Tralee opened in 1880 and continued as a passenger service until 1963 and as a goods only service until 1977.

Along the route are the cast iron Ferguson’s Viaduct, the 100-metre long Barnagh Tunnel and two Victorian Era marvels that helped level the train’s path as the line was expanded towards Kerry. As the plains of Limerick met the mountainous area of the Sliabh Luachra on the border with Cork and Kerry, Barnagh station was an essential stop for steam locomotives to replenish their coal and water, so they could continue the journey.

The route starts at Rathkeale or Abbeyfeale on the Limerick-Kerry border and can be joined at any of the entry points located at key stops along the Greenway, allowing you to experience the Limerick Greenway in one visit, or explore in shorter stages and is perfect for day-trippers.

Limerick City and County Council are seeking proposals for a new mural on the Limerick Greenway at the N21 Barnagh Underpass, commemorating the Limerick to Tralee Railway line, on which route the Greenway follows. https://t.co/T06oc69bEy pic.twitter.com/2BHJSQNbbB

Along the way, visitors can walk or cycle through a Victorian Era railway tunnel, visit ancient castles and abbeys, bask in the solitude of a native forest, and meet the people that make Limerick unique.

The Limerick Greenway offers an authentic experience of rural Ireland for cyclists, runners and walkers. The official opening of Limerick Greenway will take place on Friday 25 June 2021 and the council want the mural to be complete and in place for the opening ceremony by Friday, June 18, 2021.

Limerick Going for Gold 2021 set to come back this summer