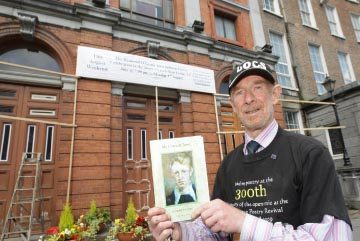 Barney Sheehan celebrating the 300th week of the Poetry Corner.

There are many ways to describe the Limerick legend, Barney Sheehan, who in his eighty-four years of life managed to become a jockey, a leather craftsman, a writer and what most know him for, a poet.

In his long life, he experienced so much and helped to make the world better. He was responsible for the White House’s weekly open mic night, which gave everyone the opportunity to walk in off the street and learn about poetry, as well as get the chance to perform their own poetry, which until 2003 was practically unheard of.

His work to equalise poetry in Limerick made him a legend, and even gave him the title of “General Custer of poetry in Limerick” by Tom McCarthy. Many of Barney’s contemporaries have their works published because of his role in giving them a space to develop as poets, however, Barney’s own poetry has never been published. Because of this, Dominic Taylor, a good friend of Barney’s and who ran the Limerick Writers Centre, is currently in the gathering stages of bringing out Barneys personal collection in memory of him.

Darragh Roche, the succeeder of Barney and Tom McCarthy told the Limerick Leader, “The Limerick Poets’ Society wouldn’t exist without Barney Sheehan. We carry on his legacy every week because he believed in giving everyone a chance to be a poet. We are all so grateful Barney for giving the best years of his life to this cause.”

Barney Sheehan passed away recently, leaving behind him a full life, and being missed by his nephew Jack, niece Mary Mc Namara, brother-in-law John, grandnieces, grandnephews, relatives, neighbours, and his many friends as well as all the lives he has touched with his work in Limerick.