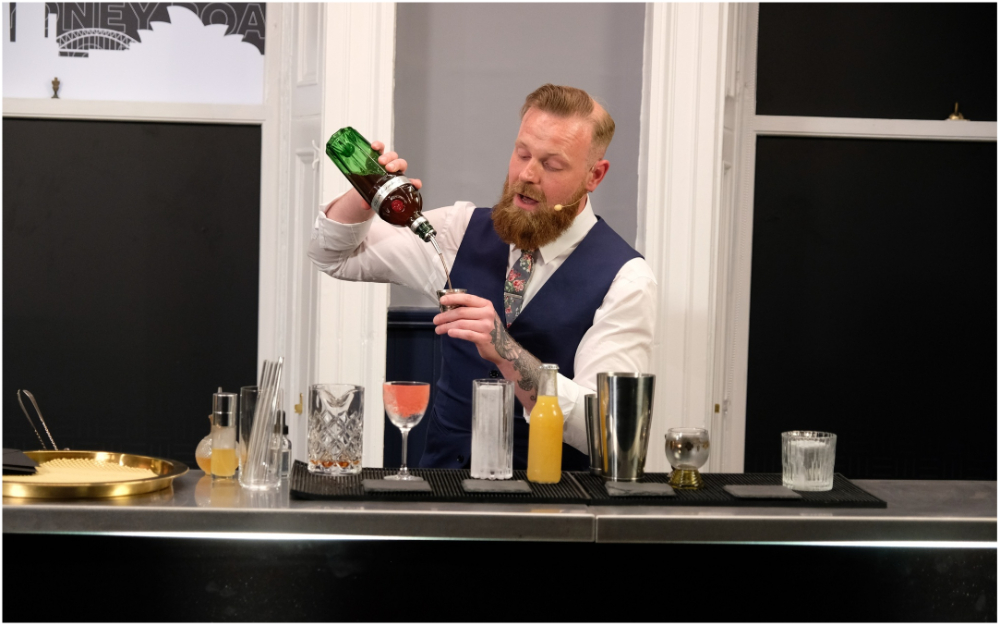 The National Final of Diageo Reserve’s World Class Bartender of the Year 2022 Ireland took place in Three Storey, Dublin on Monday the 30th of May where Bartender Mark Cooney of the NolaClan Group was crowned the winner.

Five finalists battled it out in the Aperitif & Digestif: Precision & pressure challenge and Fist Full of Roses, Ketel Opus.2, Grinning Beggar, Moon and Harbour were among the winning Aperitif & Digestif cocktails by Mark Cooney.

The challenge was designed to test their skills at pairing their creations against 4 unique dishes prepared by Chef Mark.

Ketel One Vodka then was to be paired against his Aperitif Starter of Chicken liver Royale, passion fruit, pineapple, Roasted coffee. Don Julio Tequila was paired in a digestif against Mark’s Digestif desert of seaweed caramel custard, redcurrant, hazelnut, wood sorrel.

The competition welcomed Emmy Pip Knight from The Sitting Room @ Delahunt in Dublin, Mark Cooney from the NolaClan Group in Limerick, Eoin Lynne from Cask, Cork, Emanuele Martucci from the Americana Bar in Dublin, and Kevin Hegarty from Glovebox in Dublin with Mark Cooney claiming the coveted title in the end.

Bartender Mark Cooney will go on to represent Ireland at the World Class Bartender of the Year Global Finals in Sydney in September where they will demonstrate their innovative approach to cocktail creation on a globally renowned stage, competing with over 54 bartenders from around the world.

Mark Cooney, winner of the World Class Bartender of the Year 2022 Ireland said, “The World Class competition is a true test of skill & passion, and really encourages the cocktail culture across the globe. It helps to shine a positive light on the creativity and skill involved in cocktail creation and this year’s challenge involving food pairing was fantastic.

“I’m so happy with the result given the calibre of my competitors and I’m honoured to be flying the flag for bartenders across the country when I represent Ireland on the global World Class stage in Sydney in September”.

“We were delighted to run the World Class programme in a fully live format again after a tough few years for the industry.

“It was great to be back in the bars, supporting our trade partners and the talent they entail, and to bring the food element to the final with Chef Mark was a real sign of where the industry is going – providing quality flavour experiences and world class hospitality for guests.

“We want to congratulate Mark and are looking forward to seeing what they do at the global final, live from The World Class Sydney Cocktail festival this September.”

“The World Class programme fosters innovation and creativity, with our challengers’ creations becoming more impressive year after year. Mark Cooney, our 2022 Irish champion, did not disappoint, crafting serves that continued to excite the judging panel as the evening progressed.

“We are so proud of Mark, a worthy winner who will thrive as a World Class ambassador in the coming year.”

On September 12 – 15, Mark will compete in the World Class Bartender of the Year 2022 Global Finals in Sydney, Australia.

The five-day event will be jam-packed with immersive opportunities for spectators to observe the action as well as participate in incredible World Class Brand experiences.

He will compete virtually from Ireland against 54 other contenders from across the world as they sip, shake, and mix their way through a series of innovative tasks in the quest for the coveted title of World Class Global Bartender of the Year 2022.

Related Topics:bartenderMark Cooney
Up Next