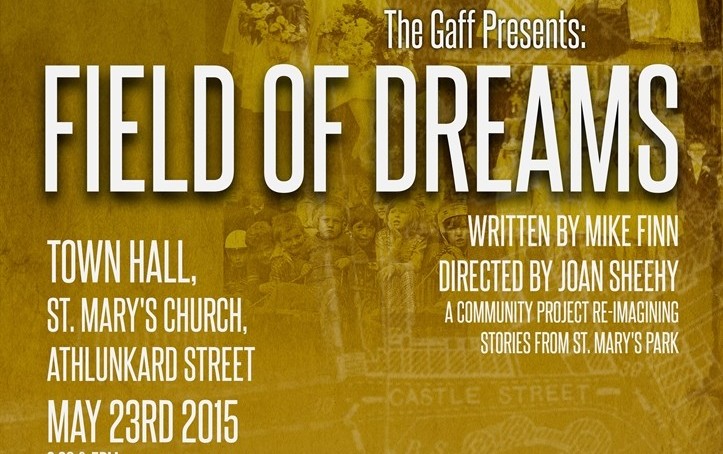 The Bealtaine Festival’s Field of Dreams

The Gaff, one of Limerick’s newest theatre initiatives is currently working with Kings Island Senior Citizen Group and members of Limerick Youth Theatre on an intergenerational, performance-based project Field of Dreams to take place on May 23 during the Bealtaine Festival. Field of Dreams, a drama and storytelling project, will see several short performance pieces, written by prolific Limerick playwright Mike Finn (Pigtown and The Unlucky Cabin Boy), that have been inspired by stories about growing up in St. Mary’s Park on King’s Island. Operating on volunteer management and with support from the PAUL Partnership, LIT, J.P McManus Foundation, Umbrella Project and Limerick City Council, The Gaff aims to open up artistic activity in Limerick by creating a direct avenue of connection between artists, community groups and the wider public. The Gaff strives to enable such connections through the development of specific cultural initiatives designed to allow access to everyone irrespective of age, ethnicity, gender or economic status.

“We’re as permanent as King John’s Castle. As formidable as the Curragower Falls. We are the daughters of seamstresses and pork butchers. The children of fishermen and dockers. Grandchildren of millers and soldiers. Descendants of Celts, of Danes, of Normans,” explains Mike Finn, the playwright of Field of Dreams.

Within this ideological framework, Field of Dreams director Joan Sheehy (The Colleen Bawn Trials, Anything But Love) is working with members of Limerick Youth Theatre, turning stories from Limerick’s older residents into performances. The cast includes Siofra Barry, Marie Boylan, Issey Fenton, Lauren Griffin, Chloe Hennigar, Muireann Hogan, Ellen King, Luke O’Doherty, and Monica Spencer. Marie Boylan (project manager), recent Irish Times Theatre Award nominee and Gaff Board Member says, “We want to create arts opportunities that are open in every way – for all ages and all communities”. Mike Finn, a writer who’s originally from Thomondgate, says “It’s been an incredible journey, gathering stories from the women of King’s Island Senior Citizen’s group, the stories have been truly inspirational and I’ve tried to capture moments of sadness and good times in the writing.”

Step back in time and immerse yourself in stories about nuns playing tennis, Elvis, childhood mischief, falling in love, spectacles, Cleeves toffee and the opening of the Grotto in St. Mary’s Park in 1955. Field of Dreams is a nostalgic trip down memory lane, a glimpse of growing up on the Island in the 1950’s and 1960’s.

Field of Dreams will be performed in The Town Hall, located on the grounds of St. Mary’s Catholic Church, Athlunkard Street at 2.30pm & 5.00pm on May 23. Booking is essential as spaces are limited. Please contact 085 182 7981 or email [email protected] for more information. Tickets €8/ €5 concession. A performance will also take place in The Gaff (36 Cecil Street) at 7PM on May 24. Suitable for all ages.

Read more about the Bealtaine Festival on their website here.

Limerick to host Jumping in the City