By Richard Lynch on September 16, 2017@richanthon 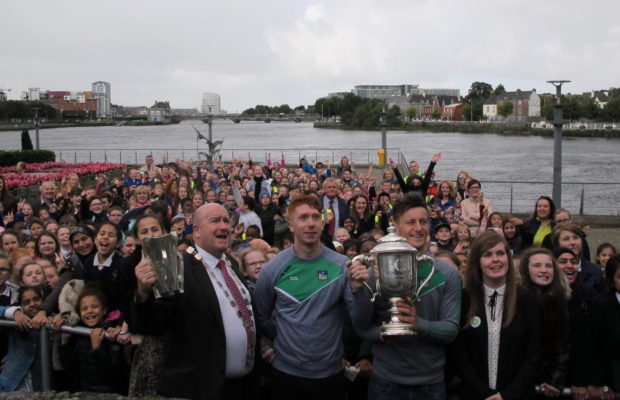 Pictured at the Beat the Street 2017 Programme launch were Sean Lynch, Mayor of the Metropolitan District of Limerick, Cian Lynch and Tom Morrissey, Under 21s All Ireland Hurling Champions and Anna Grant, organiser of Beat the Street with partaking Limerick school kids. Picture: Maxine Bramley/ ilovelimerick.

Limerick’s city-wide walking and cycling competition that challenges local residents to see how far they can travel together in just seven weeks is kicking off.

Beat the Street 2017 is an innovative physical activity initiative that inspires thousands of people to get moving by transforming local communities into a giant game.

Running from Wednesday 13 September 2017 to Wednesday 1 November 2017, Beat the Street will see schools, businesses, families, charities, and individuals across Limerick compete to see who can walk, run, cycle or scoot the furthest.

Dozens of beeping and flashing sensors called Beat Boxes have been placed across Limerick which can be tapped with free Beat the Street cards which can be collected at your local distribution point.  Players can set up a team or join many of the other teams or even play individually to start earning points and prizes!

More than 8,000 people have travelled 16,000 miles in just six days for Beat the Street – a free competition which challenges people to see how far they can travel across Limerick in return for points and prizes.

Taking place until 1 November, Beat the Street is transforming Limerick into a giant playing field with players tapping special sensors called Beat Boxes dotted across the city. The response to Beat the Street has been incredible with thousands of people visiting their local distribution points to pick up a card and get involved.

Julie McLoughlin from The Granary Library said: “We have been completely overwhelmed in the past week with people coming into The Granary Library wanting to play Beat the Street. From the conversations we have been having with visitors it is clear that the game has captured the excitement of everyone living in Limerick.”

66 schools and teams in Limerick are competing against each other to see who can journey the furthest and win up to hundreds of Euros worth of sports and fitness equipment. After one week, Gaelscoil Chaladh An Treoigh is currently sitting on top of the leaderboards with an incredible 1,000 miles travelled together – but with six weeks left it is still all to play for.

Speaking at the launch held at the corporate headquarters of Limerick City and County Council in Merchant’s Quay Mayor of the Metropolitan District of Limerick Cllr Sean Lynch said: “Beat the Street is a fantastic initiative to help get people active.  It’s all about inspiring and encouraging people to make small changes, such as walking or cycling to school or work or to the shops every day, to improve their health.”

“We can all do better when it comes to exercise.  Just walking up and down the stairs in work rather than taking the lift.  Walk or cycle to school or work.  These simple steps can help improve your quality of life…and that’s what it’s all about.”

Mayor Lynch, along with representatives from Limerick Sports Partnership, local schools and community groups marked the start of the Beat the Street challenge by Walking the Three Bridges.

Beat the Street 2017 is being delivered by Intelligent Health with support from Limerick Sports Partnership and is funded by Limerick City and County Council, Sport Ireland, Healthy Ireland and the Dormant Accounts Fund.

More than 600,000 worldwide have played Beat the Street with previous games taking place in Belfast, London and other towns and cities.  Organisers behind the initiative are expecting thousands of people in Limerick to pick up a card and start playing over the course of the next seven weeks.

Anna Grant, Engagement Manager for Beat the Street said: “We’ve seen lots of excitement building in schools, businesses and groups across Limerick in the past few weeks and so we are happy to see Beat the Street finally launch here in Limerick. With lots of prizes for teams and individuals to win there is no reason not to get involved.”

To read our previous story on Beat the Street click here

To find out more about Limerick Sports Partnership click here