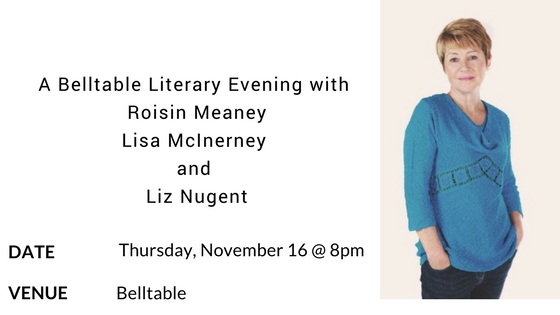 A Belltable literary evening with Meaney, McInerney and Nugent

A Belltable literary evening with Meaney, McInerney, and Nugent

After last season’s success with authors Donal Ryan, Julian Gough and Michael Durack the Belltable literary evening is back again with authors Roisin Meaney, Lisa McInerney and Liz Nugent and promises to be just as enriching.

Roisin Meaney started off as a teacher before she tried she quit her day job to write fulltime.

For the first time, these three writers come together in Limerick to read from their work.  Facilitated by Roisín Meaney, these readings are for everyone; book lovers, writers and anyone interested in the world of publishing. Both Lisa McInerney and Liz Nugent are award-winning writers. McInerney for her debut novel The Glorious Heresies. Nugent for her two novels of psychological suspense, Unravelling Oliver and Lying in Wait.

Roisín Meaney from Kerry, in 2001 took a year off teaching and travelled to San Francisco to write The Daisy Picker, which won a book publishing deal with Tivoli Books. In 2008, with four published novels under her belt, she gave up the day job to write fulltime. To date, she is the author of fourteen adult novels and two children’s books, and her works have been translated into several languages. Selected books have also been published in Australia and the US. She is currently working on the next, which is scheduled to hit the shelves in June 2018.

Lisa McInerney is an award-winning author for her debut novel The Glorious Heresies.

Lisa McInerney is a novelist, short story writer, essayist and screenwriter from Galway. Formerly an award-winning blogger, her work has featured in Winter Papers, The Stinging Fly, Granta and BBC Radio 4 and in the anthologies The Long Gaze Back (New Island), Beyond The Centre (New Island) and Town and Country (Faber). She was longlisted for the 2017 The Sunday Times EFG Short Story Award.

Her debut novel The Glorious Heresies (John Murray) was published in 2015 and explores salvation, shame and the legacy of Ireland’s twentieth-century attitudes to sex and family. Lisa’s second novel, The Blood Miracles, was published by John Murray in April 2017. She is currently a contributing editor at The Stinging Fly.

Liz Nugent is the author of two award-winning novels Unravelling Oliver and Lying in Wait.

Liz Nugent is an award-winning writer of radio and TV drama and has written short stories for children and adults.  In early 2014 her first novel, Unravelling Oliver, was published.  It went straight to the top of the bestsellers list and has been translated into nine languages. Unravelling Oliver won the Crime Novel of the Year Award at the Irish Book Awards.

Her second novel, Lying in Wait, was published in July 2016 and also went straight to number 1. It won the RTE Radio Listener’s Choice prize at the Irish Book Awards and was shortlisted for Crime Novel of the Year. On its, UK release in January 2017, Lying in Wait went straight into the Sunday Times bestseller list and was chosen for the hugely popular Richard & Judy Bookclub Spring 2017 list and won the Reader’s Choice award for that season. Liz’s books have been acquired for publication in the U.S. (2017 & 2018) by Gallery Books, an imprint of Simon & Schuster.  Liz’s third novel, Skin Deep, will be published in the UK and Ireland in March 2018. TV and film rights are currently under negotiation.

The Belltable Literary evening with Meaney, McInerney, and Nugent will take place on Thursday, November 16 at the Belltable at 8 pm.

Tickets cost €12 and concessions €10 and can be bought online at Limetreetheatre.ie

To buy tickets to the Belltable literary evening click here