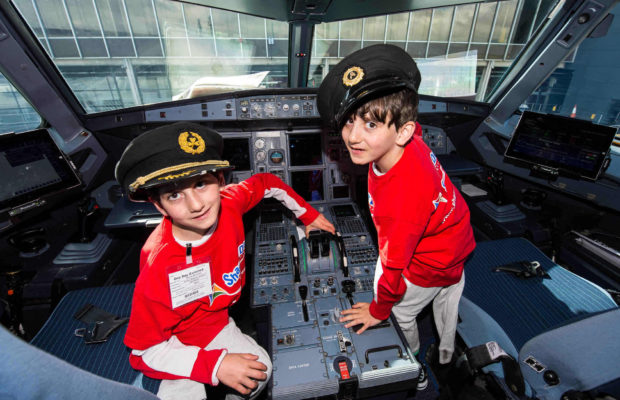 Shannon Airport got new taskmasters today as Ireland’s most special twins, the Benhaffaf twins, Hassan and Hussein, took on the role of Operation Managers at the historic airport. Pictured in the cockpit of an Aer Lingus jet are Hassan, left, and Hussein Benhaffaf. Photo: Diarmuid Greene / True Media

Shannon Airport got new taskmasters today as Ireland’s most special twins, the Benhaffaf twins, Hassan and Hussein, took on the role of Operation Managers at the historic airport.

The Cork twins, who were conjoined at birth but survived thanks to a miraculous operation to separate them, have spent the last eight years of their lives in and out of surgery.

But today the courageous twins, who have already had 45 operations and are facing a lifetime of surgery, landed at Shannon and boldly took to their temporary task as operations managers.

The initiative was all part of a weekend treats in the region put together for the twins by Share A Dream founder Shay Kinsella after he met the boys and their mother Angie.

Today’s visit to and tour of Shannon Airport was one of the high-points of their time in the area. It followed a visit yesterday to ‘Dreamland Limerick’ – the first fully accessible, inclusive fun center in Ireland, before checking into the 5 Star Savoy Hotel for an overnight stay.

The courageous Benhaffaf twins got the VIP treatment as they got to go behind the scenes to see how Shannon Airport works.

This included a visit to the fire station where they met with Fire & Police staff and got to become honorary firemen. Next stop was an overview of the airport’s security screening and operations facilities before being given a quick instruction on the life of a pilot. For this element, they enjoyed a tour of an Aer Lingus plane and a special visit to the cockpit where they met Aer Lingus Captain Gerry Guthrie. The VIP treatment continued when the twins and their family visited the Airport’s Presidential Suite where they signed the visitor’s book and wrote their names alongside famous dignitaries who have visited the airport over the years.

Said Airport Operations Director Niall Maloney:  “We’ve had VIP’s coming through Shannon for decades, among them some of the most famous people in the world but I’m not sure we’ve met any as special as these two boys.

“Airports are magical places for youngsters but the boys are magical in their own right and we were absolutely delighted to have them.  This was about a treat for them but it was a treat for us also. They’re an inspiration and Shannon Airport is now officially a big fan of theirs. We’ll be keeping up to date with their progress and wishing them well every inch of the way. As our chosen staff charity for 2018, we were delighted to support the Share a Dream Foundation in making the boys’ wishes come true.”

The Benhaffaf twin’s mother Angie said:  “We’ve had a brilliant two days and today at Shannon capped it all. The airport staff couldn’t have been more helpful. It’s a busy day for the airport but they were so generous with their time and the boys loved every minute of it. Shannon Heritage has given us family passes to their visitor attractions at Bunratty Castle and Folk Park and King John’s Castle and we are really looking forward to availing of these.”

Said Shay Kinsella, Share A Dream Founder:  “This has been a great two days for the boys and they deserve it.  Shannon Airport came up trumps for them.  We just put the ask into the airport and Niall Maloney and all of the airport staff couldn’t have been more welcoming.  It’s easy to know why Shannon has such a strong community reputation; they really get behind you as we’ve seen today with the boys. They smiled from ear to ear and they have made true friends with the boys and their family for sure.”

To find out more about Dreamland Limerick click here

Related ItemsBenhaffaf twinsDreamlandShare a Dream
← Previous Story Be part of the Clionas Foundation Great Limerick Run Purple Platoon!
Next Story → CARI Pop Up Shop 2018 is back this April in the Parkway Shopping Centre