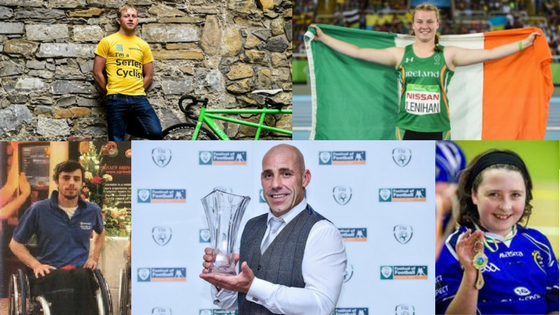 Beyond Limits takes a deeper look into the inspiring lives of five young men and women who have faced challenges and difficulties in life yet found the will, confidence, and ability to succeed in both life and sport.

‘In sport, athletes entertain us with their strength and competitive spirit. Then, there are those who inspire us with their ability to overcome adversity’

Connie Broderick’s new series takes a deeper look into the inspiring lives of five young men and women who have faced challenges and difficulties in life yet found the will, confidence, and ability to succeed in both life and sport. The series crosses a range of sporting disciplines including GAA, Soccer, Pool, Para-cycling, and the Discus Throw celebrating the uplifting stories of those who are born or live with physical disabilities. Out of their disability comes the ability to excel.

The first episode of Beyond Limits airs on Spin South West at 10.20am this Saturday and the remaining four will air over the following Saturdays.

Each 15-minute programme will feature an in-depth profile of the selected person and the social fabric that has impacted their lives as we document their ability to face, overcome, and bounce back from adversity.

Beyond Limits will offer the listener an insight into the lives of these people, the highs and lows, the hard work, the relationships, and the significance of sport in their lives. It will also examine how collectively they are a true picture of strength thus fulfilling the objectives of the scheme in regards Irish culture, heritage and experience.

Simon Baker was a plasterer until a workplace accident ultimately saw his leg amputated. In 2008 after a battle with depression Simon realised that he needed a challenge to turn his life around and this took the form of entering the Dublin City Marathon. Completing the marathon he earned himself a place in the Guinness Book of Records. In 2011 he walked from Dublin to Limerick in 5½ days on crutches and on one leg, while also that year with the help of the FAI he set up Ireland’s first Amputee Football Team. Today he holds the position of Chairperson of Ireland’s Amputee Football Team

Sixteen-year-old Noelle Lenihan made headlines back in October when she secured a silver medal in a combined class event at the World Championships in Doha after breaking the discus F38 world record. Noelle who has Cerebral Palsy is now heading to Rio this September representing Ireland in the Paralympics.  She has been identified as one of ten rising stars for the Games, which features the young athletes who the International Paralympic Committee believe could make a big name for themselves on the world’s biggest stage this autumn.

Johnny Quaid from Athea, Co. Limerick has packed more into his life in the last few years than any other able-bodied person despite being confined to a wheelchair following a back injury when he was 17 years old. He represents Ireland in the World Pool Championships each year and secures an 8th/9th position in these. He returned to school following his injury and did his leaving cert and went on to college and studied media.

Tipperary man Peter Ryan was a promising young hurler who represented his county at minor level and was playing senior Hurling with local club Upperchurch Drombane from the age of 17. At the age of 19, Peter was diagnosed with a rare genetic disorder with symptoms that usually begin with a sudden loss of central vision. It often starts in one eye and then several weeks’ later causes’ sight loss in the second eye. Once over the shock of dealing with such a diagnosis, Peter turned his attention to Para-cycling and his target is clear – Rio de Janeiro Paralympics in 2016.

Ellie Sheehy was born in November 2002 and was diagnosed within days with Spina Bifida. Ellie will be fourteen years old this November and has managed her disability remarkably well. Playing wheelchair Camogie with the Treaty Warriors in Limerick, she has won two All-Ireland medals and represented Munster in the Inter-Provincial tournaments. In 2012 Ellie was named Camogie Player of the Year at the Wheelchair Hurling/Camogie All Star Awards in Dublin.