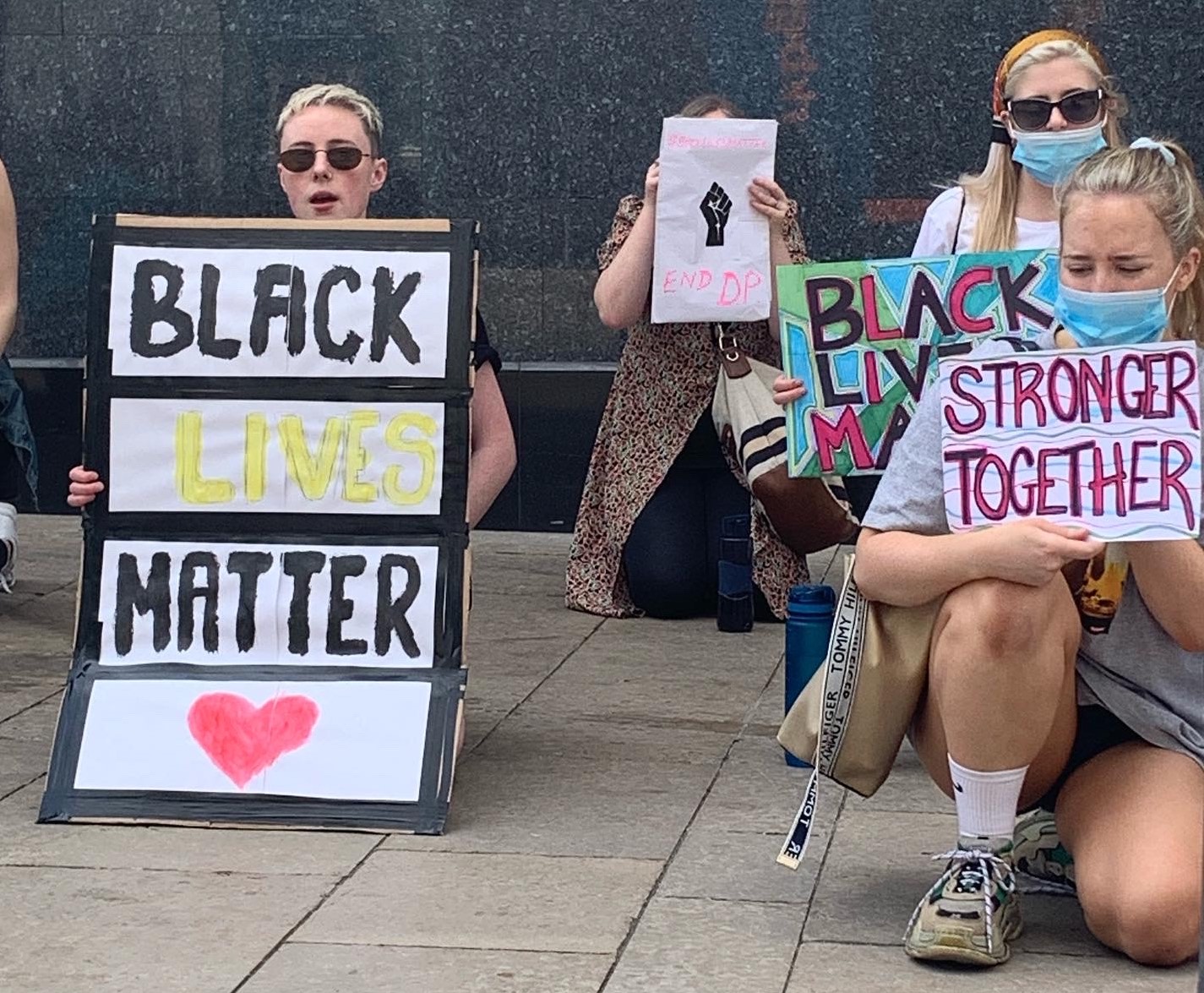 During one of the hottest days of the year in Ireland on Monday, June 2, 50 people came together in Limerick on Bedford Row following the death of George Floyd. The protest was attended predominantly by young people aged 16-30, carrying signs calling for an end to racism, an end to direct provision and in solidarity with the Black Lives Matter campaign.

For more than one hour, the group chanted phrases like “black lives matter” and “I can’t breathe” representing the words said repeatedly by George after he was being arrested and trying to breathe, minutes before his death.

On May 25, police officers in Minneapolis, USA, arrested George Floyd, a 46-year-old black man after a deli employee called 911 accused him of buying cigarettes with a counterfeit $20 bill. Footage of the arrest shows a police officer, Derek Chauvin, kneeling on Mr Floyd’s neck while he was pinned to the floor for nearly nine minutes. The independent autopsy says Floyd died of “asphyxiation from sustained pressure” when his neck and back were compressed by Mr Chauvin during his arrest. Cities across the US have been rocked by protests over the death in recent days. The murder encouraged protests not only all over the country but all around the world.

A protester carrying a sign calling for an end to direct provision.

Two protests took place in Dublin yesterday – one at the US Embassy and another at the US Ambassador’s Residence in Phoenix Park. Similar protests have taken place around the world, including in New Zealand, Australia, the Netherlands and the UK. Dozens of cities across the United States remain under curfews at a level not seen since riots following the 1968 assassination of civil rights activist Martin Luther King Jr.

One of the Limerick protesters Elysha Folan said, “As a white person I understand the privilege of my skin tone. So why don’t people of colour receive the same? It shouldn’t have taken the murder of George Floyd for us to finally listen up and demand change. What happened on May 25 should never have even been a thought in the police officers mind.

No one wants to have to burn buildings and riot but governments and the past has unfortunately given people no choice. People won’t stand for it anymore. I’m 22 years old and I don’t want to have to protest when I’m 60. I don’t want to have a family in a world of racism and police brutality. Everyone in the world right now needs to be vocal. Posting one or two things on social media just won’t cut it anymore.

If you want to be a part of the fight you need to educate yourself, donate to those who need it and get out there and protest wherever you can. Don’t be silent, use your voice because too many have already been taken.”

In Limerick, an organisation called Doras is an independent, non-profit, non-governmental organisation working to promote and protect human rights since the year 2000. Their core areas of work include Direct Support, Advocacy & Campaigns and Integration Planning. People living in Ireland in Direct provision are among the most marginalised and mistreated communities in this country. But with an escalating number of cases of Covid-19 being confirmed and the unsuitable nature of accommodation in which they are housed coming under increasingly tough scrutiny, a better deal may hopefully be on the way for asylum seekers.

A Black Lives Matter protest which was due to take place in Limerick has been cancelled – with a rally taking place online instead.

The event was supposed to take place at Arthur’s Quay Park from 2pm, but last night, organisers moved to cancel the protest.