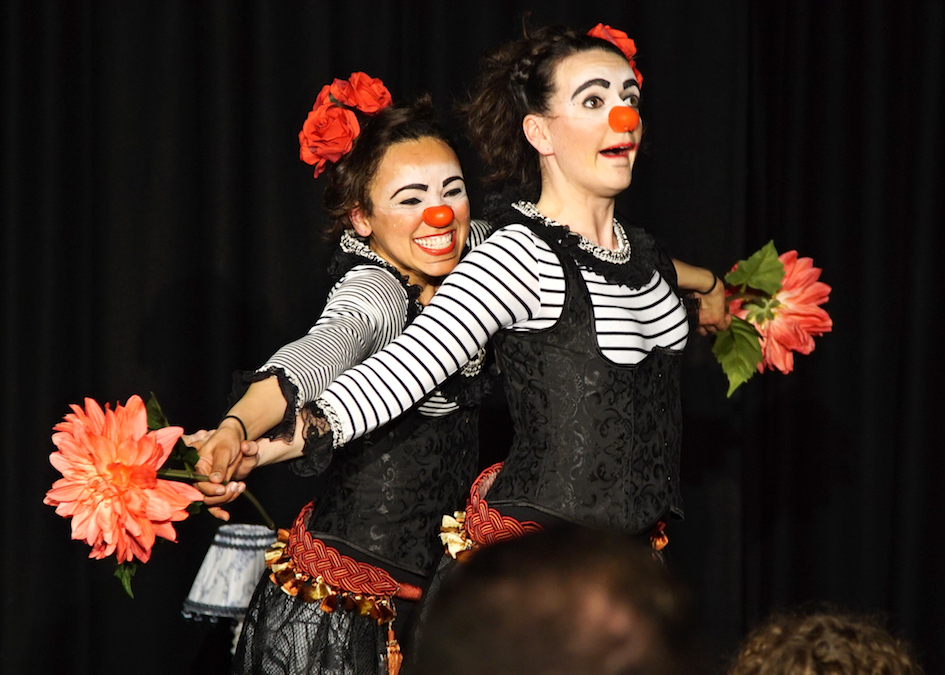 NOSThree is a collective of three Brazilian artists who have come to Limerick to perform their brand new show, Blooming Out in this years much anticipated Limerick Fringe. Blooming Out is a clowning play created and performed by Bianca Bertalot and Maria de Jesus Rocha on the meaning of the feminine universe. They will be performing this exquisite piece for three days only in the Belltable Hub. Opening night will be Thursday, April 5th at 6.30pm and will continue until Saturday, April 7th at 8pm.

Using clowning techniques, the actresses embrace the disparate themes of this universe including fragility, physical transformation, and love; all of this is covered in a light, comic and poetic way.

The life of every woman is filled with great discoveries and endless transformations. Blooming Out is a clowning performance that only uses non-verbal language to explore some of the most intriguing moments in a feminine universe. Beauty, periods, oppression, maternity, taboos, love and growing old, are just some of the many fascinating and difficult themes that build the intriguing story of this play. Blooming Out is, in essence, a celebration of being a woman.

Both actresses are well traveled and are constantly developing their skills in the arts. Co-creator Bianca Bertalot has been specialised in clowning since 2005. She has given workshops, performed and collaborated in community projects relating to clowning for just as long. Just last year, she received funding from the Arts Council that allowed her to develop her show “Cinco Coisas”.

Maria de Jesus Rocha, adds her own specific set of skills to the show with her work as an actress, acting coach and contemporary dancer. Since 1992 she has worked and studied in Brazil and Portugal to develop her artistic activities, especially in the fields of pre-expressive techniques and clowning.

João Ricardo Aguiar, the third member of NOSThree is an actor, director and author. He has been performing since 1996 and has received the award for “Best Play of the Year” in Portugal’s National Theatre Contest 2010 for his play “Salvo Conduto”.

For more information on Limerick Fringe’s Blooming Out, go here.