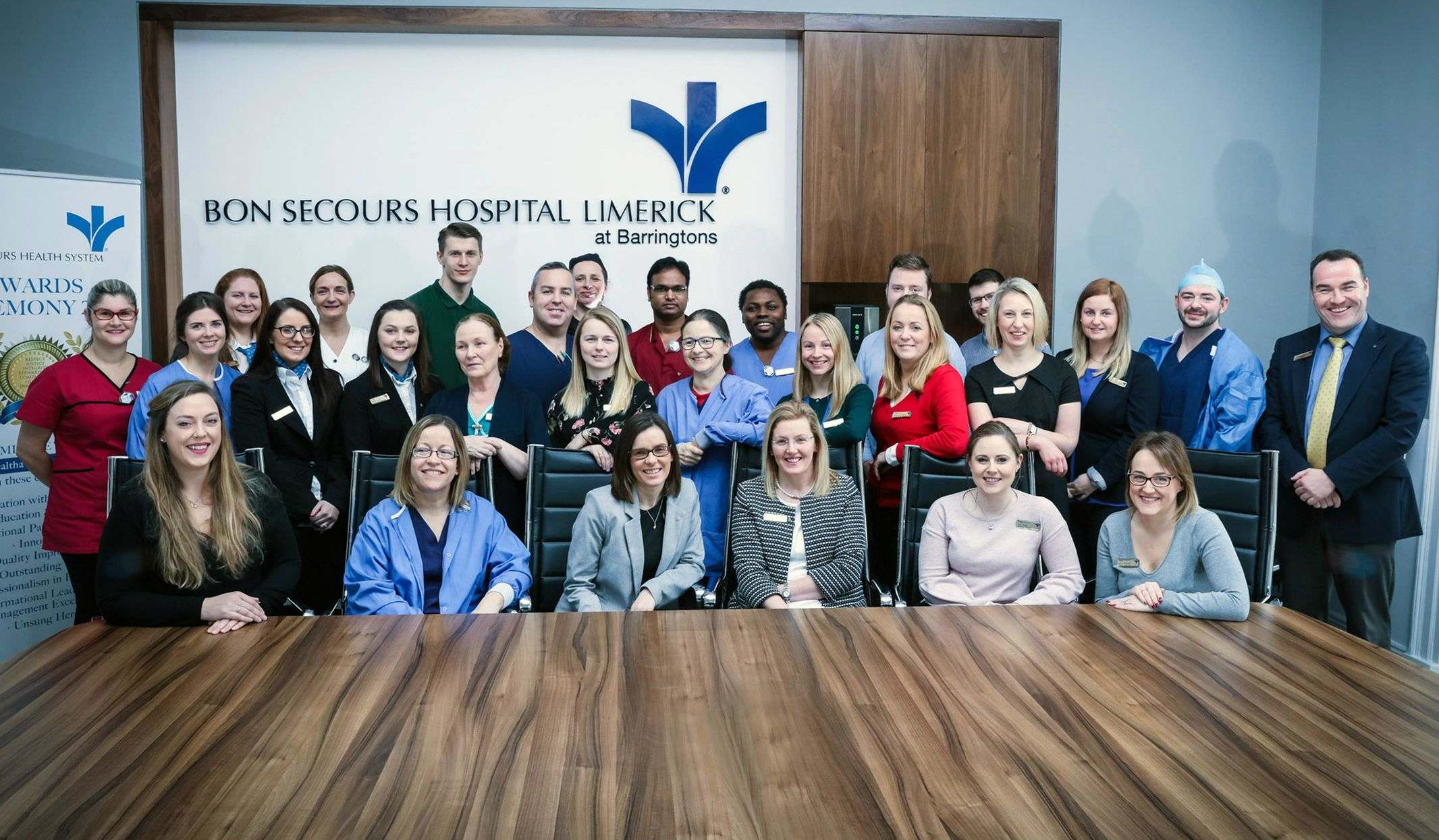 Bon Secours Hospital’s team pictured for Barringtons one year anniversary which will be celebrated this week, following the announcement of the acquisition of Barringtons Hospital Limerick last February, 2017.

This week marks the first year “birthday” celebrations for Bon Secours Hospital Limerick at Barringtons. In February 2017, Bon Secours Health System acquired Barringtons Hospital and in the past year, the hospital has become the new name for private healthcare in Limerick.

The hospital is comprised of 50 beds, over 160 staff and 75 Consultants. Care is provided to over 13,000 patients annually and over 20 specialities are catered for.

Mr. Bill Maher, CEO of Bon Secours Health System said, “I am delighted to celebrate the 1st Year of Bon Secours Hospital Limerick and would like to take this opportunity to thank all of our staff and colleagues in the community for the warm welcome we have received.  There has been tremendous progress in the 1st year and myself and Jason Kenny, Hospital Manager have ambitious plans for future growth, expansion of services and to play our full part in the local community.”

Mayor of the City and County of Limerick Cllr Stephen Keary wished the hospital well by saying, “I would like to wish the Bon Secours Hospital at Barringtons all the very best on their first anniversary here in Limerick. The name Barringtons has always been synonymous with first-class health care in Limerick down through the years, as a public hospital and as a private facility. That tradition is continuing with Bon Secours and I wish them a ‘Happy Birthday’ and wish them success as they continue to provide health services to the people of Limerick and the mid-west”.

Hospital Manager, Jason Kenny stated that “Bon Secours is proud to be in Limerick. In 2018 we aim to treat more patients across the specialities of Endoscopy, Orthopaedic, Urology, Gynaecology, ENT, Ophthalmology, and Dental. We are also recruiting key team members to deliver AdvancedMedicine and Exceptional Care to patients in the Mid-West Region and beyond. We will continue to develop the hospital infrastructure and this year we will complete the New Entrance, Reception and Waiting Area together with further investment in Operating Theatre facilities. The hospital is covered by all major health insurers. We are also proud title sponsors of the 2018 Great Limerick Run”.

The hospital has been active locally participating in several events such as launch events for Limerick 2030‘s Opera development site working with partners for future development of a Health Campus, Limerick Chamber of Commerce events and has been actively working in partnership with UL Hospital Group in order to meet the needs of patients.

In addition, the hospital has sponsored Thomond House, St. Patrick’s Hostel and Enable Ireland providing “good help” to those in need, as part of the Bon Secours Health System Community Initiative Fund.