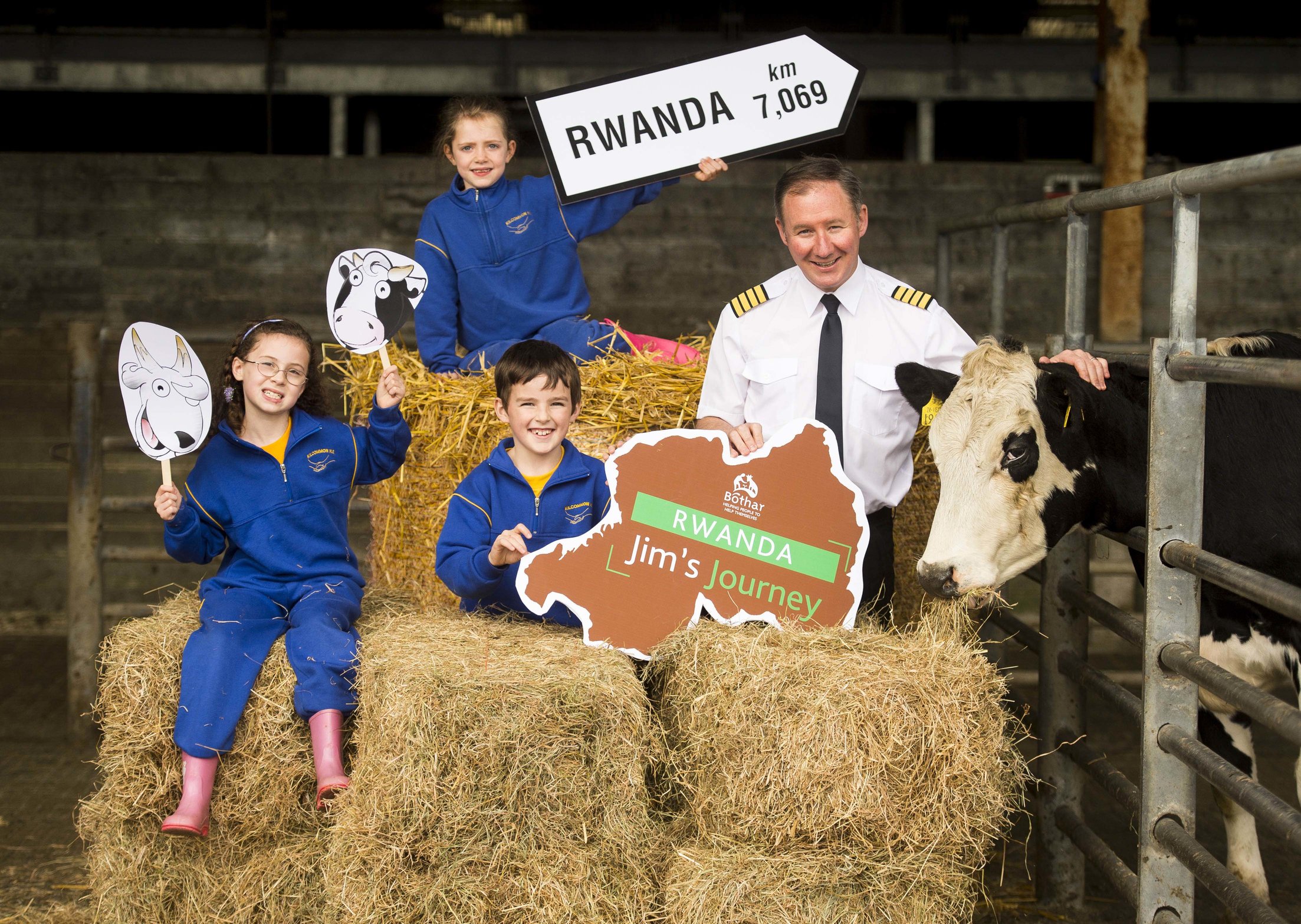 Jim Gavin swaps one high for another today as – just nine days after his third All-Ireland title win as Dublin manager – he takes to the skies as a ‘groomsman’ for 5,300 food-and-income-producing being airlifted to change the lives of almost 800 African families.

The Dublin manager was one of two ‘groomsmen’ on board the flight from Shannon as Irish International Aid agency, Bóthar carried out the biggest ever multi-species airlift of its kind in the world to Rwanda.

The Bothar airlift includes a cargo of 37 in-calf heifers, three bulls for the Rwandan Government National Bovine Breeding Scheme, 260 pigs, 100 goats, and 5,000 chicks. Also on board were 5,000 doses of Bovine Semen for the Rwandan Breeding Programme run by Bóthar’s sister agency Heifer International. Almost half of the in-calf heifers will have been hand-reared by inmates at Shelton Abbey Prison and Loughan House Open Centre as part of their restorative justice programme.

The All-Ireland winning manager joined and worked with the Bóthar team, sponsors MSD Animal Health and volunteers from earlier today at Roscrea Mart in Co. Tipperary where animals donated by farmers were brought ahead of their transportation this afternoon to Shannon Airport for the flight.

The Clondalkin man is, of course, no stranger to air travel as he is a qualified pilot, Airbus A320 trained and an Assistant Director with the Irish Aviation Authority. Speaking in Roscrea ahead of tonight’s departure he said: “I was really looking forward to this airlift but now that I’ve met with the farmers donating the heifers, the Bóthar team and other supporters, I’ve got a real sense of what goes into a trip like this.  There was such a buzz here at Roscrea but behind the excitement is immense generosity, great organisation and, at the end of the journey, there will be a great sense of hope also among the recipient families.” bothar airlift.

“Winning the All-Ireland is, of course, a privilege but this is also.  To be able to witness first-hand the transformation of the lives of some of the poorest people in the world is definitely a privilege. It was great meeting the farmers, including some back from my West Clare where my parents come from.  Their generosity is incredible, not least when farm incomes are under pressure.  They are handing over animals over that are worth up to €1,000 and at a time when many farmers are struggling to break even.”

When the Bothar airlift arrives in Rwanda, the animals – producing yields of six times what local animals deliver – will be placed in quarantine to rest and adjust to their new environment before being delivered to the recipient families.

Bóthar CEO Dave Moloney said it was the aid agency’s most important ever airlift. “It’s our 25th-anniversary airlift so that has a lot of nostalgia for us but it’s also the biggest ever multi-species airlift in the world.  It’s the fruits of many people’s labour, from our own team, to those who donated money to help purchase some of the animals, the farmers who donated them and raised them, the team at Shelton Abbey and Loughan House prisons for raising others, our sponsors MSD, Dovea , VIVA (Volunteers in Irish Veterinary Assistance) and Truly Irish pig co-op.

We’re particularly indebted to the farming community. At a time when milk prices have only started to slowly recover from a massive drop, farmers have still come up trumps by donating quality heifers. Save for other Bóthar cows already in the field in Rwanda, these will be the best cows in the entire country and will change the lives of the recipient families, whose struggle is something none of us back home here in Ireland appreciate.”

Regarding the Dublin manager’s support, the Bóthar CEO said: “We are delighted to have Jim Gavin on board.  He contacted us and said he liked what we do and offered us his support so we took our chances and asked him to join us on our 25th-anniversary airlift.”

“He’s been so supportive and was so engaging with everyone in Roscrea today. He gave freely of his time to anyone who wanted to chat with him and that was practically everyone who was here.  We also had a school from Kilcommon in Tipperary that has been involved in raising a heifer on the flight tonight and he was equally sharing of his time with them. It’s very rare a person with his profile would give of their time at a level he is.”

Seamus Maguire, General Manager of Bóthar Ark lead sponsors MSD Animal Health said: “MSD delighted to support Bóthar Ark with this fantastic project.  Giving people who have a daily struggle for survival a gift of quality food and income producing Irish animals is a life-changing intervention. Bóthar is doing incredible work and we look forward to keeping up to date online next week on what promises to be a very special trip.”

The public can keep up to date with the Bothar Airlift journey here  www.bothar.org where daily video and blogs detailing the progress will be posted #jimsjourney

Bóthar was established in Limerick in 1991 as an initial one-off gesture of airlifting cows to 20 families in a poverty-stricken region of Uganda to mark the city’s ‘Treaty 300’ celebrations.  Since then it has grown into one of Ireland’s leading international NGOs.  Over the past 25 years, the organisation has delivered thousands of animals annually to families in 35 countries across Africa, Asia, South America and Eastern Europe.

While the organisation started out with an airlift of Irish heifers, it broadened its livestock donations in the early years to include Irish goats and pigs.  It now also purchases the water buffalo, camels and bees in project countries.

Top of the list of donations is the Bóthar ‘Global Village’ – a herd including a dairy cow, two dairy goats, three dairy camels, four pigs, five flocks of hens and six bee hives that will be distributed among 17 poor families.  Donations to Bóthar start at just €10 for a share of a snail farm and run right up to the €5,000 for the Bóthar Global Village.

Read more about Bothar and how you can help here.

Aspiring writers called for Publishing Day at UL this October 15