By Richard Lynch on November 19, 2012@richanthon 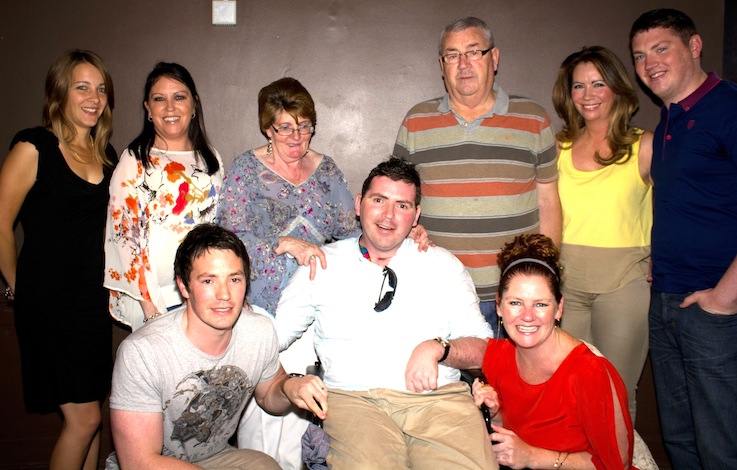 It is not yet the miracle they all would have hoped for, but the family of a Limerickman were keeping their fingers crossed this week after he made his first tentative steps to walk again. Brian Hogan, 35, from Ballykeeffe, has been waiting months to see if there was any improvement in his condition after receiving stem cell infusions in China this summer, in the hope that he might be able to see and walk again. While the family were told by doctors in Beijing that it could take six to eight months for the controversial treatment to work, they are already beginning to see some small signs of improvement. Now four months on since the treatment, his sister Nevis was delighted after Brian was able to give her a hug with both arms recently. This week he was able to walk for the longest period since he was injured in an unprovoked attack in the UK three years ago. On July 19, 2009, he suffered severe brain damage and was left blind and partially paralysed after the attack in Nottingham, where he was working as a senior quantity surveyor. After the punch was thrown, Brian hit his head off the pavement and fell unconscious. He regrets that when he woke up he told the ambulance personnel that he was fine and went home, unaware that his brain was bleeding internally. “I am finding that I have a lot more mobility, and have a lot more sensation in the left side of the body,” said Brian. He wouldn’t go as far to calling his progress “a breakthrough”, but he’s trying to “conquer” his challenges every day. Brian, who lives in an acquired brain injury accommodation in Clarecastle, said his family’s support has helped him in his daily fight to reclaim his life. While his mobility has improved, regaining his sight is Brian’s greatest motivation. He now gives motivational talks to pupils in secondary schools in Limerick about the dangers of alcohol, and especially the dangers of hitting someone. He says he warns pupils that “if you get a bang on your head, don’t assume you’re fine.” In a touching video, Brian’s family posted the scenes of him walking this week at a website dedicated to his journey, www.iheartbrian.com to show his many supporters who donated funds to help fly him to China. With his brother Jonathon by his side, he was helped out of his wheelchair and walked close to 20ft, the farthest he has walked in recent memory. I love the Hogan family. They show what family is all about. Brian is an inspiration and I am rooting for him. 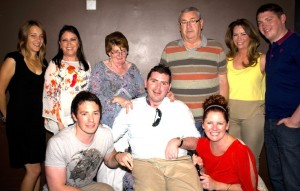 Limerick man Brian Hogan pictured with his family at his Bon Voyage party before he went to China for surgery. Photo Laur Ryan