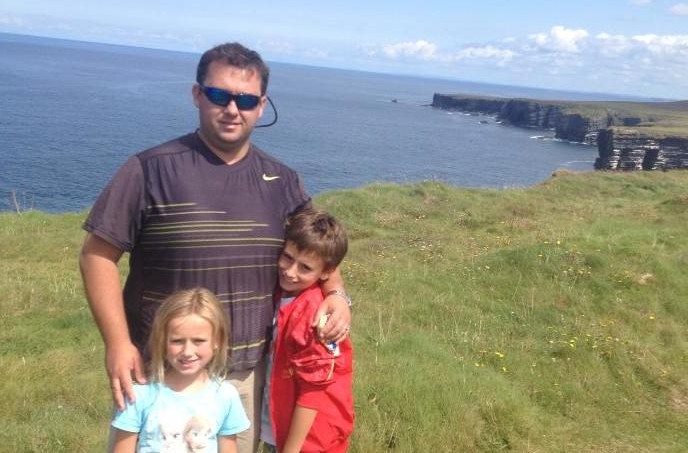 Help to bring Jack and Sarah home to Ireland

Pictured: Jason Corbett with his two children Sarah and Jack.

Jason with his sister Tracey Lynch, who is currently in the US, making every effort to bring her family home.

The family of Limerick man Jason Corbett (39) are fearful that they will have to wait months before they can return to Ireland with his children. The children, Jack (10) and Sarah (8), have been put in the custody of their stepmother, who is a suspect in the case.

Tracey Lynch, Chief Executive of Tait House in Southill, flew to North Carolina just under a week ago after her brother Jason was found dead in his home in Wallburg, North Carolina, on Sun, Aug 2.

Jason had the children with his first wife, Mags Corbett, who died in 2006 after suffering an asthma attack.

Tracey, who now has legal guardianship of her brother’s two children, has run into legal trouble, in terms of having her guardianship recognised outside of Ireland.

The two children are currently in the custody of Jason’s wife, who is a suspect, and Jason’s family in Limerick are desperate to have him and his children back in Ireland.

Mrs. Lynch said in a statement, issued through a friend of the family: “We will be staying in America until we can bring my brother and his children home. These children are Irish citizens, they hold Irish passports and all the family wants is to be able to bring them home together with their father.”

Already there are big legal fees mounting up. A fundraising campaign, titled ‘Jason’s Journey’ (see donation details below), has been created and shared by a number of people over a variety of social media platforms, to aid the Corbett family in dealing with the legal and travel costs that they will face. Support for this campaign has been overwhelming, and every donation made, no matter the size, is deeply appreciated by the Corbett family.

Mary Fitzpatrick, who can wholly empathise with the Corbett family’s grief after losing her son Michael after an unprovoked attack in 1999, is leading the fundraising drive with the support of Tracey’s friends, Simone Dillon and Catherine Bourke.

Jason with his twin brother Wayne, in happier times.

Speaking about the fundraising drive, Mary said: “I kept waiting to hear if somebody was going to do something to support them because it does cost a lot of money and Limerick is very good for coming out and supporting families in crisis. I think I know from the similar experience that I had that Limerick is very good to help their own.”

Please help to bring Jack and Sarah home to Ireland. Use the hashtags #JasonsJourney #BringJackSarahHome to get the subject trending on Twitter @JackSarahHome

A Facebook page has been set up in memory of Jason, and as a forum for offering information about the fundraising campaign and the efforts made to bring Jason and his children back home.

An online petition was also set up for the public to sign, to help Tracey, and her family, return home with Jason and his children.

To DONATE to Jason’s Journey fundraiser:

OR USE BANK TRANSFER DETAILS BELOW: