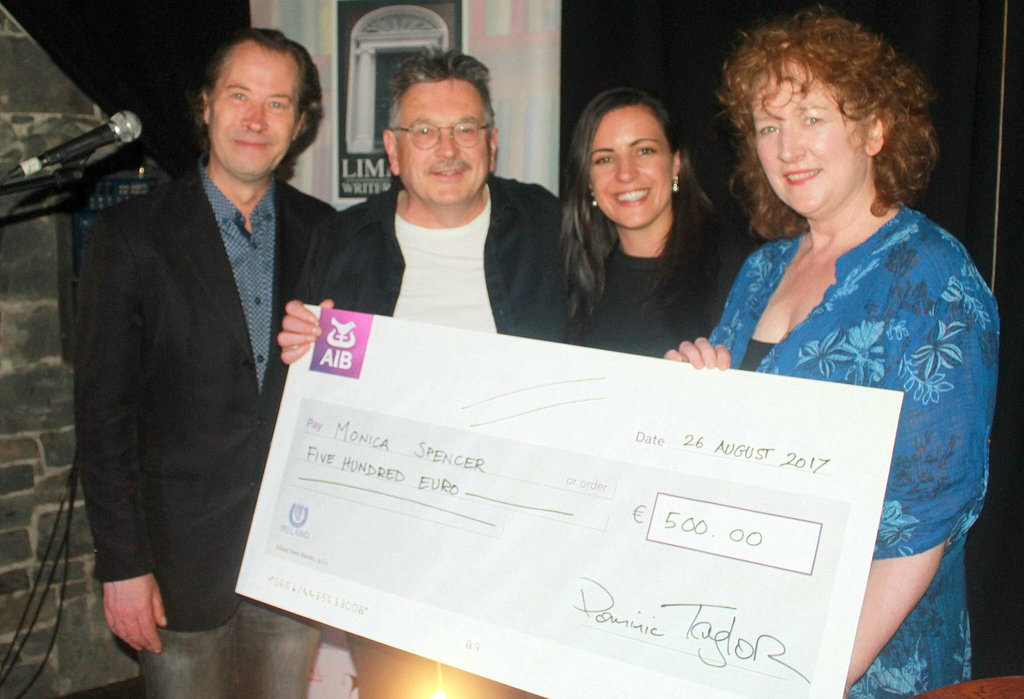 Monica Spencer, Bring your Limericks to Limerick winner 2017 pictured with MC on the night Myles Breen and representatives of the Limerick Writing Centre. Picture: Chris Barr

Monica Spencer was crowned the Bring your Limericks to Limerick winner 2017 with her witty Limerick.

Monica was awarded €500 and a certificate for her winning Limerick. She said about her win “I think the prize encourages people to enter the competition. It’s a fun festival to be part of and the final in Dolan’s Warehouse was a great night, everyone really enjoyed. Winning anything is always great! I would encourage everyone I know to enter next year. I am delighted to have entered it”.

Monica had no real experience with poetry and the Limerick Writing Centre with her expertise being in theatre and performance. However, the Bring your Limericks to Limerick winner 2017 said that it was an amazing experience. ”I was delighted to win. It was interesting to see the mix of people who entered the competition. There were many of them who had no connection to writing at all”.

The winning Limerick was:

Came by Sarsfield, asleep, in Murroe

As he opened his eyes

She did straddle his thighs

Monica said the winning Limerick was a portrayal of what she sees as Limerick. ”There is probably nothing more Limerick than Sarsfield. He has been written about before and it just kind of came to me. I was thinking what could I say that would be funny about Patrick Sarsfield”.

Dominic Taylor of Limerick Writers Centre who ran the event tells me, “If people had relatives abroad who wanted to enter that would be great. It’s the sort of festival that could become huge. You don’t need to have any poetry skills you just need to be aware of the rules associated with rhyming in the Limerick. It would be great to have Limerick take ownership of the poem again. We want to make this Festival an International success.”

2017 Bring your Limericks to Limerick International Poetry Competition, was a wonderful three day festival of literature, arts and culture.

The competition was made an international event in 2013 as part of The Gathering celebrations in the University of Limerick and was an enormous success.

Since then over 2,000 entries have been received for the competition, from all over Ireland and the world, with finalists turning up on final nights to do battle for the cash prize fund.

The Limerick is a verse form which originated in Croom, Co Limerick in the 18th century. It is a verse which must contain the following elements:

Five lines
Lines 1,2,5 must rhyme
Lines 3 and 4 must rhyme
A good Limerick will have a clever unanticipated punch line as line 5 will often have puns, runnerword play or a witty feature as part of it.